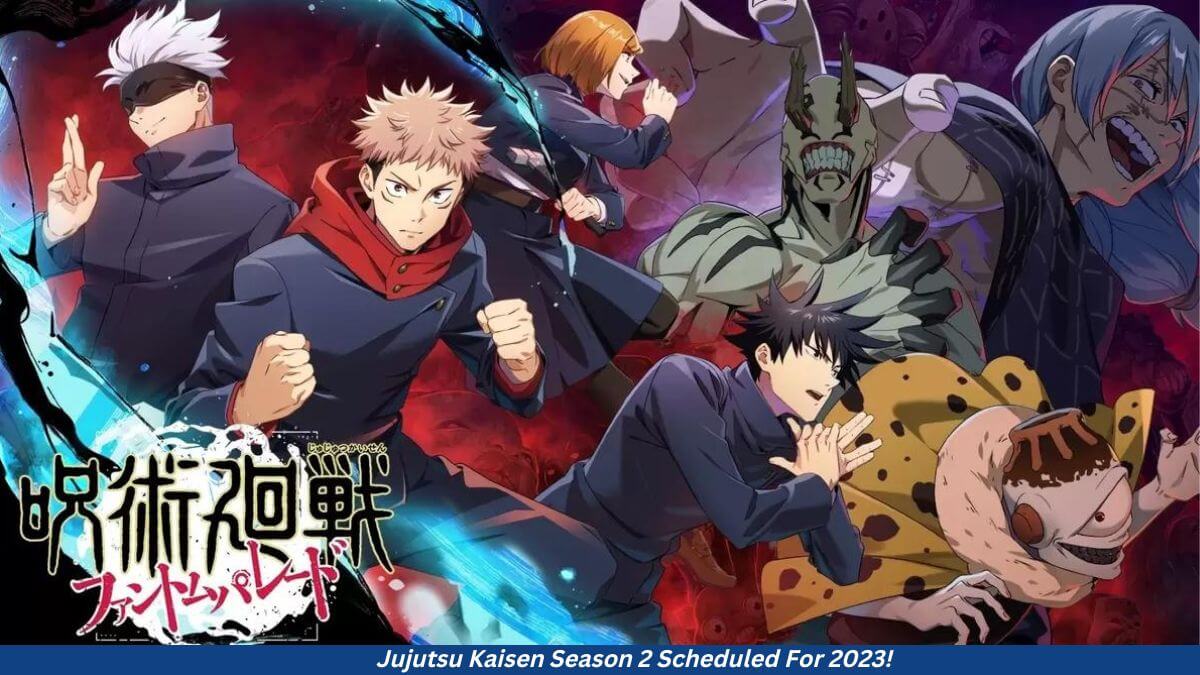 Anime has become extremely popular over time and most of it is inspired by Manga series. One such Anime that rose to fame is Jujutsu Kaisen which was released in the year 2020 and received a lot of positive reviews from the audience. Jujutsu Kaisen season 2 release date has not been confirmed yet but we do know that the show is going to be available for the audience to watch in the year 2023.

The show revolves around a high school student who decides to join an organization full of sorcerers with an agenda of killing a powerful curse. The Jujutsu Kaisen season 2 release date has not been officially announced yet but the new season is going to be out soon.

Further in this article, we will get to know more about the Jujutsu Kaisen season 2 plot, cast, spoilers, trailer, where it will be streamed, and more.

The anime series Jujutsu Kaisen is directed by Sunghoo Park and is inspired by the Manga series written by Gege Akutami which has the same title as the anime. The Manga series has a total of 20 volumes and MAPPA is the studio responsible for the anime production of the series.

The scripting of the series is done by Hiroshi Seko and the first season has a total of 24 episodes. The show was revived for a second season and this announcement was made earlier this year in the month of February.

Jujutsu Kaisen season 2 release date has not been officially announced as of now but we do know that the new season is going to premiere in the year 2023.

The news of the revival of the second season of Jujutsu Kaisen was announced on February 12, 2022, and there is a lot to look forward to. Jujutsu Kaisen season 2 release date has not been confirmed yet but we do know that the show is going to be available for the audience to watch in the year 2023.

The first season premiered towards the end of the year 2020 and was concluded in the month of March 2021. The production studio of the show is going to be MAPPA and the series will be licensed by Crunchyroll for its streaming outside of Asia.

The anime has received a lot of love and it also won the prestigious Tokyo Anime Award for Animation of the year in 2022 itself and it was also the recipient of the “Anime of the Year” award at the 5th Crunchyroll Anime Awards. The series has received various accolades up until now and is all set to adapt the remaining chapters of the manga into a new season which will be premiering soon.

Jujutsu Kaisen Season 2: What Chapters Will It Adapt?

The Jujutsu Kaisen season 2 plot has not been revealed yet but we do know that the second season is going to adapt the Gojo’s Past arc. The first season adapted 6 arcs, leaving out the first arc called the Cursed Child Arc since that will be the inspiration for the upcoming Jujutsu Kaisen movie.

Season 1 was concluded at the Death Painting Arc and the second season will pick up from where it left and will start with the adaptation of Gojo’s Past Arc. Hence the new season will include Gojo and Geto taking the Star Plasma Vessel to Tengen.

It is also reported that the second season will include the Shibuya incident which is present in chapters 79 to 136 of the manga series. The manga readers have a fair idea about the new season’s plot and the ones who have only watched the show are definitely in for a treat.

Where To Watch Jujutsu Kaisen Season 2?

Jujutsu Kaisen season 2 streaming will take place on platforms including Crunchyroll, iQIYI, and more. The licensing of the show is done by Crunchyroll, Medialink, and Viz Media.

The original network of the series is the Japanese News Network. The first season was also released on Japanese DVD and Blu-Ray; hence, we can expect the second season to be also released in the same manner once its official release date is confirmed.

All 24 episodes of the first season are currently available on Netflix but there is no confirmation of whether Jujutsu Kaisen season 2 streaming will take place on the same or not.

Who Will Be Appearing In Season 2?

Jujutsu Kaisen cast includes the following characters along with their voice actors.

Jujutsu Kaisen season 2 cast has not been revealed as of now but it is expected that the new season will revive most of its main characters including Yuji Itadori, Satori Gojo, Megumi Fushiguro, Nobara Kugisaki, Ryomen Sukuna, Toge Inumaki, Kento Nanami,Panda, Aoi Todo, Maki Zen’in and more.

As mentioned earlier, Jujutsu Kaisen season 1 has received a lot of attention and appreciation and avid manga readers are eager to see how the anime adapts the remaining arcs of the manga.

The audience took to social media to express that they were deeply satisfied with season 1 and are hoping to see what season 2 will bring to the table and also that it does justice to the manga series as well.

The readers have a fair idea of what’s next and know that they are in for a treat with the remaining chapters that are going to be adapted into the series.

What To Expect From Jujutsu Kaisen Season 2?

The Jujutsu Kaisen season 2 spoilers have already given us an idea about the Arc that is going to be depicted in the new season and hence we will see Gojo in action.

It is only fair that the audience expects great things from the new season since there is a lot of potential and enough material for the new season to be as good, hopefully even better than the first season. The audience can expect to be entertained thoroughly by the new season.

Jujutsu Kaisen season 2 episodes are not revealed yet but we do know that the first season had a total of 24 episodes. Suppose the new season also follows a similar pattern to its predecessor and looking at the material that is available for the adaptation. In that case, it is safe to assume that the new season will also have around 24 to 26 episodes that will stream on JNN and Crunchyroll.

When Will The Trailer Out?

Jujutsu Kaisen season 2 trailer has not been officially released yet but it is expected to be out once there is a confirmed release date for the new season in the year 2023.