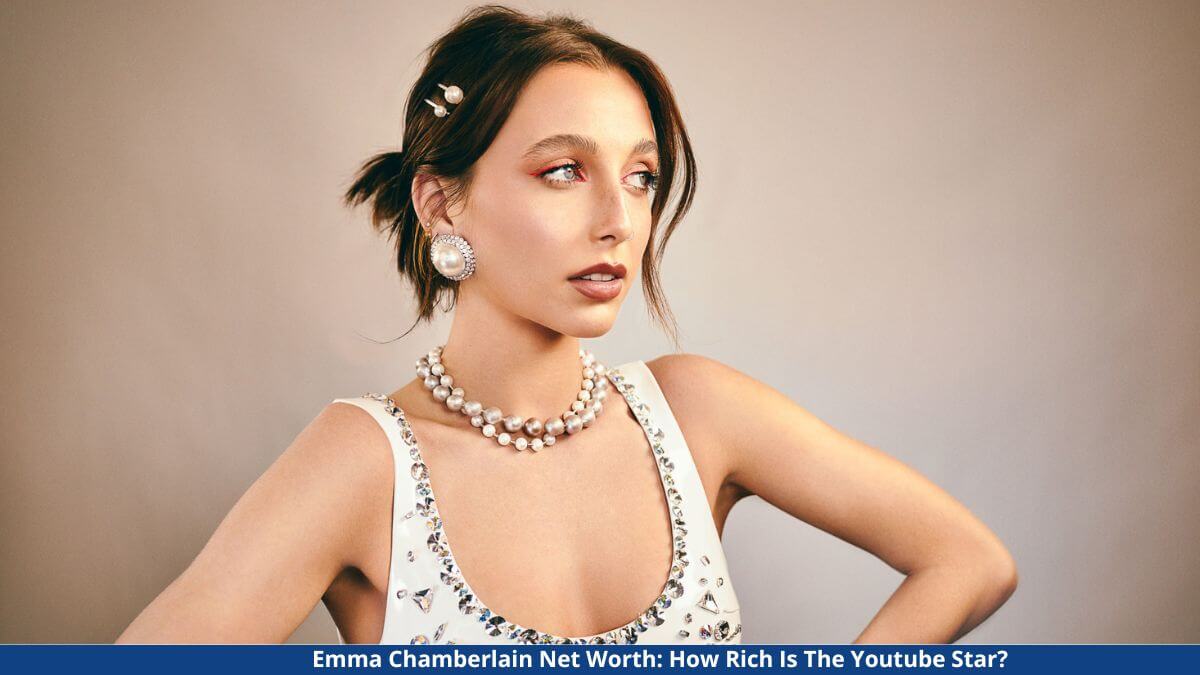 Every month Emma Chamberlain surprises us with something. This time the YouTube star has blown our minds with the interior design of her beautiful house in Los Angeles. Emma Chamberlain currently has a net worth of 90 million US Dollars.

Emma Chamberlain is known for her vibrant personality but the last thing that people have expected from the 21-year-old YouTube star is a house that looks aesthetically pleasing.

As aesthetic and beautiful as Emma Chamberlain’s house seems to be, it also screams money. This made people wonder what might be the net worth of the 21-year-old woman who raised all her wealth and fortunes through the internet. Get to know Emma Chamberlain’s net worth and more about her personal life in this post.

Emma Chamberlain was born on May 22, 2001, as the only child of Michael John Chamberlain and Sophia Pinetree Chamberlain. Emma was born and brought up in San Bruno, California. Her parents got divorced when she was 5 years old but they had a healthy relationship with each other.

The YouTuber said that her parents loved her very much but they also struggled financially. Most times the Chamberlain family wasn’t able to go to a movie and have food at their favorite restaurant because they didn’t have enough money.

Emma started watching YouTube at the age of 6, shortly after her parents got divorced. Emma says that YouTube videos made her happy at that time and it has helped her connect with people. Emma Chamberlain attended the Central Middle School in San Bruno, California and then she attended Notre Dame High School.

When Emma was in her sophomore year, she started creating content for her Instagram which mainly included videos of her and her friends dancing to songs that they have found on SoundCloud. For Emma, posting videos on Instagram was happiness and when her school’s admiration banned her from vlogging on school premises, she dropped out of Notre Dame High School with her parents’ support.

Emma Chamberlain currently has a net worth of 90 million US Dollars. Emma started her career on YouTube as a vlogger and then she ventured into many businesses and partnerships with luxury brands like Levi’s and Louis Vuitton.

The social media star earns up to $60,000 for promoting brands on her social media, which is huge earning if you really consider it. The internet personality’s monthly income is $430,000 and her salary is $60,000. Emma Chamberlain has earned over 4 million US dollars through YouTube and she also has many assets that add to her long list of wealth.

Must Check: Trevor Noah’s Net Worth- How Much Does Hosting The Daily Show Pay?

Even though Chamberlain was very anxious when he posted her first video, she slowly started loving it and posting more videos about travel diaries, story times, DIY, shopping hauls, and more. Within a few months, Emma started gaining a lot of subscribers on YouTube and became a famous vlogger.

In 2018, Emma Chamberlain moved to Bay Area, Los Angeles, and formed a squad with famous YouTubers James Charles and The Dolan Twins.

She posted a video with fellow YouTubers that was titled ‘a road trip to vegas’. This video of her gave her massive popularity and millions of people watched it. The four YouTubers were featured in the YouTube rewind 2018 for their video and they were also nominated for the 2019 YouTube Ensemble Shorty Award.

The same year Emma Chamberlain landed a collaboration with the shopping app Dote and in early 2018, she was sent to Texas by the team of Dote to attend the Coachella Valley Music and Arts Festival along with many other YouTubers with whom she formed the group ‘The Girdies’ to represent the shopping app.

In July 2018, Dote released a clothing line created by Emma with the name Low Key/ High Key Emma and it was a massive success. The YouTube star cut ties with Dote after controversies surged about the company being racist.

After expanding her career on YouTube, Emma Chamberlain slowly started stepping into the fashion world. Emma Chamberlain hosted the Teen Vogue event at the New York Fashion Week that was held in September 2019.

In March 2019, she attended the Paris Fashion Week for Louis Vuitton and she was paired with fellow YouTuber Karlie Kloss at the event. She also collaborated with Calvin Klein for various shoots and videos. In February 2020, Emma Chamberlain was featured in Cosmopolitan with the tagline ‘ the most famous girl in the world’.

Shortly after her feature in Cosmopolitan, she appeared in the Italian version of the magazine and also in the Dutch version. In 2021, she attended the Met Gala as a host and she wore an outfit by Louis Vuitton to represent the brand.

Currently, Emma Chamberlain is a YouTuber, Instagram personality, and business woman. She also has hosted many fashion events and has walked the runway for many brands.

Emma Chamberlain started her podcast on April 11, 2019, and the first episode was titled ‘Anything Goes Wrong’. The podcast is produced is Ramble official and in the podcast, Chamberlain talks about an issue or topic in every episode.

Along with being a YouTube star who mainly vlogged about fashion and travel diaries, Chamberlain also talked about many public issues such as mental health, eating disorder, body shaming, and more. Presently, Emma Chamberlain has 11.8 million subscribers on YouTube and 16.1 million followers on Instagram.

Emma Chamberlain is dating American singer Tucker Pillsbury who is known for his stage name ‘Role Model’. Emma had been very private about her relationship with Pillsbury and the two made their relationship only in 2022 when they appeared together at the Vanity Fair Oscar Party.

Throughout her career as an internet personality, Emma Chamberlain won many awards. In the 2018 Steamy Awards, she won the award of the breakout creator and in the same awards, she was also nominated for first person and creator of the year category.

In that year, she was nominated for 5 Stream Awards and won two of them, which are the First Person Award and the Creator Product award. In 2020, Emma Chamberlain also won the award of People Choice Social Star of 2020 and Pop Podcast of 2020.

The YouTube star is living a luxurious life right now and seems that she is enjoying every moment that she missed out on in her teen years because of her parent’s financial problems. Emma Chamberlain is presently living in San Mateo, California in a 5,400 sqft luxurious house.

Her list of assets includes 6 real estate properties and she also has many cars including the Porsche Macan and Tesla Model X. She also has an invested stock value of $8 million which includes ventures like Netflix, Mastercard, and Apple.

Emma Chamberlain has multiple sources of income and this includes her YouTube channel, Instagram account, brand promotion, her business venture, and more. Chamberlain’s monthly income is $430,000 and her yearly income is around $120,000 to $200,000.

Emma Chamberlain stands at a height of 5 ft 4 inches and weighs about 114 lb. The YouTube star has blue eyes and blond hair.

People who actually watched the Met Gala for the outfit were more interested to talk about Chamberlain’s interaction with rapper Jack Harlow than anything else. In a video of her interviewing Jack Harlow, the singer leaves the interview saying love you to the camera and to which Chamberlain responds love you.

After that moment, we can see Chamberlain’s embarrassed face, and soon this video became a meme. Many content creators recreated this scene and it became an Instagram trend.

Presently people are talking about Emma Chamberlain on social media and this time, it isn’t about an embarrassing interaction. A few days back, Architectural Digest featured Emma Chamberlain’s home in Los Angeles.