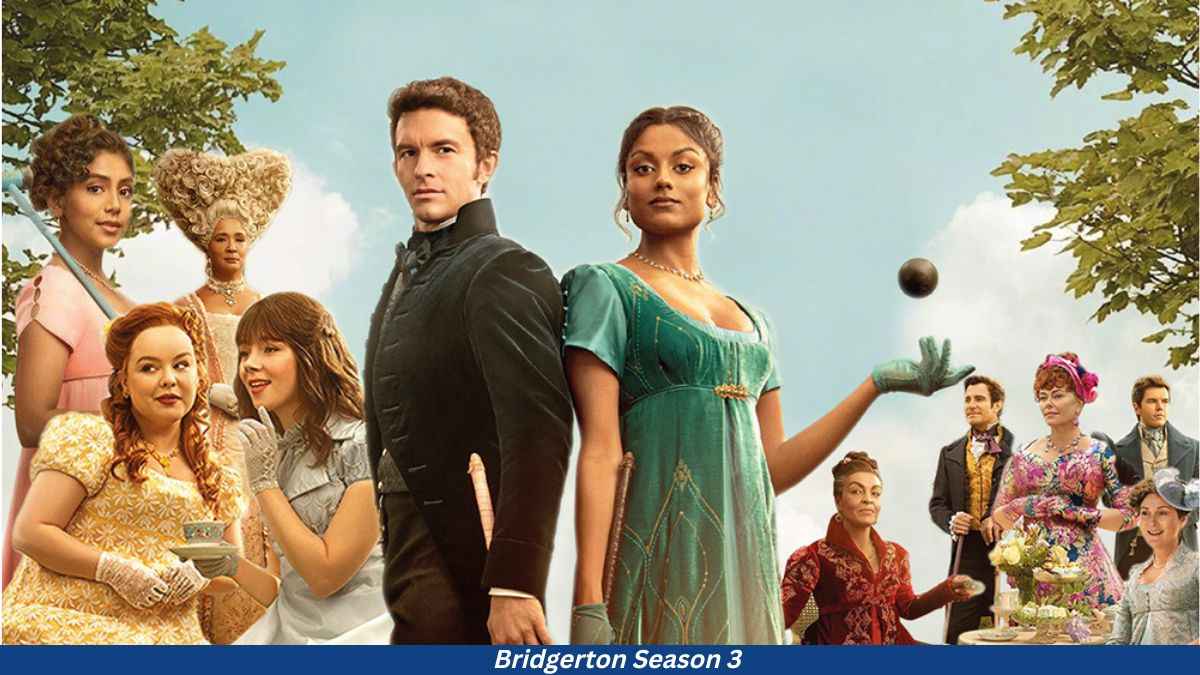 The historical-romance television show Bridgerton is based on the novels of Julia Quinn. This is Shondaland’s debut original production for Netflix, and it was made by Chris Van Dusen. Probable that the creative department will move quickly to prepare for Bridgerton season 3. If so, the release of the following part might happen in the springtime of 2023.

It centers on the titular Bridgerton household and is set during the annual season, when young and attractive youth of royalty and gentry are thrust into court, amid the world of competition of Regency-era England’s tonne.

When Will Bridgerton Season 3 Come Out?

The first season premiered on December 25, 2020, and got mostly favorable reviews with 625.49 million hours seen, it quickly overtook its next season to become the most-viewed English-language Netflix show.

The second season of Bridgerton launched on March 25, 2022, to relatively excellent reviews and was released at the top of the network charts in 92 different countries. According to Nielsen Media Research, it also served as the series with the most viewership for 3 weeks on American television.

What Will Bridgerton Season 3 Be About?

Bridgerton’s second season broke all viewing records and overtook season one in terms of audience size. And the entire series gives the romantic category its own cinematic universe while putting the feminine perspective front and center.

The program started pre-producing a second season before the first one began airing, and it was formally confirmed in January 2021 the television show also received a third and fourth season confirmation by April 2021.

The Julia Quinn novels’ timetable was followed by the initial two seasons of the series, but Netflix has announced that while they intend to adapt all of the writings into the tv series, Bridgerton Season 3 will be out of chronological sequence.

Season 3 will proceed directly to the fourth novel, Romancing Mister Bridgerton, which concentrates on Penelope and Colin’s plot, and bypass the third novel, An Offer from a Gentleman, which describes Benedict’s pursuit of love (It is not known whether the makers completely skip Benedict’s part or will portray it in further seasons).

The next season will be released at some point, however, the only information available so far is that it will indeed be released soon and is already in development.

Bridgerton Season 2 debuted a little more than a year after the debut season, however considering that the epidemic hindered production, it’s probable that the creative department will move quickly to prepare for Bridgerton season 3. If so, the release of the following part might happen in the springtime of 2023.

The Netflix original series Bridgerton, adapted from a collection of eight novels by Julia Quinn, chronicles the Bridgerton family, which includes widowed mother Violet (Ruth Gemmell) and her eight children, as all look for potential mates amid Regency England’s elite society.

The first season featured the Duke of Hastings’ dashing Simon Basset’s (Regé-Jean Page) courtship of the eldest daughter Daphne (Phoebe Dynevor), who was also searching for a marriage. After that, Season 2 explored the second novel in the franchise, focusing on eldest son Anthony (Jonathan Bailey) and the reckless Kate Sharma’s enemies-to-lovers affair.

And now the upcoming Bridgerton season 3 will revolve around the story of Penelope and Colin who were the supporting but important cast of the initial two seasons.

Where To Watch Bridgerton Season 3?

The show Bridgerton was the debut project of Shondaland and is on the list of Netflix’s Original series, which is why it can only be viewed on the Netflix platform only.

Will The Whole Cast Return?

Anyone could enter or exit, but we suspect that the majority of individuals of Bridgerton have agreements requiring them to stay. It’s difficult to conceive that figures like the Featheringtons, Queen Charlotte, Lady Danbury, or the Bridgertons would leave the program.

And if we talk about actor Regé-Jean Page, who portrayed the smoldering Duke of Hastings in Season 1, will be back? The answer is no he won’t be back for Bridgerton Season 3, despite all the rumors, the actor left the show for good. Now, will Anthony and Kate, the season 2 protagonists, likewise vanish like Simon Basset? Fear not, as they will definitely return but it appears that Anthony and Kate may become supporting figures as there is a compelling argument for them to remain in the story.

As Penelope Featherington, Nicola Coughlan will undoubtedly reappear, and so will her longtime love interest Colin, former Friend Eloise, as well as other Bridgerton household members.

But the actor playing Francesca has been changed, though as Ruby Stokes will no longer play the Bridgerton sister because she has switched on to feature in Netflix’s new series, Lockwood & Co and now Hannah Dodd will take her place.

Now the new question arises which is Will there be any recent arrivals? The answer is positive as three additional gentlemen, played by James Phoon as Harry Dankworth, Sam Phillips as Lord Dealing, and Daniel Francis portrays Marcus Anderson, are joining the nobility. There are a lot of suitors in Penelope’s future, it seems.

The Talk On Social Media About Bridgerton Season 3

The audiences very much liked the first and second seasons of the Bridgerton and the positive ratings is the proof of that. Not only did the series get so famous, but the book was also read by millions of people because they couldn’t stop themselves from searching for spoilers.

And yesterday only, season 2 completed its 6 months, and for that, the social media platforms got buzzed with so many tweets using #Bridgerton where they show their excitement for the upcoming season and their love for season 2.

What To Expect From Bridgerton Season 3?

After seeing Colin Bridgerton criticize Penelope Featherington last season, she has finally abandoned her long-standing affection for him, according to Bridgerton Season 3. However, she has decided that it is now time to get married, ideally to a gentleman who will give her enough freedom to continue living a dual identity as Lady Whistledown.

Colin, meantime, has resurfaced from his summertime travels with a fresh appearance and a serious air of confidence. But he is very disappointed to know that Penelope who was the only person who has ever fully accepted him for who he is, is completely ignoring him.

Colin offers to teach Penelope confidence-building techniques in an attempt to gain back her friendship this season. But as time pass, Colin starts falling in love with Penelope and their friendship slowly and slowly starts to change.

Any Episode Guide For Bridgerton Season 3?

The episode guide of season 3 of Bridgerton is not yet revealed but it is estimated that this upcoming season will also have 8 episodes just like the prior seasons and a running time of 60 to 70 minutes.

Is There Trailers For Bridgerton Season 3?

The trailer of the upcoming Bridgerton season 3 is not yet released as the show is still in production or post-production period.