Joey Defrancesco, the munificent Jazz Organist, saxophonist, and trumpeter of America died on...
Homecelebrity10 Most Beautiful... 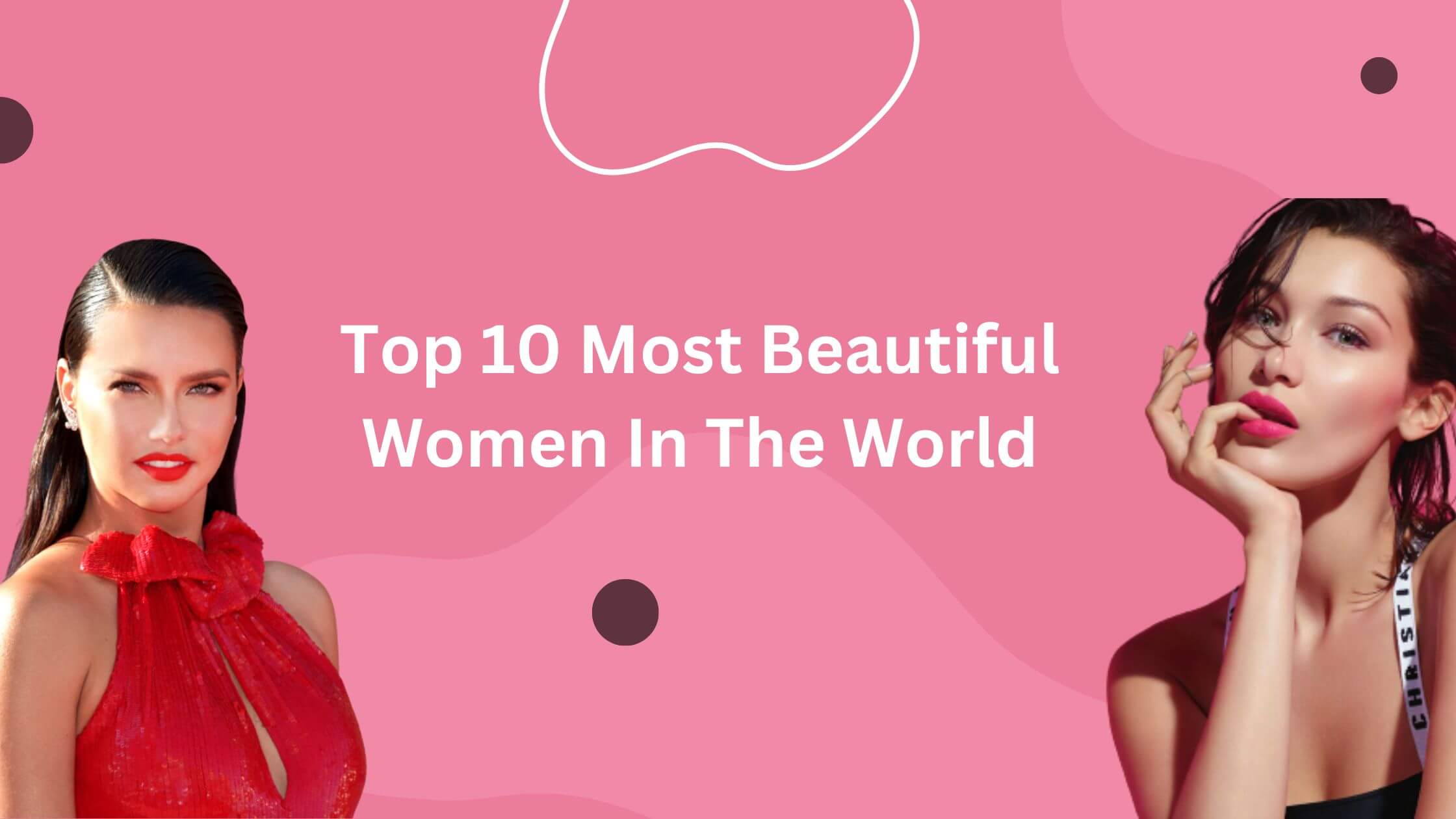 Based on the “Golden Ratio of Beauty Phi” report Bella Hadid comes the First number in the list of Most Beautiful Women In The World. Charming beauty is what people all over the world admire to the extreme. Alluring beauty can inspire people to extreme levels.

No one in the world would be not interested in enjoying and admiring the beauty around the world. If you are a beauty enthusiast and would like to Know about the most beautiful women in the world, you have come to the correct place.

Who Is The Most Beautiful Woman In The World?

The untrammeled enthusiasm to indulge ourselves in things that give pleasure to the mind and to our eyes is the most preferable activity. The most prominent thing that gives pleasure and will please the Most Beautiful Women beauty of our celebrities.

If you stan those beautiful figures, here is the list of Top 10 Most Beautiful Women in the World selected for 2022.

Bella Hadid comes the First number in the list of Most Beautiful Women In The World. She was regarded as a spectacular attractive woman based on the “Golden Ratio of Beauty Phi” report.

The renowned cosmetic Surgeon Julian De Silva accentuates that Bella is the number one beautiful Women of all time that truly has the right to hold the crown. Julian also listed the calculated measurements which are apt for the face features.

Isabella Khairiah Hadid is an amazing American model born on October 6, 1996. She commenced her model career when she was 16 years old. She hails from a modeling family. Her mother Yolanda Hadid was also a model, a Dutch lady with mesmerizing talents. Her father was into real estate, of Palestinian Jordanian descent. Her siblings, Gigi and Anwar also are from the modeling world.

The next person who is the owner of exquisite glamour In The World is Adriana Lima. She is an amazingly beautiful and talented Brazilian Model, born on 12 June 1981. She is now at her golden 41 years of age. She is popularly known for her work as a Victoria’s Secret Angel most gorgeous woman on the planet.

Maybelline is one of the trending brands across the globe and she was also profoundly known as a spokesmodel for Maybelline cosmetics. Dark hair with her alluring blue eyes would suffice the world.

Beyonce is the most outrageously leading singer-songwriter of the R&B group. She is the third lady who has taken the seat in the category of the most beautiful women in the world. Her debut album which paved the way for tremendous growth in her career was ‘ Dangerously in Love.

Beyonce Giselle Knowles also known by other miscellaneous names like, Queen, Sasha Fierce, Third Ward Trill and Harmonies by the Hive was born on September 4, 1981. Beyonce is now at the age of 40 with an astounding career. She is profoundly known as one of the World’s Best-selling recording artists.

Margot Elise Robbie is the fourth one, who is known for her stupendous acting. She is a bewitching personality with gorgeous beauty. Robbie is an Australian Actress and also a producer born on July 2, 1990. In 2019, Robbie was ranked as the most beautiful and world’s highest-paid actress by Forbes 2019.

Robbie, born in Queensland, stepped into the world on the television series named ‘Neighbours’.  The film ‘Wolf of the Wall Street’, sharing screen space with Leonardo Di Caprio was a breakthrough in her career.  She also had done a biopic and she received critical acclaim and nominations for Academy Awards for Best Actress for her mind blogging portrayal.

Without much deliberation, Aishwarya Rai Bachan is an attractive and beautiful woman, With her larynx eyes, she just swooped into the world.

Aishwarya Rai was born on November 1 1973 into the Bunt family and her net worth is estimated at 870 crores, $110 Million.  Proudly everyone can assert that she is the most beautiful woman in the world and she has won the crown, Miss World of 1994.

Aishwarya Rai had many accolades and she is one among the Indian actresses who is the recipient of Padma Shri Award for her irrefutable contribution to Indian Cinema. Other than this great honor Rai has received Two FilmFare Awards for Best Actress. Also, she has fetched the title, a Filmfare Award for Best Supporting Actress.

Angel Baby is the next sixth member who is responsible for her charming enthusiastic beauty around the world. Angela Yeung Wing was born on February 28, 1989. She is popularly known by her stage name in the industry, Angel baby. Her net worth is estimated at $50 Million.

As her name likely indicates, she was born in Shanghai, China. Her father was a Hong Kong and her mother a Shanghainese, she was a hybrid baby of German and Chinese descent. Yang Ying was her birth name and later she changed it.

At the age of fourteen Baby decided to set out to the world and signed a modeling contract. Her father used to have a fashion Business and she once said that “Even though he sells more mature clothes, I loved going to his store and trying on new outfits and mixing and matching them. It was fun. I think that’s how I developed a passion for fashion.

Ariana Grande-Butera, an astounding American singer, songwriter, and beautiful actress was born in Florida on June 26, 1993. Her parents and her half-brother were her pillars of strength. At the age of thirteen, she seriously began to pursue her career. Her passion was to be an amazing singer and she always craved to record an R&B album.

Her Nickelodeon show ‘Victorious’ was another breakthrough in her career and she gradually with her amazing voice stepped into success. She was always into pursuing her music career and acting was not something she desired.

Her ‘Put Your Hearts Up’ single recording in December 2011 was her another shot. Her debut studio album ‘Yours Truly’, originally titled as ‘Daydreamin’ became number one on the US Billboard 200. Her duet songs with Nathan Sykes also hit and these recordings helped her to carve out her own space in the musical field.

Gal Gadot-Varsano is the eighth member group of Top 10 Most Beautiful Women In The World, Who an Israel Actress and model. She was born on April 30, 1985 in Petah Tikva, Israel.

An astounding figure, she was crowned Miss Israel in 2004 when she was only eighteen years old. Also one of her major fields was, she served in the Israel Defense Forces as a Combat fitness instructor for two years. In 2020, Gadot was ranked as the irrefutable third-highest paid actress in the world. Her annual earnings are estimated at $ 31.5Million.

Other than this, Gadot has been a model for umpteen international campaigns like ‘Miss Sixty, Huawei smartphones, Captain Morgan rum, Gucci Fragrances.

The most beautiful compelling and effervescent personality of Indian cinema, Deepika Padukone has owned the ninth position in the world for her charming beauty. Deepika and her effulgent smile and her cute dimples make her the prettiest girl world. One of the highest-paid actresses in India, Deepika was born on January 5, 1986. Her net worth is estimated at $14 Million.

She was born into a badminton family of legacy. Her father was a badminton player named Prakash Padukone and her mother was Ujjala, a travel agent. Her grandfather was in Mysore as the secretary of the Badminton Association. Her sister, Anisha, was a golfer.

Because of her charming beauty, her modeling career paved the way into another world and she made her debut by acting as the titular protagonist of the Kannada film ‘Aishwarya’ in 2006.

Another American beauty, actress, Scarlett Ingrid Johansson is the number tenth position on the list of top beautiful women in the world. Scarlett, the epitome of gleeful personality was born on November 22, 1984, in New York City.

Scarlett was born to an American mother, and to a Danish father. Her family has a presence in the entertainment industry. Her sister, Vanessa is also an actress too. She attended elementary school and at the age of thirteen, her parents were divorced. Her net worth is calculated at $1.2 Billion.