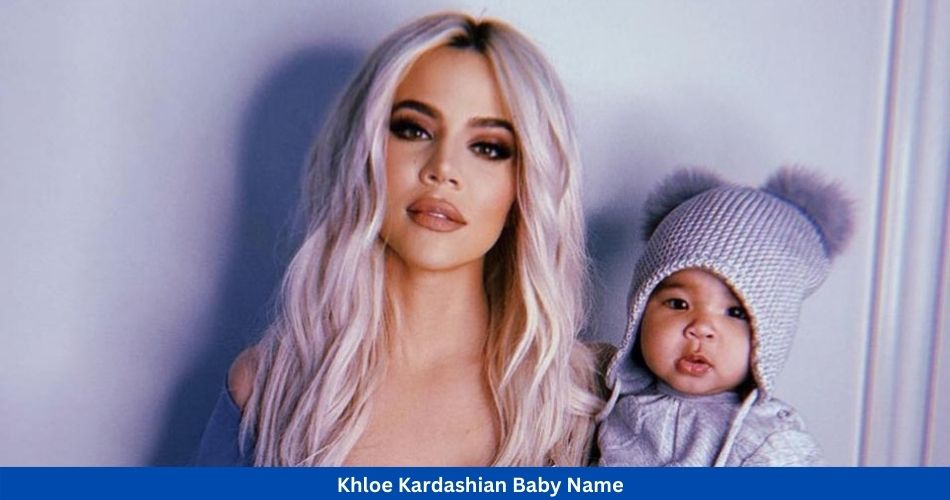 Khloe Kardashian nearly spilled the beans in The Kardashians premiere on Thursday.

Miss Kardashian was yet to reveal the concealed name of the 1-month-old baby boy, but shared a major hint, live, when she said, “its gonna begin with a T”.

Her next line was, “Those were the only names I ever checked.”

What is Khloe Kardashian Baby Name?

From her statement, it is crystal clear that she must have her third trimester wandering among literally, every Ts. The kardashian matriarch then joked about simply naming the baby as “Travis”, that way they could have had three Travis altogether- implying Kylie Jenner’s boyfriend, Travis Scott and Kourtney Kardashian’s beau, Travis Barker.

Kris, who was extremely happy with the revelation, screamed in laughter at both Travis identities and even added names like Thandy and Terrace to the list. Moreover, she headed to Google to find more names that would possibly suit Khloe’s “T” condition.

In the pilot episode, the Kardashians celebrated the baby shower of Khloe, where the momager encourages to spill out name suggestions for the little one’s moniker.

Suddenly, Corey Gamble, Kris’ boyfriend came up with an exclusive name as Ten, which Kim agreed and addressed that it was quite cool. Kris, for her part, pitched Tiger as the middle name.

The list was eternal from Triton to Tupac, and to Tio and Tide. Kourtney, Malika Haqq and Kim recommended these cute names, all trying to hold back their excitement.

Khloe, who was pregnant at the time, did neither ditch nor confirm any of the suggested names. On July 28, she welcomed her son via surrogacy. His birth was documented towards the closure of the episode. While holding her baby boy for the first time, Khloe felt so grateful to consider him as the best gift she could ever have. Khloe was however, the centre of controversy for a period of time.

Baby was literally the key to her healing as she was shattered from the trauma of Triston Thompson, who turned out to cheat her, fathering another child with another woman, which was found right after the surrogate confirmed her pregnancy news.

In a confessional session, Khloe recalled her mental condition when things turned out grey. She said, “It was as if those dark clouds were looming every day over me.  I was depressed and sad, but now I’m trying to enjoy my expanding family.”

While the mother-son was returning back home, she was stopped by the co-creator of Good American, who smiled at her newborn calling him “No Name Johnson ”. This is her second child, for Chloe is previously mother to True Thompson, who has turned 4 recently.

Her birthday was in April, however they had to celebrate it with a heavy heart as it was days after Thompson’s news broke among the family.

At the delivery room, the former couple were together as Thompson was not denied entry. Khloe did so and so because she knew that the moment was never going to return.

Apart from her break break story, Khloe’s weight loss journey was also well accepted by her critics as they claimed she was using potentially harmful products for fast weight-loss.

It’s not a deal as we know Kardashians have undergone several surgeries. Recently, Khloe was trolled for her nose job, which has brought tremendous change in her overall face. Of course, the tycoon avidly denied being under the knife, but alleged that it was all the magical result of her high-end make-up products and cleverly applied makeup techniques.

Surrounding her cosmetic enhancement, she has been stubborn about claiming those were only a part of their lifestyle changes and predictably, her massive followers in Instagram are admirers of the mogul, who impresses them with glamorous photoshoots, uploading every now and then. Khloe, who is preferably more fond of selfies, has been garnering countless not-so-good comments on her profile recently. She is now constantly being accused of photoshopping

Must Read Who Is Kathleen Nimmo Lynch From Celtics? Facts On Ime Udoka Celtics Staff

On top of this, Khloe is often seen with suspiciously perfect skin, for which she is always commented on. Over the years, Khloe has also acquired the signature hour glass figure of Kardashians in its entirety. Well, her lips have visibly popped up, but she cannot overdo her sister, Kylie, who has turned her pout quite attractive, it is now a part of her cosmetic line’s branding.

Khloe and her newborn are gaining much more attention than Kylie and her 7-month-old son, Wolf. But, it seems that she has altered his name from Wolf in March.