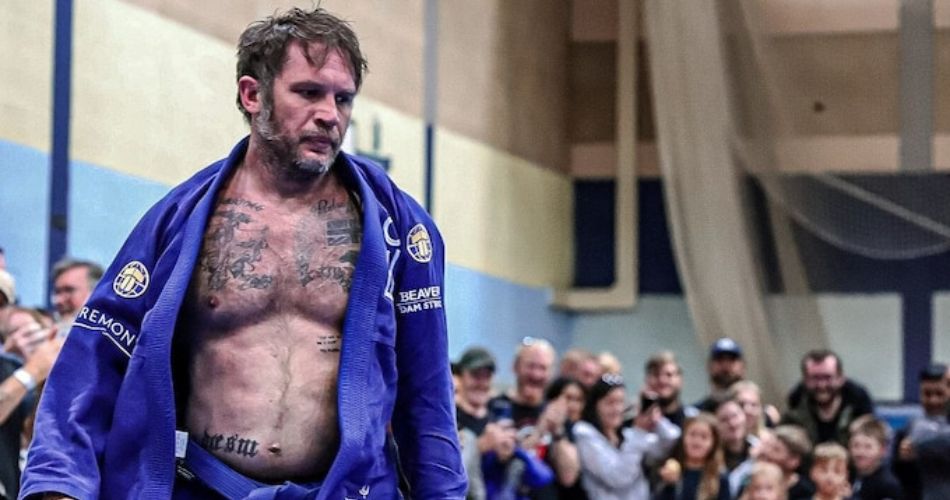 The Mad Max, Legend, and Venom star Tom Hardy, is more than a big screen star as he is also an action superhero beyond the camera.

Tom Hardy pulled off gold in the 2022 Brazilian Jiu-Jitsu Open in Milton Keynes, surprising their fellow attendees over the weekend. The unannounced entry of the Hollywood legend to compete in the 2022 Brazilian Open Championship merely gave goosebumps to the entire audience who were seen wooing and cheering until Hardy embedded himself as the outright winner of the match, held at Oak Grove School.

Needless to say, Hardy has been a Blue Belt in Jiu-Jitsu over the years. The blockbuster maker was praised by the spokesperson of the Ultimate Martial Arts Championships, saying he was a really nice guy.

The much-noticed trait of the Dark Knight Rises star was the humbleness he maintained throughout the public exposure, staying as meek as possible. Hardy was literally nice to his fans who were rushing to photograph with him. Although he was easily recognized by the mob, Hardy didn’t care about his celebrity status, not even once.

“It was a matter of pleasure that a public figure like him competed at our event”, said the spokesman.

Hardy, who is better known as Tom Hardy, entered the competition under his true name, Edward Hardy alongside his opponent Andy Leatherland, another blue belt, who was trying to have a match with the famed actor as his motive behind the participation was a one to one match with Hardy.

“I already knew that Hardy won 2 golds, fighting in the last competition, but I knew that if the matter was so, then I would definitely fit into this category- after all, we are almost the same ages, and also weigh the same”, said Leatherland.

“We used to say that if Hardy was to fight, then I would be the one to oppose, but I never thought anything of it”.

“I was pondering through the list of Milton Keynes tournaments when I suddenly came across teh name, Edward Hardy- I realized that Hardy actually signed in it”.

The 42-year-old conditioned a day before the tournament that he would only fight Hardy if it is either for the final or at least for the bronze level match.

He furthermore added, “ On the day of the tournament, Hardy won twice in a row, naturally ending up meeting him in the final. While lining up, he was utterly focused, as if he was about to play a character in its intensity. He didn’t say anything, it was quite a silence. But when he entered into the fight, you could not help yourself but thought that it was him, but then it eventually became a competition.”
In actuality, Brazilian Jiu-Jitsu happens to be a combat sport martial art in self-defence, which involves submission hold, grappling, and ground fighting. A person wins, when he forces the opponent to the ground, controlling him using joint locks or other major holds.

According to Leatherland, he made a mistake which was highly made use of by Hardy at the right time as he capitalized on that and subsequently nailed it, subbing him, all in a very quick move.

“He is a sound person”, said Leatherland. The action star considered martial arts to be nerve-wracking, he revealed after a quick, friendly chat with Hardy, after the fight.

Must Read Tiffany Haddish Net Worth 2022- She Is A MILLIONAIRE!!

This is certainly not the first time Hardy is shown up without notice, as he appeared at the charity REORG Open Jiu Jitsu tournament in Wolverhampton, shortly ago, to raise funds for the military personnel who are dealing with physical as well as mental ailments.

During that match, it evoked a similar kind of excitement among the audience, who clapped for the impressive armbar gold winner.

“I didn’t know that Tom would be the player who will play with me at the semi, I was only waiting much-side. But when he showed up, everyone expected me to remain composed.” said the then opponent of Hardy.

He then added, “I took no time to recognize who was before me, well, who does know Tom Hardy? I was shocked as hell.”

“Forget this is me, and do what you normally used to do over a fight”, Hardy told him prior to the match.

“I think Tom is much stronger than I anticipated, it doesn’t feel like you’re fighting a celebrity”- the opponent elucidated.

No wonder Hardy turned out to defeat the professionals as he himself had acquired the necessary moves of martial arts back in 2011, while he was filming for “Warrior”. The movie literally turned him into a fighter in reality.