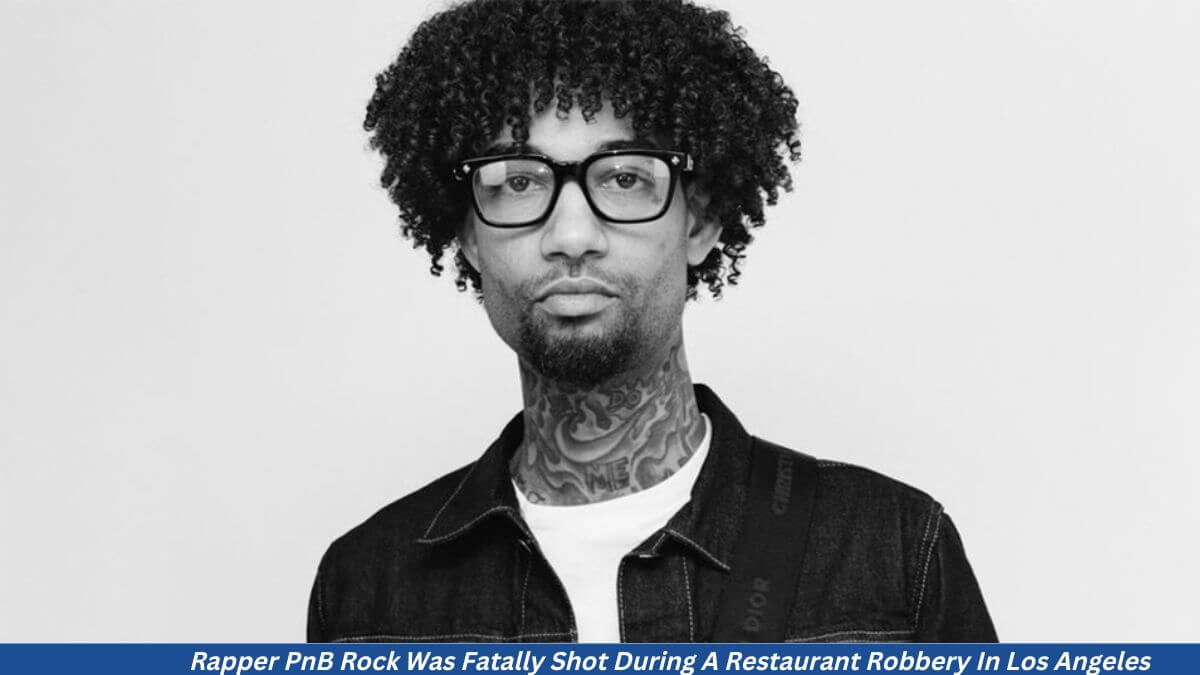 PnB Rock an amazing rapper who regaled his fans across the globe with his shrilling voice was fatally shot by an anonymous person who was waving his gun and intended to rob him. His stage name popularly known as Rakeem Allen ‘PnB Rock’ was a resounding American rapper and singer born on December 9, 1991, in Philadelphia, Pennsylvania.

His stage is a reference to the street corner where he grew up, Pastorius and Baynton. When we hear the name PnB Rock, the most prominent songs that come to everyone’s mind would be ‘Fleek’ and ‘Selfish’. These songs were his most renowned and highly acclaimed ones in his life and ‘Selfish’ peaked at number 51 on the US Billboard Hot 100.

According to reports, PnB Rock was spending a romantic time with his girlfriend at the Roscoe’s Chicken and Waffle restaurant.

It was a clear case of homicide by shooting that shook the world. The culprit robbed PnB Rock and he was in pursuit of attaining his jewellery.

ILaw enforcement reached the spot when they received the call at 1.23p.m but before they could do anything the culprit had done what he desired and he absconded. The CCTV footage which is circulating widely throughout online depicted the soul crushing scene where PnB Rock is fighting for his life.

The culprit was waiting for a golden chance to brandish his firearm so that he could demand his property. Victim and his close friend, the main witness, were sitting at the restaurant and engaged in some sort of conversation.

Must Read: ‘Sister Wives’ Christine And Kody Brown Split After 25 Years Of Marriage

Out of the blue, everything happened within a blink of an eye and people only heard the sound of gunshots. Multiple rounds of gunshot and he got PnB’s property to some extent, but the complete list has not been yet given.

Los Angeles police Captain Kelly Muniz gave a brief description of the incidents that happened and he also added that the suspect ran away from the spot within seconds after being shot and he fled the parking lot in a car. No one else in that restaurant has been injured or assaulted, so we could infer that PnB Rock was the only target of the suspect.

PnB Rock inadvertently left his two children and left the world at 1.59 in the hospital. His Girlfriend and the mother of his child Stephanie Sibounheuang prior to this brutal incident had posted a picture of the place they were eating and she even tagged the location and later it was deleted.

PnB the outrageous Hip hop, R&B, trap, and pop singer died on September 12, and this news has left the world in deep sorrow. His songs and his outstanding contribution was something worth mentioning.

Rakim Hasheem Allen was born in the outskirts of Germantown. He was a single parent child because his father was murdered when he was too naive at the age of three and his mother was the primarily guardian that fate had left.

PnB Rock had a net worth estimated at $3Million at the time of his death. His death has devastated the lovers of his works and the what would be the motive behind this crime is totally unaware.

Why focus on PnB alone and is there any previous vengeance that was in the air is yet to be discovered. His two children and his close ones are weeping because of this uncanny predicament.

Spending his teenage years in Northeast Philadelphia, he always had his interest in music and he listened to rapper Tupac and R&B group Jodeci while growing up. But his childhood was not that simple and carefree.

PnB Rock was sent to the detention program for committing heinous deeds such as robberies at the small age of thirteen.

Other than this Allen was imprisoned for 33 months in prison for possessing drugs at the age of nineteen and these incidents totally affected his life and he was homeless for quite a period of time. His education was stagnant and he couldn’t even finish his high school.

The world around Allen was not completely ready to accept him because of his uneasy past crimes. The world surrounded him showed a red flag and later when he desperately showed his talents in singing and writing, gradually the atmosphere started to change and the world started acknowledging him.

After overcoming all the impediments Allen released his debut mixtape the main feature of this is Allen is the writer of this mixtape and he got the concept and idea when he was incarcerated.

‘Real N*gga Bangaz’ was his first attempt and later he made a deal with Atlantic Records and he released his other third mixtape named ‘RnB3’.

‘TrapStar Turnt PopStar’ was his debut album and this helped him grow further in his career. He got opportunities to release his other musical endeavours mainly ‘GTTM: Goin Thru the Motions’ and surprisingly this was on number 28 on the US Billboard 200.

Other than this he released title tracks featuring two astounding rappers like Pop Smoke and King Von and the former track was named as ‘Ordinary’ and the latter was ‘Rose Gold’.

American Comedian David A. Arnold Passed Away At 54!