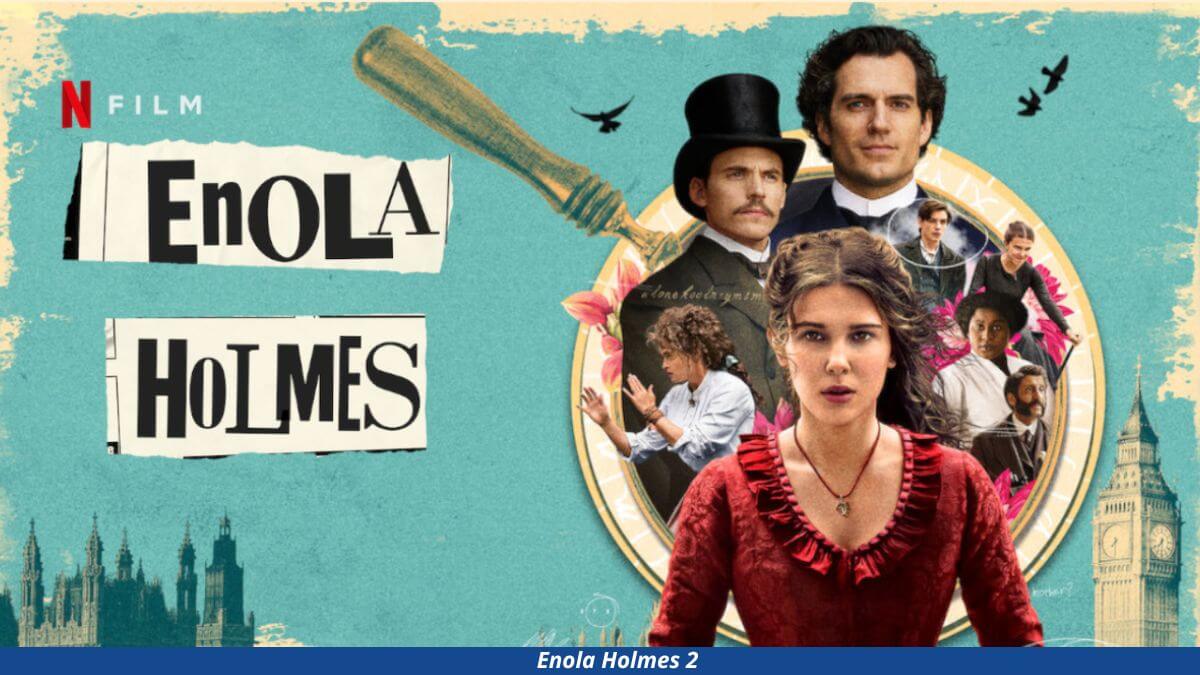 Enola Holmes is an American film based on the fiction series of the name “Enola Holmes” by Nancy Springer, the movie explores the themes of drama and mystery. Enola Holmes 2 Release date is 4th November 2022. The sequel will be premiering on the online streaming service Netflix.

Legendary Pictures and PCMA Productions are the production companies involved with Netflix as the distributing platform. Harry Bradbeer is the director of the film with Mary Parent, Alex Garcia, Ali Mendes, Millie Bobby Brown, and Paige Brown being the producers.

Will There Be A Enola Holmes 2?

Then, in May 2021 the project for the sequel was officially confirmed by Netflix. Later, the movie’s production and filming began in Autumn 2021. Henry Cavill finished filming for his part in November 2021. Whereas the overall filming concluded on January 7, 2022.

Enola Holmes 2 Release date is 4th November 2022. The sequel will be premiering on the online streaming service Netflix. The movie is expected to have an average run the length of about one hour thirty minutes to one hour forty minutes.

No information has yet surfaced by the makers of the film regarding its release on any other streaming platform apart from Netflix, it is also not confirmed whether the movie will be having a theatrical release or not.

Must Read: The Witcher Season 3 Expected Release Date And Latest Update About The Upcoming Netflix Series!!

Since part one was released during the COVID-19 pandemic, it was only released on Netflix but looking at the popularity that it gained back then, it is expected to have a theatrical release as well now for the upcoming sequel.

Enola Holmes 2 plot will be revolving around the movie’s main character Enola Holmes (played by Millie Bobby Brown), she will be seen starting her career as a detective by opening her own agency and becoming the female detective to hire. She will be seen dealing with adult dramas and high-class cases this time.

Thus, taking up on her first ever assigned case given by a penniless matchstick girl. Her new mission will prove to be more dangerous than what she dealt with the last time. Finding herself stuck amidst a deadly conspiracy, Enola will resort to help from her friends and brother, the all-time famous detective Sherlock Holmes himself.

Where To Watch Enola Holmes 2?

Enola Holmes 2 will be available to stream on the online streaming platform Netflix. It is not yet confirmed whether the sequel will also be having a theatrical release. There is no information on whether the movie will also be released on other online streaming platforms or not, since Netflix is its original distributor, it is only expected to be released on Netflix.

The audience can also stream part one of Enola Holmes on Netflix. Part one was released on 23rd September 2020.

There is no information yet whether Sam Claflin will be coming back as Mycroft Holmes. Apart from this Louis Partridge will be returning as Tewkesbury along with Helena Bonham Carter as Eudoria Holmes, Adeel Akhtar as Lestrade and Susan Wokoma as Edith, respectively.

The other additional cast members are Sharon Duncan-Brewster, David Thewlis, Gabriel Tierney, Hannah Dodd, Abbie Hern, and Serranna Su-Ling Bliss. As of now no information has been provided about what role these actors will be playing in the upcoming sequel.

David Thewlis will be seen playing the role of a shady police officer and Duncan-Brewster will be playing a mysterious character which will soon be unveiled by the makers of the movie.

The Talk On Social Media About Enola Holmes 2

Enola Holmes 2 spoilers have not yet surfaced on the internet, but what is confirmed is that Enola’s potential love interest Tewkesbury (played by Louis Partridge) will be returning for the sequel and fans might expect some hints of the blooming love between the two in the sequel.

Fans are also wondering whether Sam Claflin will be coming back as Mycroft Holmes or not. No information has been provided by the makers or the actor himself about his return.

What To Expect From Enola Holmes 2?

The upcoming movie Enola Holmes 2 will be full of new mysteries, drama, and suspense. The audience can expect their little detective, Enola Holmes, to have bettered the art of solving mysteries.

Coming from the family of the incredible Sherlock Holmes, Enola will be using her high skills to unravel the new mysteries case of a missing girl who used to work in a match factory in London. The story will be set in London, this time. Enola will be on her new adventure trying to locate the missing girl.

While solving her new mystery she will eventually get caught up in high stakes chase across London. Thus, navigating her way through the city lights and the chaotic industrial grounds with the involvement of the sinister factories all the way to the glamourous world of high-class societies. She is going to get tangled up in the rising conspiracies.

In the upcoming sequel, Helena Bohem Carter will be having an increased role as compared to part one, she will be reprising her as Eurodis Holmes (Enola Holme’s mother).

Any Episode Guide For Enola Holmes 2?

There is no episode guide for Enola Holmes 2 because it is not a series but a movie. The sequel of the movie will be available to stream on the online streaming platform on 4th November 2022.

It is expected to have an average run the length of about one hour twenty minutes to one hour forty minutes. It will primarily be available to stream in the English language. However, Netflix will also be releasing a few dubbed language versions as well.

Is There Trailer For Enola Holmes 2?

Enola Holmes 2 trailer has not yet been released. It is expected to be released soon by Netflix.