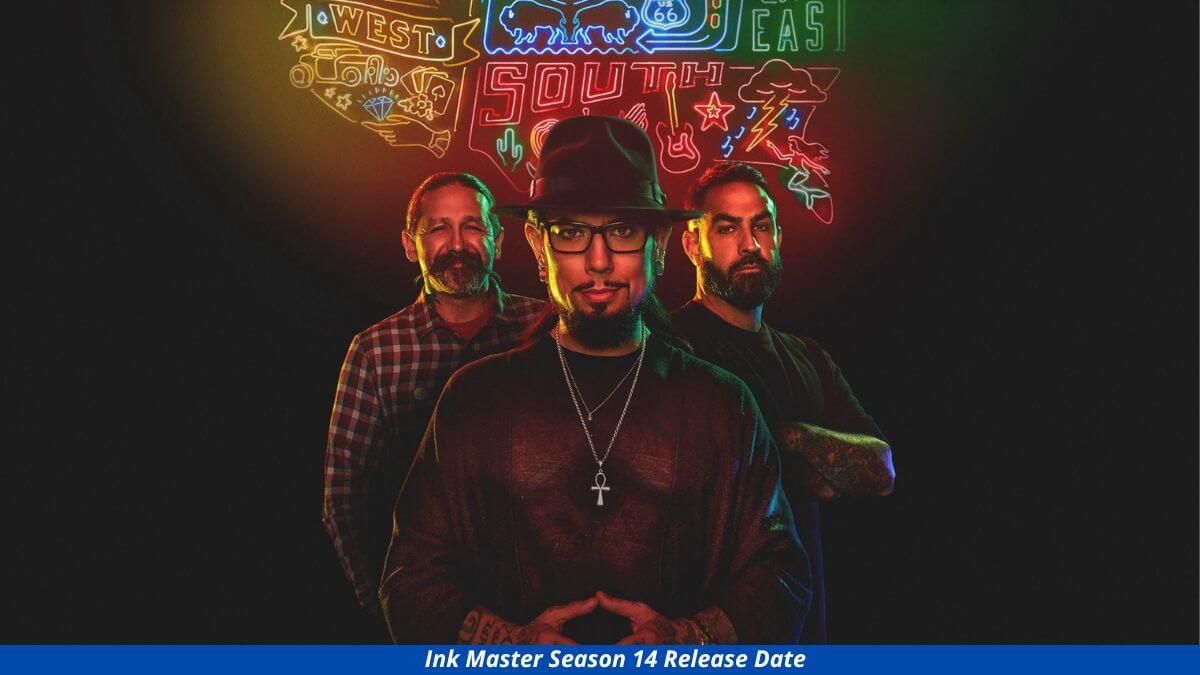 Ink Master has been an audience favorite since the time it has been released. This reality television competition involves a battle between passionate tattoo artists who compete for the title of Ink Master and a significant amount of prize money by showing their tattoo art skills. Unfortunately, the series was canceled in the year 2020 due to some reason but early in the year 2021, it was announced that Paramount Plus was going to revive the show.

Ink Master season 14 release date was announced a while back and the show is going to return to the famous streaming platform Paramount Plus soon.

The show has originally been judged by Dave Navarro and famous tattoo artists Chris Nunez and Oliver Peck. Ink Master season 14 is going to have a new host and new judges with some old as well. Further in this article, we will get to know more about the Ink Master season 14 cast, episodes, spoilers, and more.

Ink Master has had 13 successful seasons and the new season is going to be released soon. The show was first released in the year 2012 and since then has given the audience theme-based seasons full of entertainment. The production company of the show is Truly Original and the initial seasons were released on the Paramount Network.

The episodes of all the seasons have followed a similar format and the finales have unique distinctive challenges. The Ink Master season 14 plot hasn’t been revealed yet but we can expect the reality show to have a similar format as its predecessors.

Dave Navarro has entertained the audience as a host and judge for several seasons but in this upcoming season, Joel Madden is going to be the host of the show. The Ink Master season 14 release date was announced a while back and the show is going to be available to watch on Paramount Plus on September 7, 2022.

As mentioned earlier, the Ink Master season 14 release date has been officially announced a while back. The reality show is all set to premiere on September 7, 2022, on Paramount Plus. The show is returning after a significant break and will have some new judges and a different host this time.

The basic format of the show will most likely not be changed and this new season too will include the Flash Challenge which involves tattooing but will be judged on a skill that is non-related, for example, painting, burning, giving a haircut, etc. The winner of this challenge will get certain privileges. The Flash challenge will be followed by the elimination challenge which will test the contestant’s artistic skills on a human canvas.

The contestants are allotted their human canvas and are given time to go about their next step. After all of this, they will be judged on their skills, and a player is eliminated towards the end of every episode until the finale which has unique distinctive challenges, and the winner this time will take the most amount of prize money ever announced after all its seasons and that is going to be an amount of 250,000 dollars and the Ink Master winner title.

Ryan Ashley, who was the winner of the previous season is going to be a judge in this new season. Nikki Hurtado and Ami James are also going to be present in Ink Master season 14. The list of the contestants that are going to take part in the reality competition is given below:

• Chris Shockley, who was a part of season 11

• Creepy Jason, who has been a part of season 12

• Gian Karle, who was a part of season 8

The Talk On Social Media About Ink Master Season 14

Since Ink Master season 14 streaming has been announced, the avid watchers are eagerly waiting and have expressed their related thoughts on social media platforms. The reality television competition has an official page on Twitter with the handle “@inkmaster” and an official page on Instagram with the handle “inkmaster” which keeps the audience updated with news related to the show.

Fans have expressed that they are happy to see the return of some of the contestants from the previous seasons and have especially appreciated the hosting quality of Dave Navarro and that the show is not going to be the same without him as the host. Despite the changes, the audiences are still excited to see what this new season is going to bring to the table.

What To Expect From Ink Master Season 14?

Since Ink Master has had 13 successful seasons which have received a lot of appreciation over the years it is only fair that we expect this new season to live up to the standards set by its predecessors. With a new host, we can expect the show to be presented a little differently but nonetheless, the essence of the reality competition will definitely be revied and we will get to see aspiring tattoo artists and their set of skills at work.

There will be new judges including guest judges and different challenges and themes in this new season. Since the prize money for the winner of this season has been increased, we can expect that the stakes of the competition are also going to be higher. The new changes and additions will be refreshing for the show and nonetheless, the audience can expect to be entertained by the competition.

The Ink Master season 14 episode guide has been released and this new season is going to have a total of 10 episodes. Every episode is going to be filled with new challenges, great artistic skills, and tons of entertainment. The audience will be able to watch this new season on September 7, 2022, on Paramount Plus.

The Ink Master season 14 trailer begins with the announcement of its return with a new host, Joel Madden who has actively followed the previous seasons. The contestants jokingly say that they are a bit more nervous now since there is a new host and also mention that they have been a fan of Joel Madden. It is then revealed that a lot of fan-favorite artists are returning for this new season.

The announcement of the prize money increasing for this season is also made and the talented judge panel is introduced. Later the contestants are seen working hard as they face the challenges given to them. A contestant can be heard saying that there is a higher reward as well as a higher risk.