Joey Defrancesco, the munificent Jazz Organist, saxophonist, and trumpeter of America died on...
HomeMoviesWeird: The Al... 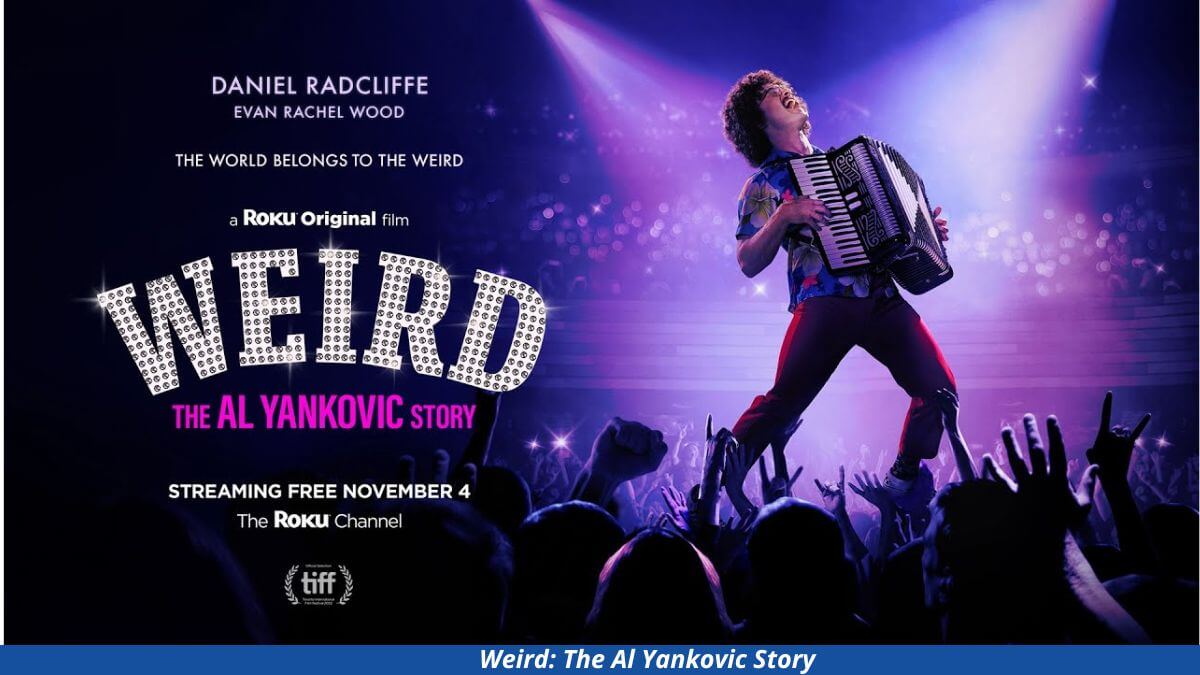 Roku’s ‘WEIRD: The Al Yankovic Story’ is the biopic of America’s foremost song parodist “Weird Al” Yankovic, the most celebrated comedy musician of all time. He is a “novelty artist” who makes parody-specific songs of popular music. He is a musician, singer, and actor and he is hugely known for his humorous songs. The newly released poster reveals the estimated late fall release date confirming the arrival of the biopic on the 4th of November 2022, on Roku’s channel.

Nearly 40 years later, after recording classic hit songs and parody music videos like “Eat It” (Michael Jackson’s “Beat It”) “Like a Surgeon” (Madonna’s ‘Like a Virgin’), “Smells Like Nirvana”, “Amish Paradise”, “White & Nerdy” (Chamillionaire and Krayzie Bone’s “Ridin’) and “Word Crimes”, he is still around.

After being nominated a total of 16 times, Yankovic has been the recipient of five Grammys and with a string of gold and platinum certifications in the U.S. if you want to know more about the biopic-like release date, cast, and plot- keep reading.

What Is ‘WEIRD: The Al Yankovic Story‘ Release Date

The first official teaser trailer for Weird: The Al Yankovic Story was released on 3rd May 2022, offering a better glimpse of Radcliffe (and his washboard abs) as Yankovic. The newly released poster reveals the estimated late fall release date confirming the arrival of the biopic on the 4th of November 2022, on Roku’s channel.

Radcliffe revealed that the filming of the whole movie was completed within just 18 days. He further added that he is very excited for people to see it and believes it’s going to be really really cool. ‘The shoot was unbelievably fast and I don’t know how we did it,’ he added, ‘but we did it and I think it’s going to be good.’

Harry potter’s Daniel Radcliffe will be starring in the biopic as Yankovic and he shared the news earlier this year by making a remark about wearing the ‘Hawaiian shirt’ and how it is a huge responsibility that he will not be taking lightly.

The biopic promises to hold nothing back and explore every dimension of his life, be it his childhood or his meteoric rise to fame with early hits like “Like a Surgeon,” and “Eat It,” while exploring the truths of his torrid celebrity love affairs and famously scandalous & depraved lifestyle.

The biopic WEIRD: The Al Yankovic Story will take the audience on a truly unbelievable journey through his life and career, exploring how from a gifted child prodigy he went on to become the greatest & most celebrated musical legend of all time.

What Is The Plot Of Weird: The Al Yankovic Story?

Yankovic, born on 23rd Oct 1959, was raised Christian and became famous after one of his songs- “Belvedere Cruising” was played on a southern California-based comedic DJ Demento’s radio show.

Interestingly, his mom banned him to listen to the show when he was 16. Yankovic received national attention in the ’80s for his parody songs. And since then, he has received a lot of praise and respect from artists like Lady Gaga and Michael Jackson.

Yankovic released a spoof of Gaga’s “Born This Way” titled “Perform This Way” to which she expressed herself by saying that she was flattered and appreciated the philosophy behind the song. As comedy and Yankovic go hand in hand, the press release hosted by Roku is filled with jokes.

Unless the filmmaker plan on untruly exaggerating his life story, which they might, the audience shouldn’t be fooled by their promise of “exploring celebrity love affairs”. Yankovic got married to 20th Century Fox marketing executive Suzanne Krajewski in 2001. They have a daughter, born in 2003, named Nina.

Where To Watch Weird: The Al Yankovic Story?

The biopic ‘Weird: The Al Yankovic story’ will be exclusively available on Roku’s channel. It is a free ad ad-supported streaming platform for Smart TVs and dongles. Principal photography for the Weird Al Yankovic set began in Los Angeles in February.

Filming was wrapped in march after just 18 days of the shoot. On May 4th, the trailer was released for the first time confirming that Daniel Radcliffe would be playing Weird Al Yankovic in the biopic. A new poster for the same was released on July 27th, confirming the release on 4th November 2022.

Who Is In The Weird: The Al Yankovic Story Cast?

Who would’ve thought that the satirical video trailer for a fake Weird Al biopic, starring Aaron Paul as a hyper-dramatic version of Yankovic, would become a reality after a decade. Still, only this time Daniel Radcliffe would be playing WEIRD Al?

After the announcement of him being in the lead role, the British actor revealed that Yankovic suggested that he should play him. Adding to that, Yankovic was so impressed by Radcliffe when he sang Tom Lehrer’s “The Elements” on the Graham Norton Show in 2010, that he became adamant about casting him in the biopic. What’s interesting is that he isn’t the only big name playing an iconic character but others are too.

The office’s Rainn Wilson will be playing Yankovic’s mentor, Dr. Demento. Wood will be playing Madonna and sharing her seemingly amazing experience through Instagram where she added a picture of her as the seven-time Grammy winner and having ‘too much fun.’

Madonna made a rare instance when she presented Yankovic with the idea to parody her “Like A Virgin” as “Like A Surgeon” in the mid-’80s, she being the song’s actual artist. She even helped him to craft the spoof.

Originally, Aaron Paul was meant to have a cameo appearance in the movie, but couldn’t film during the time of production due to his illness.

What To Expect From Weird: The Al Yankovic Story?

Per the film’s synopsis, the audience can expect to see the unraveling truth of Yankovic’s life. Regarding the casting of the great harry potter- Daniel Radcliffe as weird al, Yankovic claimed that this is the role Radcliffe will be known for forever.

After the “joke” trailer released in 2010, this time we’ll actually get to see his unexaggerated real-life story covering all the facets of his life like the “torrid love affairs” and how he got the title “weird” by his peers to actually fun of him but then was embraced by Yankovic.

The comment section was filled with excitement and “can’t wait” comments when Yankovic shared the movie’s poster on his Instagram page.

The biopic is written by Yankovic and Eric Appel, who is also the executive producer for the same. Yankovic also produces, along with Joe Farrell, Mike Farah, and Whitney Hodack for Funny Or Die, and Lia Buman, Max Silva, and Tim Headington for Tango.

Appel shared that he didn’t want to hear his life story but when weird al sat him down and told his life story, he didn’t believe it and realized that now he has to make a movie about it.

Colin Davis, Roku’s Head of Original Scripted Programming added, that as there aren’t really enough biopics about famous musicians, they were really excited to bring this incredibly true, unexaggerated story of Weird Al to light.

He described the team as an ultimate combination of talent, creativity, and friends coming together and making something genuinely funny which makes Roku proud to call this a Roku original.

The teaser trailer for the film was released on May 4, 2022. Radcliffe’s costume and hairstyle mark an uncanny resemblance along with his impressive Yankovic accent and playing the famous accordion wearing the ‘responsibility’ carrying Hawaiian shirt. This barely minute-long teaser clip can be expected to give a new life and quirky and offbeat humor to musical classics.