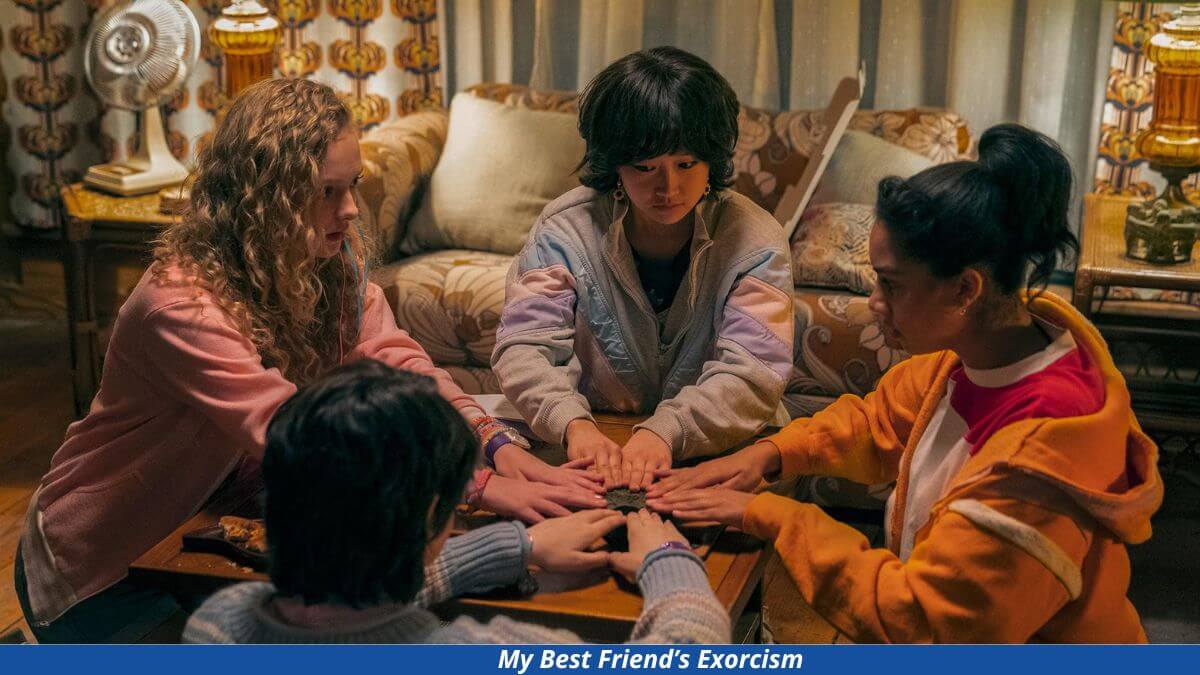 What My Best Friend’s Exorcism Be All About?

After the overwhelming success of the Netflix series, Stranger Things and Stephen king’s It– another horror with children’s storyline will be coming on-screen on 30th September 2022. The movie is set in the ’80s, to be precise 1988. The film follows the story of two high school sophomores, Abby and Gretchen, who have been best friends since the fourth grade.

Their friendship is put to a test when Gretchen starts exhibiting signs of demonic possession, which happened due to her visiting a secluded building in the woods. Gretchen starts acting very strangely after that, only to discover later that she is indeed possessed by a demon, and to solve all this her best friend gets an exorcist to perform an exorcism.

Through the trailer, it can be concluded that the film shows off an 80s horror atmosphere. One of the biggest selling points for the novel was its major 80s vibe and after the release of the trailer, this seems more and more true.

Prime Video announced the release date for ‘My best friend’s exorcism’ to be 30 September 2022. Christopher Landon, director of Freaky and Happy Death Day, signed on to produce this project back in 2018. Director Damon Thomas, who directed Penny Dreadful and Killing Eve, also got on board.

After facing a delay due to covid, the cast of the film was officially announced on April 9, 2022. Given that the novel was a cult hit, only the same can be expected from the film too. Author Grady Hendrix (also known for The Southern Book Club’s Guide to Slaying Vampires) also took it to her Twitter handle to share the cast signed for the film.

What Could The Plot Of My Best Friend’s Exorcism Be About?

The film is set in 1988 giving major 80s vibes which cannot be missed. This horror comedy film follows the story of two high school best friends, Abby and Gretchen who have been best friends since middle school. They share the closest bond but things start to change after arriving at high school.

After skinny dipping with friends, the two of them come across a secluded cabin in the woods and decide to go in. after their return Gretchen starts behaving differently- moody and irritable- and bizarre things keep happening in her presence.

Her best friend’s investigation leads to a startling conclusion and only one possible explanation- that Gretchen, her only favorite person in the world is possessed by a demonic spirit. Abby starts finding solutions to this calamitous situation with the help of some unlikely allies which comes out to be an Exorcism. Abby and Gretchen’s fate will now be determined by a single question- is their friendship forceful enough to beat the devil?

Where To Watch My Best Friend’s Exorcism?

My Best Friend’s Exorcism will be available to watch on Amazon Prime Video from September 30, 2022. As the film will be coming just one day before the beginning of October, it’ll be setting the perfect tone for Halloween.

While the film is directed by Damon Thomas (Penny Dreadful and Killing Eve) and produced by Christopher Landon (Freaky and Happy Death Day director), the screenplay is written by Jenna Lamia (previously written several episodes of CW’s 90210 and NBC’s Good Girls).

Fisher has previously worked in Eighth Grade, Despicable Me, and Miller in The Water Man, MacGyver.

Regarding the casting of the film, Thomas said that fisher was great in Eighth Grade, and was in our minds since the beginning. He described fisher as a natural actor and said she is the anchor point of the movie while Amiah is just brilliant.

Along with the “horror” and “possessed” storyline, the film parallels with typical teen-high school drama showcasing every teenager’s journey through high school.

The Talk On Social Media About My Best Friend’s Exorcism

The comments the trailer received and the poster are nothing but very promising. Some are fans of the cast members, while some are excited because they have read the book and loved it and are excited to see the movie adaptation. The best part about a book turning into a film is for people who want to experience the story but hate reading.

The film will be clashing with Parker Finn’s supernatural horror flick Smile in the theaters. But with its combination of creepy nightmare imagery and retro humor, My Best Friend’s Exorcism has every chance to become a bigger release. This film seems to be a perfect watch for teens who are a little too scared for a full-on horror film but still want to watch something creepy to spice up the Halloween season.

The story soon changes with Lemon using certain terms when he tells Abby that Gretchen is going from looking “grotesque” and “gnarly-looking” to “copacetic” but “cuckoo for coco puffs”, finally establishing the point that she is possessed. Lemon delivers the news with a high five which was received much less enthusiastically by Abby, who just learned that her childhood best friend has a demon living inside of her.