Joey Defrancesco, the munificent Jazz Organist, saxophonist, and trumpeter of America died on...
HomeEntertainmentI Think You... 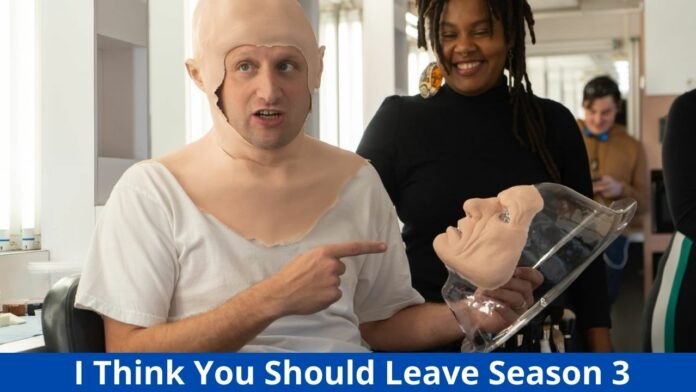 What happens when you combine sketch show veterans in a comedy series that is far more rowdy and outrageous than they are accustomed to? According to Rotten Tomatoes, he has a perfect score. The second season of Netflix’s entertaining sketch comedy “I Think You Should Leave With Tim Robinson” premiered on Tuesday, July 6, to great praise.

Tim Robinson created the crazy program with long-time colleague and co-writer Zach Kanin after working on Saturday Night Live and Detroiters together. (Kanin directs, and Robinson performs.) The under-17-minute runtime of each episode weaves together a few sketches, some of which feature choking on a hotdog, a nervous breakdown in a mall food court, and Santa Claus’ career transition from gift-bearing delivery man to action star. Most episodes have at least one eccentric (typically Robinson) who makes everyone in the scene uncomfortable and causes second-hand shame in the audience. You know who I’m talking about: folks whose social barometers are broken and who should be asked to, well, leave.

Fans have described the heavily-meme show as “extremely hilarious,” with some even “crying actual tears” and pulling a neck muscle from laughter. (You’ve probably seen the meme with Robinson dressed up as a hotdog and captioned, “We’re all attempting to find the guy who did this.”) After watching all six episodes of Season 2, viewers are wondering if Netflix will renew I Think You Should Leave for Season 3. So far, here’s everything you need to know.

Is there a Season 3 of I Think You Should Leave?

The first and primary season of I Thinks You Should Leave premiered on April 23, 2019, and consisted of six episodes lasting approximately 16–18 minutes. Season 1 stands out from the crowd and exceeds the creators’ expectations. The first season has a 96 percent approval rating on Rotten Tomatoes, with an average favorable rating of 7.55 out of 10 based on 26 reviews. The show received a 7.8 out of 10 rating on IMDb. Following the popularity of the first season, Netflix opted to renew the series for a second season. The second season was planned to be released in 2020, but owing to the COVID pandemic, the release date was pushed back to July 6, 2021, with the same number of episodes as the first.

We all know that the OTT giant Netflix normally takes a while to assess how a specific series does and what reviews it receives from its audience before deciding whether or not to make the next season. Given the second season’s release date, it’s far too early to predict whether Netflix will renew the series for a third season. We’ll have to wait a little longer before we can say with certainty whether season 3 will premiere on a streaming service. As a result, all things considered, the renewal status is now uncertain.

If the second season is as successful and well-received as the first, Netflix would have certainly and unquestionably renew for a third season. The third season of ‘I Thinks You Should Leave’ might then launch on a streaming service in either the fall or summer of 2022. Though nothing is certain at this time, we will update this section as soon as we learn anything about the third season’s premiere or release date.

There is currently no release date for I Think You Should Leave Season 3.

Expected Cast of I Think You Should Leave

At the moment, we are uncertain about a third season of I Think You Should Leave as Netflix has not so far given confirmation about the matter. Yet, we cannot lose hope that fast, which is why we are looking for the splendid cast of previous seasons, who would likely show up in the upcoming iteration if there is any.

The funny cast is a mishmash of comedy heavyweights who have previously collaborated or appeared on the same sketch program. Robinson, the show’s brain, heart, and soul, encouraged numerous SNL alums to appear, including Vanessa Bayer (Trainwreck), Cecily Strong (Ghostbusters), and Will Forte (The Last Man on Earth). Season 1 also included The Walking Dead’s Steven Yeun and Brooklyn Nine-Andy Nine’s Samberg.

Season 2 arrivals include Search Party’s John Early, Cruella’s Paul Walter Hauser, and another SNL alum, Bob Odenkirk (Breaking Bad). “It’s the thing that I get noticed for the most,” Patti Harrison (Shrill), who appears in two episodes in the second season, told GQ. In public, someone will yell, “Santa brought it early!” to me. It’s quite aggressive.”

Some Season 1 guests and favorites, including Harrison’s Shrill co-star Connor O’Malley and Sam Richardson (Veep), returned to lend their comedic talents to the show’s second season. If and when Season 3 is announced, numerous guest stars, as well as other comedic powerhouses, are likely to return. Aidy Bryant, O’Malley’s wife, and Shrill co-star may also appear.

The Expected Plot: Season 3 of ‘I Think You Should Leave’

Just like the first two installments, we are only anticipating the forthcoming season to unwind in the same way, which is partially entertaining and partially skeptical.

I Think You Should Leave is one of the most recent and hilarious TV comedies, but the premise isn’t really inventive — mainstream culture spoofs, office manners, and horrible supper dates are mainly the backbones of sketch satire. Tim Robinson and the special guests spend each segment pushing someone to the reason they need or desperately need to go. Typically, the characters in the show will make a miscalculation of judgment, get called out on it, and then—rather than essentially admitting inadequacy and saying sorry—twofold down permanently. What makes I Think You Should Leave so delightfully pleasurable is how it follows a less traveled path to pleasure while properly achieving its goal.

Is there an official trailer for “I Think You Should Leave”?

The show’s third season, as well as the trailer, have yet to be released. Netflix hasn’t revealed anything about the promotional clips or anything else. The second season was just published, so it’s understandable that many fans haven’t had a chance to see it yet. And here’s the trailer for Season 2 of ‘I Think You Should Leave,’ which is sure to make you grin and chuckle.

The Light Code Reviews – Does It Erase Your Anxiety Issues?

BioEnergy Code Reviews – Can It Clear Away All The Negative Energy In You?

Hey folks! Are you someone who is curious about the new Wealth DNA Code program? Reading this Wealth DNA Code review might help you in knowing everything you want to know about the program. There’s a quote saying that, "Money...
Sponsored

The Light Code Reviews – Does It Erase Your Anxiety Issues?

No matter how big your troubles are, here is The Light Code review, which can be a problem-solver in your life. The Light Code is a digital program that claims to offer auditory content that has healing and manifestation...
Sponsored

BioEnergy Code Reviews – Can It Clear Away All The Negative Energy In You?

Hey readers, you can spare a few minutes to read this BioEnergy Code Review, since the BioEnergy Code program promises to uncover the secrets of ultimate prosperity and abundance in life. You might be in agony of life realities, or...