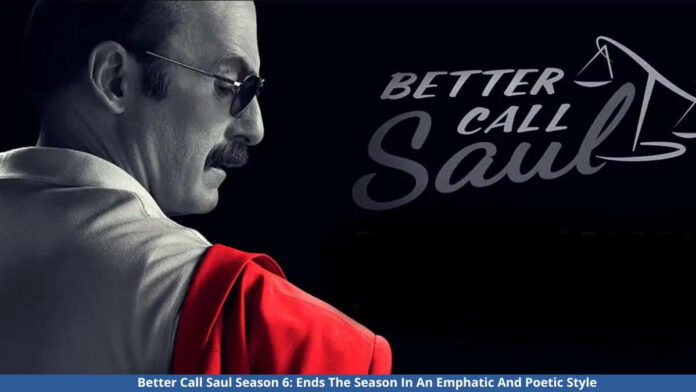 The Better Call Saul season 6 came to a dramatic end with its ever-last episode on August 15, 2022.

It was the final episode of the irrevocable final season of the AMC television series, Better Call Saul, which forcibly penetrated the climax scene which is equally getting both booing and applause.

The ultimate episode of Better Call Saul was curtained on Monday night which made an unmatched impact on the viewers as many have stepped up in claiming the uniqueness and perfection of the closure, which the showrunners chose for their absolute favorite series.

Better Call Saul fans have shared their experience after witnessing such a moving and carefully made episode, which according to them has given a beautiful; television moment- one that can be remembered in the history of the television series.

Not only the climax episode, but the series has also been gaining appreciation every time it launched its fresh episodes one after the other.

Needless to say, the episode named Waterworks, which premiered last week was a complete masterpiece with each second of it enriching the audience with goosebumps from time to time.

Hordes of fans were in the queue in recognizing and appreciating the full worth of Rhea Seehorn, who played the character Kim Wexler in Better Call Saul. The episode credit was entirely stolen by the one and only Seehorn who carried much of the moments and screen time. When coupled with the so-called bus scene, the very segment was something to be celebrated.

That will be a feather in their cap to finish the show with an unparalleled standard with which the reports of the series have been only marking good reviews throughout the viewers.

The epic sixth season of Better Call Saul premiered on 18 April 2022 with its weekly episode airing on the AMC streaming service. But the question that arose by a group of critics who asked who on earth would watch such a poetic series where thrill, love, and tragedy were equally measured as if on a balance and sprinkled here and there, is still unanswered.

They are still disappointed by the end as well, which is not a matter of amusement either. However, their curiosity has led them to finally voice their concern on who exactly was following such an emphatic series in the 21st century.

The series released a look-back teaser in a flash pattern till the fifth season, which was color lacking- in the sense, was black-n-white. Apart from that, the showrunners Peter Gould and Vince Gilligan have also broadcasted three long episodes of Better Call Saul on a dark screen, draining all the sunlight and pretty garish colors.

Viewers have been scheming on the episodes like Blue and Black, where even Howard Hamlin was getting into the game which until then was a one-man show of Kim. not only that, but they have also been saving their valuable time every Monday to watch the series without a miss.

When episode 12 ended leaving the viewers on a cliffhanger, the binge-watchers were too disturbed but they were all equally satisfied when the 13th episode aired on August 15 after a week-long wait. The thirteen-episode season was thus wound with an even lasting legacy and impact. The final episode was split into two halves, among which the first part was released on May 23 2022 and the second half was resumed on July 11.

Outside of the United States,  Better Call Saul season 6 was released on Netflix and was accepted by millions of fans throughout the world.

Better Call Saul is a prequel to the series Breaking Bad which was also written by Peter Gould and Vince Gilligan and in the reprised season, Patrick Fabian, Tony Dalton, Rhea Seehorn, Bob Odenkirk, Giancarlo Esposito, Michael Mando, and Jonatha Banks were all back with their own respective roles in the prequel.

The sixth and final season had a touch of these legendary actors and was shot in Albuquerque, New Mexico within eleven months. Although Better Call Saul season 6 received universal criticism mainly for its writing and casting which had visible similarities with Breaking Bad, the series managed to grab four nominations on its name for being the outstanding drama series.

It is quite a dilemma for the fans to believe that neither their favorite series nor their favorite characters would return ever. It was one of the best and a great end to the show.