Joey Defrancesco, the munificent Jazz Organist, saxophonist, and trumpeter of America died on...
HomeNewsWho Was Manuel... 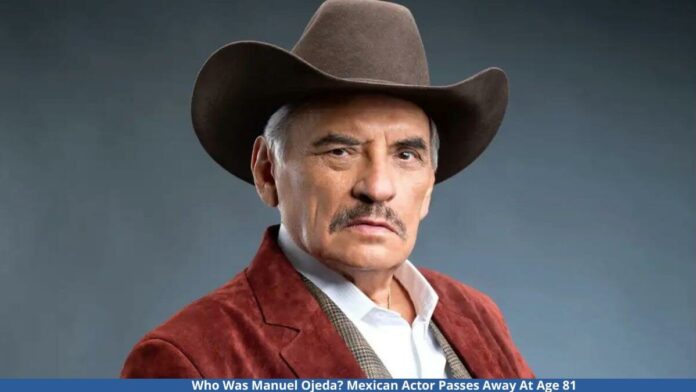 The Mexican film writer, producer, and director, Manuel Ojeda died at the age of 81 on August 11, 2022, however, the grounds of the death have not been confirmed by the authorities so far.

The massive and popular star of Mexico who was renowned for portraying the role of Villian Zolo in the English film titled Romancing the Stone in 1984 has left to the heavens after leaving his trace with more than 200 films and TV shows.

“The National Association of Actors deeply regrets the death of our colleague Manuel Salvador Ojeda “Manuel Ojeda”, a member of our union. Our condolences to his family, friends and colleagues. Rest in peace.”

In his five-decade-long career, Manuel Ojeda is still fondly remembered for the melodramas he played. The untimely death of the saga was announced by the National Association of Actors, Mexico by sharing a tweet where they showcased their bottomless grief on the demise of the profound actor, who was one of the members of the union. The Mexican actor’s guild finally shared their warm condolences to the near and dear ones of the esteemed actor.

Right after Manuel Ojeda’s death was confirmed, the Mexican Ministry of Culture was also seen expressing the passing of the icon and displayed their despair by commemorating the phenomenal actor for playing the crowd’s favorite Pedro Paramo, the man with the half moon, which was inspired from Juan Rulfo’s novel in the same title.

Followed by the tweet of the Ministry, a bevy of Ojeda fans showed up in mourning his death, with one of the fans penning about the prolific actor, referring to him as “The pillar of Mexican Cinema” having partaken in sensational films like Canoa, Las Poquianchis and Canoa.

Another fan tried to highlight the fact that many legends were seen recently bidding their final bye which obviously sucked and others unanimously agreed when one of the other fanatics said that Ojeda rose to prominence due to his sharp gaze, which often make him suitable for the roles he has been so far cast for.

Other epic stars including the theatre actor Pablo Valentin wrote in remembrance of Ojeda with whom he has shared the theatre, TV, and even deep and long talks. Valentin, 50, conveyed his acknowledgment in supporting him and sharing Ojeda’s phenomenal experiences and wisdom. The Vecino actor wished Ojeda a great journey after appreciating him for being the best ever.

Ever since Manuel Ojeda made his Telenovs appearance, his destiny seems to change. Manuel Ojeda began to receive offers from many big projects among which he agreed to La Traicion, Amor Ajeno, De Pura Sangre, Herencia Maldita, and Bajo Un Mismo Rostro.

Among the Televisa telenovelas, Ojeda was one for a noticeable period of time with many flaring Mexican films like P.D Tu gato ha Muerto.

Only a little bit of information regarding the Stray Cat actor has so far been available, yet his stardom is so wide and unmatched as many fans have shared their homage to the departed actor on Twitter. Ojeda is globally famous for his versatility throughout the incredible roles he played.

The entertainment industry has been totally shattered as it is obvious that the unique spot of Manuel Ojeda can never be replaced and that he would be deeply missed.

A Sneak Peek At Manul Ojeda’s Romancing The Stone

The opera star was born in California Sur, Manual Ojeda went to master Fine Arts and got himself placed in the theatres as a beginner. As a teen, Ojeda was passionate enough and got his hands on Calzonin Inspector, which marked his cinematic debut.

The romantic-adventure film, Romancing the Stone, helmed by Robert Zemeckis, paved a huge platform for the brilliant actor to demonstrate his talent as the villain Colonel Zolo.

After killing Elain’s husband, Zolo was set on a journey seeking the treasure map from Joan Wilder, who accidentally happened to find the map from her dead brother-in-law. Elain, Wilder’s sister, is kidnapped by Ira and Ralph who eventually asks for the treasure map as a ransom.

In the movie, Zolo appears as an antagonist who is aimed to snatch the treasure map from Wilder but ends up in a fight with Ralph and the whole team.

In the scene where Zolo and Wilder reach a crocodile pool, and one of the crocodiles grasps Zolo’s hand, Ojeda’s acting was highly appreciated.

Hand in hand with Ojeda, Romancing the Stone cast was splendid with many prominent actors like Michael Douglas, Kathleen Turner, Danny Devito, Alfonso Arau, Holland Taylor, and many others.