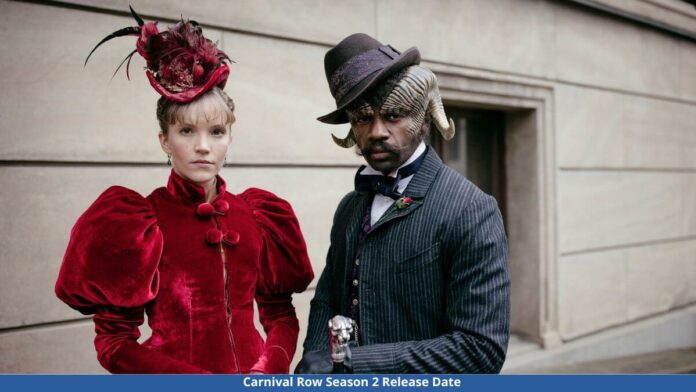 Carnival Row season 2 is likely to be released after the release of the lord of the rings: the rings of power. So, at the earliest, it can be expected to come around November of 2022.

Carnival Row is a fantasy series streaming on amazon prime video. The show has a Victorian-style dystopian historic society. The show is set in a world where mythical humanoid beings and humans are living together in the same cities. They have fled their war-torn countries and are living in this city as refugees. This causes social issues between them as it would with any group of culturally diverse people living in close quarters.

Will There Be A Season 2 For Carnival Row?

Amazon renewed Carnival Row for a second season. There is a world of three major continents and some species- and most of them are locked in interracial conflict. Carnival Row is the bustling place that exists within these worlds. As the series begins there have been countless gruesome murders.

And human detective named Rycroft “Philo” Philostrate sets up a mission that may or may not has something to do with a faerie named vignette. Faerie comes from the continent of Tirnanoc which is composed of several nations and kingdoms, all Faerish.

Vignette Stonemoss helps fae folk escape from the pact-occupied fae land onto a ship. But the ship faces a storm at sea which leaves Vignette to be the sole survivor. The ship belonged to Ezra Spurnrose who lives with his sister Imogen in one of the Burgue’s richer neighborhoods.

Having lost a significant profit in the storm, he expects Vignette to work as a lady’s maid to his sister Imogen. Vigenette goes to Carnival Row for an errand and ends up meeting an old friend Toumaline, now a prostitute, who reveals vignette’s lover Philo is alive.

The majority of the protagonists of the show are “humans” and “fae” and they live in Burgue which seems like a haven for the Faerish refugees. But it does not provide them a good life because they have to work menial jobs to survive and face a lot of discrimination. Also, things have never been worse in the city with the new ‘acting’ chancellor named Jonah who declared war on all ‘non-humans’.

Carnival Row Season 2 was renewed before the premiere of the series. Production of season 2 started in November 2019 in the Czech Republic but was put to a halt in March 2020 due to the pandemic. Again, filing took a break and resumed in May 2021 to complete the scenes involving Orlando Bloom (who plays Philo) as he was not available in 2022 due to the birth of his first child.

Orlando Bloom posted a string of photos in Sept 2021 reporting the last day of shooting season 2. But it is unconfirmed if this is the finale or if there will be the next season for this acclaimed series. The show is created by René Echevarria and Travis Beacham and is based on Beacham’s film script A Killing on Carnival Row. Erik Oleson (unforgettable, daredevil) penned down the first episode of season 2 as the showrunner Marc Guggenheim (Eli Stone, Arrow) did not return for season 2.

Most of the story for the 2nd season is set in a fictional city called the Burgue where humans and humanoid creatures co-exist with social issues between them. Even though the show has a historic aesthetic, the story is not of this world at all.

Season 2 can be expected to provide an exploration of the secrets of the Burgue and the history of the world. Showrunner Guggenheim told in an interview, “the trick with Philo is not as simple as him embracing the fact that he is fae. To the fae, he is a half-blood and not really a fae. And he is not human enough for the humans so he is basically a man with no country. That’s another thing that he will be wrestling with in the second season.”

Unfortunately, season 2 of Carnival Row is not listed in the section of amazon prime video which enlists upcoming shows and movies in august 2022. Initially, there were rumors about an august release but looks like fans will have to wait for long.

If we follow the pattern, the first season was released 17 months after the filming was done. And if the second season were to follow the same pace, it can be expected to release in the last quarter of 2022. Although the filming is done, there is a lot of CGI work to be done which will probably take months to finish. Also, there is yet no information about whether the series will follow a weekly release for its episode or it will be out at once.

Carnival Row season 2 is likely to be released after the release of the lord of the rings: the rings of power. So, at the earliest, it can be expected to come around November of 2022.

The majority of the main cast members of Carnival Row season 1 are expected to return for the second season.

Jamie Harris has been promoted to be a regular for the second season to his role as Sergeant Dombey. He is a tough police officer who strongly resents the growing influx of faeries in the neo-Victorian city.

Both Travis Beacham and Marc Guggenheim, who were showrunners for season 1, have exited the show due to artistic differences and Erik Oleson is the new showrunner for season 2.

When the Carnival Row Twitter page posted a tweet titled- “a peek behind the scenes to celebrate our last day of production on season 2 of Carnival Row”, it got many retweets and comments where fans seem to be asking a lot about the upcoming season. While some seem patient, others can’t wait to watch the next season.

What To Expect In Carnival Row Season 2?

The synopsis for the second season hasn’t been released yet but based on the ending of the first season it is likely that we will learn more about segregation. In the last episode of the first season of the series, the government released an order for the segregation of “magical” creatures from normal people. Philo realizes that this will be his separation from Vignette, he declares that he is also fae and decided to join her in the ghetto.

On the other hand, Agreus and Imogen sailed away to a safer place; however, they refuse to return to the city when the authorities ordered their ship to come back. Tamzin Merchant who played the character Imogen teased about what’s ahead for her character, told in an interview that Argeus and Imogen getting on the ship in the final episode of season 1 will be grand for the first 5 minutes of season 2.

All things considered, it can be concluded that the couple will take a more adventurous path while facing obstacles ahead and eventually their plot might merge with vignette and Philo’s. Season 2 will discover whether fae and humans end up in a war against each other or will they be able to co-exist. We’ll just have to wait and see if Philo and vignette will get a chance to be together or not.

Episode titles of the second season are not out yet but we do know that it consists of 8 episodes (just like the first season) and who has written them.

Is Carnival Row Season 2 Trailer Out?

The trailer for the second season isn’t available yet. But since the show is expected to come in late 2022, the trailer will be out soon.