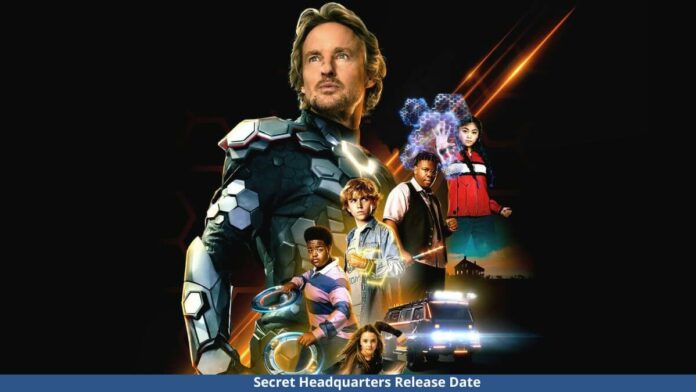 The forthcoming American superhero movie Secret Headquarters is a family action movie with comedy, adventure, and action. It is directed by Henry Joost and Ariel Schulman, who also worked on the script with Josh Koenigsberg and Christopher L. Yost. The Secret Headquarters release date is on Friday, August 12, 2022. The movie might eventually be seen in theatres in other countries.

The story revolves around a young boy (Walker Scobell) and his friends (Keith L. Williams, Momona Tamada), who start to wonder if their father (Owen Wilson) might be a superhero after finding a secret base in his basement. The cast also includes Jesse Williams, Keith L. Williams, Momona Tamada, and Larry Fong does Michael Pea. Cinematography. Beginning on May 25, 2021, Atlanta, Georgia hosted the principal photography for Secret Headquarters.

Secret Headquarters is not the tale of a typical, top-tier superhero who grabs the spotlight. Rather, this is the tale of a regular parent who also happens to be a superhero. The secret headquarters plot revolves around Charlie and his friends discovering Charlie’s father’s truth about being a superhero.

Kincaid Senior, Charlie’s father, works as a covert IT specialist. Charlie sees an opportunity to bring his buddies over and have a party one day after school when Kincaid hurries away for a “conference.” They have no idea what they will soon discover. While playing about the house, they stumble onto what appears to be a secret headquarters, which is full of weaponry, flashy vehicles, and several expensive devices.

They quickly realize that these are items that only superheroes would use. Therefore, his dad is a superhero. They feel that some of those “toys” could be used for their personal gain. Sadly, they come into possession of some technology that appears to be risky and is being sought after by several evildoers.

In addition, his father’s foes are quick to find them. In order to defend the tech and the hidden hideout from the bad guys, Charlie, and his companion band together. The difficulty is that the youngsters will need to transform into superheroes in order to accomplish this. Secret Headquarters is released on 12 August 2022.

This superhero movie is a production of Paramount Plus and thus the Secret Headquarters will be streaming on Paramount Plus. All of the content on Paramount Plus is accessible via membership and includes a vast catalog of films, television programs, sports, and unique works.

Download the streaming app for the web or mobile devices to sign up for Paramount Plus. For Paramount Plus, there are two subscription options: Essential and Premium. The basic package costs $4.99 per month or $49.99 per year and includes commercials.

The cast of Walker Scobell’s Charlie Kincaid in Secret Headquarters is among a large group of up-and-coming actors. On the cover, Owen Wilson portrays Charlie’s father as a tech expert who is actually a superhero.

Actor Owen Cunningham Wilson belongs from the USA. He shared writing and acting credits for the movies Bottle Rocket (1996), Rushmore (1998), and The Royal Tenenbaums with director Wes Anderson, he has also played Loki in Wedding Crashers.

Along with these two main performers, the Secret Headquarters cast also features Michael Pena (who has worked in many movies like Ant-Man and its sequel, fantasy world, Dora and the lost city of gold), Jesse Williams (he played Dr. Jackson Avery in series Grey’s Anatomy), Keith L.

What To Expect From Secret Headquarters?

The Paramount Pictures film “Secret Headquarters” is scheduled to arrive in theatres on August 12, 2022. This one is presently anticipated to be an exclusive theatrical release, so people who want to watch it as soon as it becomes available will need to go to a theatre.

After the 45-day theatrical window expires, it’ll probably end up on Paramount+.it is an original action/comedy called “Secret Headquarters” which is marketed as being suitable for children and family. This film is an original idea, not an adaptation from any earlier source material, be it a novel or a rerelease of an already existing property—a relative rarity in contemporary Hollywood. Additionally, it is said that the story has a “high concept,” however it is unclear what exactly that term entails.

The movie’s synopsis is as follows,

“A little boy finds the world’s most powerful superhero’s underground base of operations and must protect it with his buddies when foes strike in this high-concept family action movie.”

Like anyone would expect from a superhero movie, the two-and-a-half-minute trailer scene is filled with great VFX, lots of action, and plenty of excitement. Kincaid’s conflicted nature can be easily observed as well. On the one hand, according to his son Charlie, he is a bit frail and can’t even handle spicy wings. Then, when Charlie discovers his father’s true profession, we get to see a completely another side of the typically clumsy, suburban parent.

This movie has good potential because its premise is novel, creative, and completely original. It is Paramount Plus’s own interpretation of the superhero genre.

According to what can be deduced from the teaser, Secret Headquarters is going to be a welcome diversion from the world of rollicking, internationally renowned superheroes. There are also a lot of references to traditional superheroes.