Joey Defrancesco, the munificent Jazz Organist, saxophonist, and trumpeter of America died on...
HomeEntertainmentFive Days At... 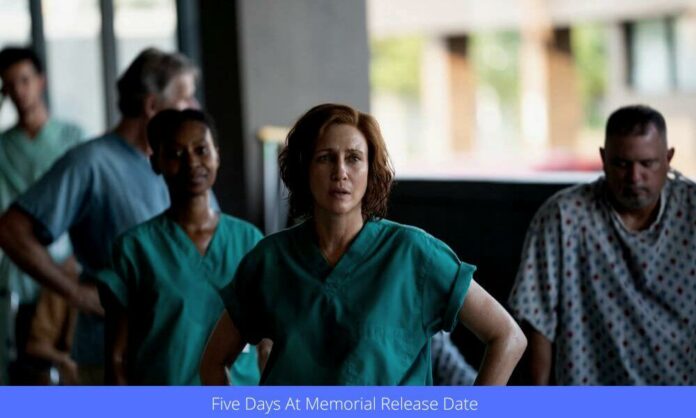 This series also took its adaption from a book called Five Days at Memorial which is written by Sheri- Fink who is also a Pulitzer Prize-winning journalist. The book narrates the impact that Hurricane Katrina left on the city and the aftermath of the hospital Memorial Medical Center.

Five Days at Memorial Release Date And Where To Watch!

Five Days at Memorial showcased all the struggles and challenges medical staff workers of the Memorial Medical Center went through. Because of Hurricane Katrina, thousands of people were stuck inside the medical center that is situated in New Orleans.

The series shows all the details of how because of the increasing level of groundwater, running out of supplies and power failure in the hospital the tired caregiver had no choice but to make hard decisions that still haunts them to this day.

The series is written and executive produced by Carlton Cuse and John Ridley who is also an Emmy Award winner and it is directed by Wendey Stanzler, John Ridley, and Carlton Cuse.

Are Five Days at Memorial A True Story?

There is absolute chaos at the hospital and causality after causality is taking place everywhere in the hospital. This chaos goes on for five days. For full five days, the staff and people who got trapped inside the hospital had to live with no power supply. And it was very hard for the caretakers to treat patients with limited resources and no power.

The Series portrays how unimaginable decisions the caretakers had to make for the survival of the people trapped in the hospital. These decisions were about who should be the one to be given care and they were never easy for them to make but they were forced to do it as they had no other choice, whatsoever.

Five Days at Memorial is expected to be premiered on 12 August 2022 and it will consist of 8 episodes. And only the first three episodes of this series will air on August 12, 2022, and all the other episodes will be coming out on weekly basis. So, the show will run from 12 August 2022 till 16 September 2022. It is a miniseries which will be released worldwide on Apple TV plus.

Den Of Thieves 2 Release Date, Cast, Plot & Everything We Know So Far

Five Days at Memorial cast include:

The role of Karen Wynn is being played by Adepero Oduye she is so much more than just an actor, she is also a singer, writer, and director. She is best known for her role in the movie Pariah, The Big Short, Widows, and 12 Years a Slave.

The role of Dr. Bryant King is being played by Cornelius Smith Jr. who is famous for his role in a drama series called Scandal where he played the role of Marcus Walker. He has even worked in a soap opera called All My Children as Frankie Hubbard. Smith was also nominated for Daytime Emmy Award for an outstanding younger actor.

The role of Diane Robichaux is being played by Julie Ann Emery who is famous for her role in the television show called Preacher. She is also been seen in the series called CSI: Miami, Hitch, Commander in Chief, Fargo, and Taken Line of Fire.

The role of Susan Mulderick is being played by Cherry Jones who is also famous for her role in the heiress which is a broadway production and she won her very first Tony Award for Best Actress in the play.

The role of Virginia Rider is being played by Molly Hager who is best known for her role in Botox Angels, It’s Kind of a Funny Story, and Mad City. She is also a writer along with an actor.

The role of Arthur” Butch” Schafer is being played by Michael Gaston he is well known for his role of Quinn in the show Prison Break and Gray Anderson in a drama series called Jericho. He also made an appearance in the very first episode of The Sopranos where he played the character of Alexx Mahaffey.

The role of Michael Arvin is being played by Joe Carroll, he is well known for his role in FBI, Bandstand: The Broadway Musical on Screen, and Romeo and Juliet.

These are some of the cast members of the series’ five days at the memorial.

The Talk On Social Media About Five Days at Memorial

When the trailer of the series came out it was liked by all and people waiting for this show were praising and talking about it all over social media. They all cannot wait for it, as they want to know what will happen.

What To Expect From Five Days at Memorial?

Lots and lots of drama, chaos, and nerve-wracking decisions are to be expected from this series. Five Days at Memorial will show how the caretakers with the help of their thinking and unimaginable choices were able to save so many people during the disastrous event of Hurricane Katrina. Out of thousands of people that were stuck inside the medical center only 45 people died even with limited resources all because of the quick thinking of caretakers.

Even though, the caretakers saved so many lives but the harrowing decisions that they were forced to make still haunt them to this day.

Five days at the memorial is a miniseries and it comprises 8 episodes.  The title of all the episodes is still not known. And on August 12, 2022, the world will be able to see the first 3 of the show episodes whereas; the other 5 episodes of the show will be airing on weekly basis. The last episode of this series is expected to be released on September 16, 2022. Five Days at Memorial is just days away.

The very first official teaser of this Five Days at Memorial series was released on June 22, 2022. And the full official trailer of this was released on July 13, 2022, which gives a sneak peek of this miniseries. The trailer gives us a quick glance at tragic events that took place in Memorial Medical Center, New Orleans. All the chaos, deaths of people, and, how the caretakers were made to push through their limits.