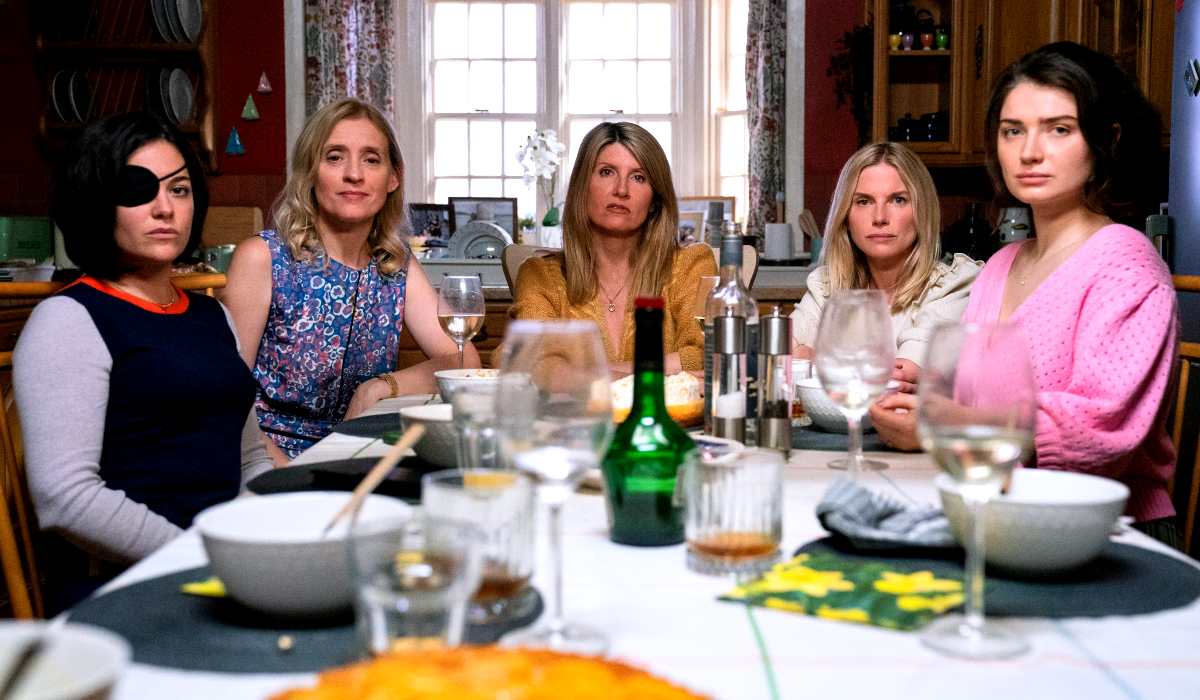 An audience that fancies dark humor is all set for a treat with the new show set to premiere on Apple Tv+. Titled Bad Sisters, the series is a thriller filled with a lot of dark humor. Bad Sisters is based on a series created by Malin-Sarah Gozin titled “Clan”. The series originally had a different title which was “Emerald”. Bad Sister’s plot basically revolves around five sisters who get close after a terrible family tragedy.

The Garvey sisters lose their parents to premature death and that brings them closer, wanting to protect each other at all costs. The show is created by Sharon Horgan who signed her deal with Apple back in the year 2019. This is her first project under the same deal. Sharon Horgan is extremely talented, it is only fair that we expect her to do justice to the Flemish series “Clan”. Bad Sisters will stream on Apple Tv+ in August this year. Further, in the article, we will get to know more about the Bad Sisters’ release date, filming, cast, plot, and what the audience is expecting out of the show.

Where Can I See Bad Sister?

Bad Sisters is set to premiere on August 19. The creator of the show has had other successful projects like “Catastrophe” and this is her very first project with Apple. Bad Sisters is adapted from the Belgian dark black comedy series “Clan”, created by Malin-Sarah Gozin.

The show has been shot between London and Dublin and if it does justice to the show it is being adapted from then the audience is definitely in for a treat. The writers of the show include Karen Cogan, Ailbhe Keogan, Daniel Cullen, Perrie Balthazar, and Paul Howard. The show is directed by Dearbhla Walsh, Josephine Bornebusch, and Rebecca Gatward.

The upcoming dark comedy by Sharon Horgan will be released globally on August 19, 2022, on Apple Tv+. It is said to have 10 episodes out of which the first two episodes will be released on the launch day itself.

One sister marries a prick and the rest have to put up with him.

Created by @SharonHorgan, see how far the Garvey sisters will go to save their family when #BadSisters premieres August 19 on Apple TV+https://t.co/je2mJ0M6Lc pic.twitter.com/MLqkbHlPWm

When the project for Bad Sisters was first taken up, as mentioned earlier, this show was supposed to be called “Emerald”. The main sisters are going to be played by Sharon Horgan, Anne-Marrie Duff, Eve Hewson, Eva Birthistle, and Sarah Greene. The creator of the show Sharon Horgan herself is going to be a part of the cast of the show.

She is going to be portraying one of the Garvey Sisters who are the main characters of the show. She has also co-written and starred in the hit series “Catastrophe”. She was also a part of well-known shows like “Divorce”, “Motherland”, “Pulling”, “Military Wives” and more.

Anne-Marrie Duff is famously known for her character Fiona Gallagher in the series “Shameless” which is also a dark comedy. She has also starred in the famous show “Sex Education”. She seems to be suited for her role as she clearly has experience acting in this genre. Eva Hewson was a part of the thriller movie “Behind her Eyes” the series “The Knick” and more. She is the daughter of “with or without you” singer Bono who was a member of the famous band U2.

Eva Birthistle and Eve Hewson have previously worked together in “Behind Her Eyes”. Sarah Greene has also been part of significant famous work and we are looking forward to seeing what she has to offer in this show. Besides the sisters of the show “Bad Sisters”, the cast also includes Brian Gleeson, Daryl McCormack, Assaad Bouab, Claes Bang, and Saise Quinn who is fairly new to the industry. The cast of the show is indeed full of talent and showed a lot of promise in their respective previous roles in the movies and shows hence, the chances of the show being a success are high.

Bad Sisters is being talked about on social media and the viewers are excited to see what Sharon Horgan will bring to the table this time. Since this is her first project under her deal with Apple, Bad Sisters is receiving a lot of attention. The show’s snippet trailer was seen on Instagram on the Apple Tv page as well as on YouTube. On Instagram, it is trending with the hashtag #BadSisters#AppleTv.

The audience, in their comments on the posts with several pages related to the show, expresses how they will need to subscribe to Apple TV to see the show and how they hope it gets released on other platforms as well. They also express that the show is going to be amazing after seeing the trailer and have vile comments about Claes’s character since he seems unpleasant in the trailer. All in all, the audience is rather ecstatic to see how the show turns out and is eagerly waiting for Bad Sister’s following episodes.

What To Expect From Bad Sisters?

The Apple Tv+ show “Bad Sisters” is all set to release on August 19, 2022, and it is an adaption of the Flemish show “Clan” which was a dark comedy thriller. The show revolves around five sisters who have lost their parents, and while witnessing this tragic event, they get closer to each other and make a promise to protect each other at all costs and remain close and united.

As sweet as the plot sounds, it also has a catch and after seeing its trailer we can only expect that the family ties are not leading to saintly behavior in fact the bond now formed between the sisters has now encouraged them to go to any length whatsoever for the protection of whatever is left of their family. This includes some deeds that are crossing their mind that is not only unethical but also against the law. From what we have gathered from the plot and trailer, the audience can definitely expect things to go haywire after the tragic event and promises that initially meant well.

The show is most likely to have 10 episodes in its first season and the first two episodes will be released on Apple Tv on August 19, 2022. This is all the information there is about the show but since the plot looks extremely catchy, we hope that our thirst for the thriller dark comedy is satisfied with the number of episodes and hopefully there are more seasons as well.

The official trailer was released a while back and had a great reach due to its intriguing storyline. At the beginning of the trailer, we see the priest talk about the deceased at the funeral and some mockery in the middle of a rather emotional time, by one of the sisters. Further one of the sisters says that nothing worse could happen immediately after which the casket falls down during its burial which is rather funny because of the irony of the situation.

As the trailer continues, we see two people who seem to be law enforcement and one of them suspects that there was foul play involved in the deaths. We understand by this where the plot is taking us and further, we see that the sisters show that they aren’t fond of their brother-in-law and that they are suspicious of him.

They are seen to be talking about him and their conversations suggest that they are willing to remove him from the picture for reasons that seem valid and fair to them. After seeing the trailer a certain enthusiasm is filled within and anticipations begin as to how the series of events will take place.