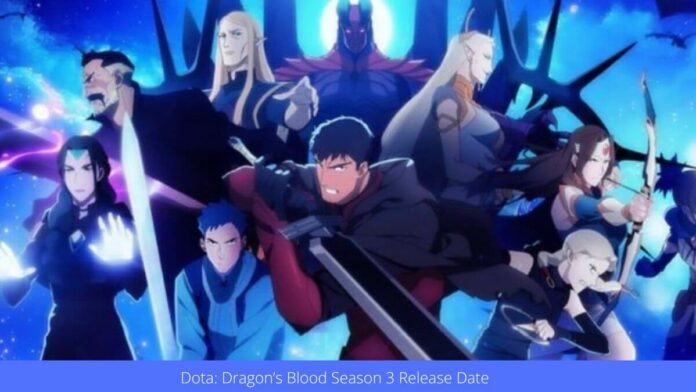 Anime has captured the interest of a lot of people over the years. It’s strange and somewhat fascinating how something animated could grab the attention of such a vast audience which doesn’t just include children but fully grown adults. Dota: Dragon’s Blood is coming with season 3 which is going to be released on Netflix on August 11, 2022.

According to avid anime watchers, these shows somehow manage to induce more emotions than the series and movies that are portrayed by non-animated characters.

Dota: Dragon’s Blood Season 3 release date was announced a while back and the fans are looking forward to the same. Season 3 will be called Book 3. Dragon’s blood has the genre of epic fantasy associated with it and has gained a significant amount of popularity. Davion is the protagonist of the show. He wants to make his world a safe place to live in. He does so by slaying dragons.

The plot of the show revolves around him and Princess Mirana who try to stop Terrorblade, the demon who wants to kill all the dragons and collect their souls. In the show, Davion has his soul merged with another dragon after a battle and that is all the more reason to stop Terrorblade.

Further in this article, we will get to know about Dota: Dragon’s Blood season 3’s release date, plot, where it will be streaming, the cast involved, its episodes, and more.

Will There Be Dota: Dragon’s Blood Season 3?

As mentioned earlier Dota: Dragon’s Blood is coming with a season 3 which is going to be released on Netflix on August 11, 2022, and is called Book 3. The show is based on a video game series with the same name. Studio Mir and Kaiju Boulevard are the production companies for the show. The length of every episode is about 26 to 28 minutes.

Most of the original cast is likely to appear in the new season except the ones who were killed in the previous seasons which included a few important characters, unfortunately. Season 2 of this show had a very impactful ending and it took the audience on a great ride.

The Helio Imperium arc comes to an end towards the season 2 finale. Season 2 sowed the seeds for a rather amazing plot for season 3 and we are here for it.

Dota: Dragon’s Blood season 3 was officially confirmed by its creators and is going to be released on Netflix on August 11, 2022. If the new season follows the pattern of the previous seasons it will most likely have 8 episodes.

Most of the previous cast of the show will be a part of the new season except the characters that have been killed and are not likely to return.

The announcement of Dota: Dragon’s Blood season 3 on Twitter by its production company Studio Mir was attached with an image that had all of the show’s heroes including some who had not even appeared on the show. Due to this, the fans anticipate that there might be a few heroes who will return even after they died in the previous seasons and the fans also have some new characters to look forward to.

The audience expects season 3 to have wars between the Ancients as that is what happens in the game, which is the inspiration of the show. According to the audience if the show does follow the game and brings in the war between the ancients, then, they will be introduced to new heroes.

The audience thinks that as the previous seasons have a reputation for including a lot of deaths, they will experience more of that as well and since season 2 ended with a cliffhanger, great content will be offered by the new season.

After watching the trailer fans have expressed how thankful they are that the show didn’t end with season 2 and that there is more to come. Some of the audience also expressed that they think the show is underrated and doesn’t get enough appreciation for what it truly is. The audience also hopes that the series doesn’t end in terms of the DOTA series.

Fans expressed their love for fantasy and how they want to see more of their favorite character. While the audience was sad that they lost Marci and a few more characters they are hyped for the return of season 3.

Avengers: Secret Wars Release Date, Cast, And Everything We Know So Far!

Bones And All Release Date, Cast, Trailer Where To Watch, And More

What to expect from Dota: Dragon’s Blood Season 3?

Much was not revealed about the plot of Dota: Dragon’s Blood Season 3 but seeing what the previous 2 seasons offered, it is only fair to have high expectations from the upcoming season which is soon going to be released.

As Slyrak is no longer attached to Davion, we can only expect great encounters between Davion and Terrorblade without the interference of Slyrak, also the encounter between Slyrak and Terrorblade, which is a battle the audience will be looking forward to since that was something they couldn’t witness in the previous seasons.

With the dragon being separated from Davion, a lot of things will change. Looking at the images that were released and the teasers, we see that Syrak and Davion are in contact and we will find out how and why that is still happening. All of the unanswered questions are most likely to be answered in Season 3.

Dota: Dragon’s Blood Season 3 is being released on august 11, 2022 on Netflix, and as of now, we don’t know how many episodes it is going to have. Although, as mentioned earlier, its previous seasons had 8 episodes each and it can be expected that this new season might also have the same number of episodes or perhaps even more.

The trailer showcases the characters having a confrontation and Terrorblade making a threat yet again. The cast of the show is seen doing their best in the trailer to stop Terrorblade and Davion asking how he can be killed. The trailer has great background sound effects and amazing animation and we get to hear the powerful dialogue.