Riverdale Season 7 Release Date: Will There Be Season 7? 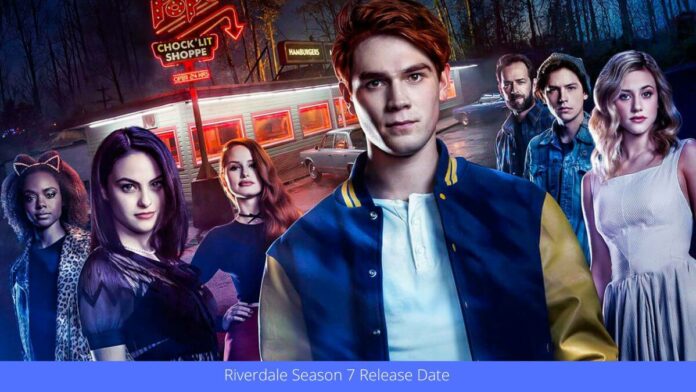 Riverdale is an American teen drama television adapted by Archie Comics and created by Roberto Aguirre-Sacasa. This series is based on the characters of the incredibly famous Archie Comics. The production houses of Riverdale are Warner Bros Television and CBS Studios. The show’s first episode premiered on January 26th, 2017. Riverdale Season 7 expect to be released on March 2023.

Season one dealt with the mysterious and tragic death of Jason Blossom. The characters of the show were seen resolving his death. Finally, figuring out the culprit behind Jason’s death. Season 1 ended up having gained a lot of popularity. Consequently, the show was renewed for further seasons.

Riverdale is an incredibly famous teen drama series for its confounding plot lines and character interactions. The series started as a run-of-the-mill teen drama with a bit of mystery and romance as its theme, now five years after its first release the show has come far to its sixth season having a mixture of a lot of genres out there.

Spiraling about dealing with the themes of mobsters, killer nuns, cult leaders, addictive games, Drugs, serial killers, possessed dolls, and a high voltage drama. It has become of the highest views shows out there in the market.

The filming of the show takes place in Vancouver, British Columbia.

The latest season 6 of Riverdale which is currently airing weekly on Netflix and The CW has gained quite attention from viewers across the globe for its outstanding and amazing plot twists, dealing with witches, human sacrifice, possessed dolls, and serial killers.

Percival changes the course of the comet and Tabitha warns everyone that the comet will eventually destroy the town. It is expected that the season finale will reveal the course of action of the approaching bailey’s comet, and it will most probably fill with a lot of action and drama. It is going to be a fight between good and evil.

Tracing the course backward to the beginning of season 6 of Riverdale, the first five episodes of Season 6 of Riverdale took place in a parallel universe and continued from the ending episode of season 5 where Archie, betty, and jughead were seen in a bomb blast at Archie’s house. Which resulted in Riverdale having a multiverse known as (Rivervale, “you will never want to leave”).

These five episodes were dealing with horrific events, ghosts, witches, The devil himself, and mystery and explored the genre of horror and terror. It also showed the death of Hiram Lodge (played by Mark Andrew Consuelos), the Sacrifice of Archie Andrew (played by KJ Apa), Reggie mantel (played by Charles Melton) going to hell, and Toni Topaz (Played by Vanessa Morgan) sacrificing and taking over the role of La Llorona.

The second half of season 6 continues from episode 6, where everything goes back to normal in the town and the multiverse switches back to Riverdale from Rivervale but at the beginning, it portrayed a certain consequence of the bombing that took place in season 5 the last episode.

Archie, betty, and jughead were seen having some superpowers. Jughead also lost his hearing ability, Cheryl got trapped by a witch who inhabited her body, and a new character named Percival Pickens was introduced.

The episode guide for the Riverdale season 6 episodes that premiered on Netflix and The CW are:

The Talk On Social Media About Riverdale Season 7

With the ongoing season, 7 of Riverdale fans are excited about the upcoming fate of the certain ongoing love stories on the show. Fans are seen speculating about the faith of the ongoing romantic tension between Toni Topaz and Cheryl blossom.

Also on the same hand, there have been multiple tweets and comments from the fans requesting the makers of the show for the introduction of romantic scenes between Archie Andrews and betty cooper. Fans are rooting for Barchie (the fan-based name given to Archie and betty) to be the end game.

Fans are also left wondering about Cheryl’s and Veronica’s kiss, a snippet of which was shown in the trailer of the season finale episode.

Certain recent tweets were done by the official Riverdale account speculating and teasing the fans saying “ whether jughead will be able to save the soul of Riverdale?”. This left the fans wondering what the fate of the show will be. Fans are also speculating whether the show will get renewed for season 7.

What Is Riverdale season 7 To Be About?

Riverdale Season 7 Plot is expected to revolve around the coming of the astronomical event (The Bailey’s comet) that was previously mentioned in the multiverse (Rivervale) episode 4 of season 6. Episode 22 may be the season’s finale, where Archie Andrew and his friends are anticipated to come together to fight the most important danger ever hovering around their town Riverdale. A lot of drama, action, and death are expected in the season finale episode.

Since Riverdale Season 7 trailer was not released yet. So you can watch the trailer for season 6.

Ryan Murphy’s Monster: The Jeffrey Dahmer Story is now on Netflix. Although the series gave us an idea about how not a child should be raised and how poor parenting results, it also has another side, where it talks...
movie

Directed by Mark Mylod, "The Menu" is an American black comedy horror movie. The movie "The Menu" is all set to hit the cinemas on 18 November 2022 (Friday). There is no news about movie streaming on other online...
movie

Knock at the Cabin is an American movie that explores the genre of psychological horror. The movie is directed by M. Night Shyamalan and is based on the novel The Cabin at the End of the World, written by...