Avengers: Secret Wars Expected Release Date, Cast, And Everything We Know So Far! 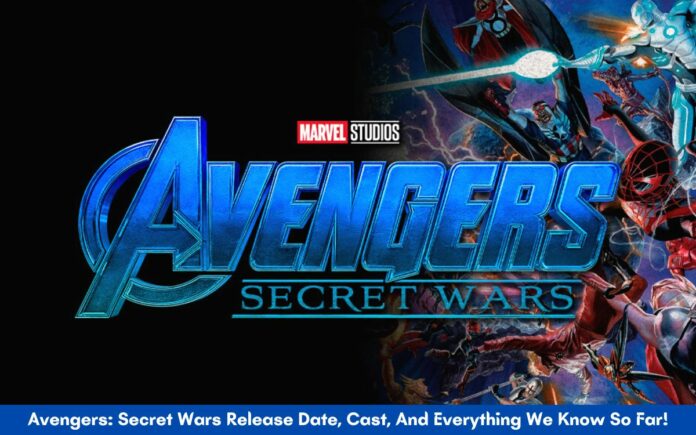 During San Diego Comic-Con 2022, Marvel Studios made an appearance and unveiled a number of new projects, notably two Avengers movies that would be released in 2025.

The Kang Dynasty, the first of the Marvel movies, is expected to center on Jonathan Majors’ time-traveling antagonist, who initially debuted in Loki and is expected to make a comeback in Ant-Man and the Wasp: Quantumania.

The Avengers will reunite barely 6 months later for Secret Wars, which is expected to conclude the Multiverse Saga that spans stages four through six of the Marvel Universe.

The title “Secret Wars” may have made longtime Marvel fans tremble. The Avengers: Super Hero Secret Wars from 1985 by Jim Shooter and a second film, Secret Wars from the year 2015, written by Jonathan Hickman, are the two books that served as the basis for the film’s inspiration. Battleworld, a planet possessing aspects from every Marvel multiverse dimension, is involved in both the major events of the comics. Both projects aim to include as many Avengers heroes as they can in a single production.

Although the news of Avengers: Secret Wars was welcomed, it wasn’t entirely unexpected. The Marvel cinematic universe is preparing for Secret Wars, as clearly indicated in Doctor Strange and the Multiverse of Madness.

If the MCU’s past has shown us anything, it’s that Avengers: Secret Wars won’t be a straight remake of any one comic book, but rather will incorporate elements from a variety of stories.

In light of this, it is definitely reasonable to say that Avengers: Secret Wars has drawn more inspiration from the 2015 graphic novel than the initial 1984 series.

For starters, the more recent Secret Wars book has received significantly more positive reviews than the earlier one, which was essentially a toy advertisement disguised as a comic.

It is estimated that Avenger’s Secret War will be the concluding part of the Avengers saga series written by Jonathan Hickman but not yet confirmed.

Kevin Feige, the head of the Marvel Cinematic Universe, said at San Diego Comic-Con 2022 that Avengers: Secret Wars would be released in theatres in, november 2025.

The movie is expected to be released barely 6 months after the fifth phase movie, Avengers: The Kang Dynasty, which will open the summer blockbuster season in 2025 on Friday, May 2. It is said that the Kang Dynasty will create the stage for the Secret Wars just like Avengers Infinity wars created for the blockbuster Endgame.

Avengers: Secret Wars and its predecessor The Kang Dynasty don’t yet have a single cast member confirmed by Marvel Studios, although several characters seem like obvious choices.

For instance, if the time-traveling antagonist Kang The Conquerer isn’t eliminated at the end of the first movie, Jonathan Majors is expected to play him in both movies.

It’s also anticipated that these films will mark the first appearances on the big screen of some of Marvel’s newly introduced Disney Plus heroes, such as Moon Knight, played by Oscar Isaac, and She-Hulk, played by Tatiana Maslany.

We can’t completely rule out the possibilities of further appearances from earlier Marvel franchises, including Fox’s X-Men and Sony’s Spider-Man, considering that this movie will serve as the conclusion to what is being referred to as The Multiverse Saga.

Talks On The Social Media About the upcoming Avengers: Secret Wars

The announcement of the release of Avenger’s Secret Wars shook the social media platform as Marvel fans are eagerly waiting for them to release. Although the show’s official Twitter and Instagram pages have not made much activity recently, and the creators have not shared much apart from the poster, the followers are impatiently awaiting for the trailer to be released.

Fans were seen constantly tweeting where they speculate who the new cast will be and what characters will newly be introduced. Some of the tweets that Marvel fans made :

“The Russo brothers claim that when they were younger, Secret Wars was their favorite comic book series and that the live-action adaptation will outperform Infinity War or Endgame.”

“Rumour has it that Tobey Maguire will make a comeback in Secret Wars and wears the black suit once more with respect to that movie. “

“Wouldn’t it be Awesome if Tom Holland’s Peter Parker in Secret Wars wore the black suit? It would, yes. “

“When Kang Doom traps all of the Superheroes from the Multiverse in BattleWorld at the climax of The Kang Dynasty for Secret Wars.”

What To Expect From the upcoming Avengers: Secret War?

Although both the books share the same title, there have been two significant Secret Wars plots in the graphic novels, and they are both quite different.

The very first Secret Wars began in 1984 when a celestial being identified as the Beyonder abducted the most well-known Marvel superheroes to Battleworld and made them fight for his amusement.

The comic book, though immensely successful, was criticized at the time for having a thin plot that looked to be intended to sell toys, but it is still popular among many readers who were growing up at the time.

A more positive critical response to a modern interpretation of Secret Wars that took place in 2015 was a horrific invasion between Earth-616 (the regular Marvel One) and the Ultimate Marvel Universe.

The character Doctor Doom uses the power of the Beyonders to develop a new Battleworld that combines every other reality in the Marvel universe in an effort to stave off total devastation.   He naturally establishes himself as Monarch. Most Avengers heroes and villains don’t confront the bizarre new world they find themselves in because they have no recollection of their life prior to Doom’s new world order.

These were the two storylines of the prior two Secret War comics. And now in the film adaptation, it is expected that the MCU will adapt the elements of both the comics and create its own new one.

Like every other Marvel movie, the storyline is connected in one way or another. It is expected that Avengers’ Secret Wars will be the next part of the Kang Dynasty.

Therefore, it is advised to the viewers to watch all five parts of the Avengers saga series including The Kang Dynasty before watching Secret Wars.

Is Avengers: Secret Wars Official Trailer out yet?

The trailer for Avenger’s Secret War is still yet to be released. The makers have not yet released any information about the movie except for the poster and release date.