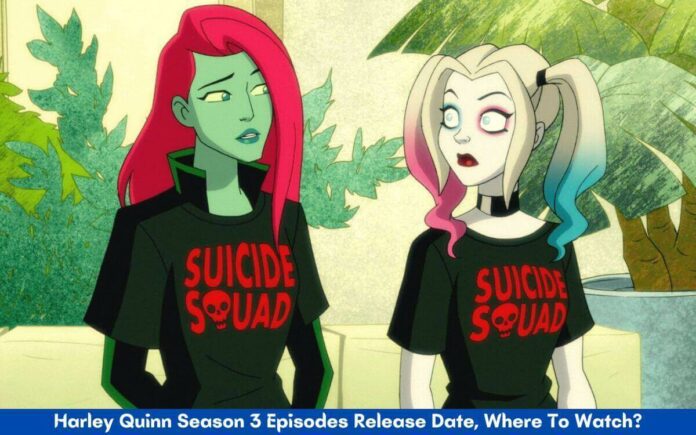 Harley Quinn is an American adult comedy animated series which is based on the DC comic characters. It is a superhero comedy created by Paul Dini and Bruce Timm. The show was directed and produced by Justin Halpern, Patrick Schumacker, and Dean Lorey.

The show revolves around the character of Dr. Harleen Frances Quinzel, most known as Harley Quinn (voiced by Kaley Cuoco), who is known to be one of the most iconic figures in the DC Universe. In this animated series, Harley Quinn is seen as a former member of a team of the world’s leading supervillains (called the Legion of Doom).

Harley Quinn Season 3 Release Date: Where Can You Watch The New Season?

As soon as she broke up with the joker, she got kicked out from the legion of Doom which in turn motivated her to do something for herself and she founded a team of her own called Harley’s crew (comprising the C-list baddies).

Harley Quinn is a very unpredictable and impulsive character who does not think twice before doing something. But Harley’s origin is quite sad and far from villainy. She had an abusive childhood, with a deadbeat father.

In season 1 of this WorldClass animated series, Harley was seen having a troubled time dealing with her breakup with the Joker, but eventually, Harley allowed herself to figure out who she was outside of the Joker and tried her best to manifest the life that she always wanted for herself, which was to become a supervillain on her terms.

Season 2 of Harley Quinn was seen to be quite chaotic for Harley as she moved on after her breakup with the Joker and she finally understood what it was to truly fall in love with someone. However, Harley’s love interest, Poison Ivy, did not seem to acknowledge her love for Harley.

There were so many feelings of unrequited love involved in season two but eventually with the season-ending the viewers saw that Harley and Poison Ivy finally found their way back to each other after a turmoil of emotions and distress.

Where To Watch Harley Quinn Season 3?

Immediately after the wrap of season 2 of Harley Quinn, an announcement was made regarding the series being renewed for a third season on September 18, 2020, which would be premiering on HBO Max instead of the DC network.

It was also revealed by Patrick Schumacker during an interview that several few writers will be joining the team for the third season of the show. He also stated that Dean Lorey will no longer be available to return as the showrunner for season three of Harley Quinn and will in turn be replaced by Chrissy Pietrosh and Jessica Goldstein as co-showrunners.

It was also confirmed that forthcoming Harley Quinn season 3 streaming will be done on the online streaming platform, HBO Max. The show will have a total of 10 episodes

Those who would have attended the San Diego comic con will be the lucky ones as the Harley Quinn season 3 episodes 1 and 2 would have premiered there before its official release date, which is July 28, 2022.

The Harley Quinn season 3 plot will be Harley and Poison Ivy-centric. The Madhouse and uproar will continue in this forthcoming season 3 of the incredibly popular adult animated series Harley Quinn. The viewers will see THE comeback of the power couple of DC villainy, Harley Quinn (voiced by Kaley Cuoco) and Poison Ivy (voiced by Lake Bell), returning to Gotham. Along with their crew, King shark, Clay’s face, and Frank the plant, Harley and Poison ivy will be seen fulfilling Poison ivy’s goal of transforming Gotham into an Eden Paradise side by side, becoming the best version of themselves.

The Car Masters, Rust to Riches season 3 release date was announced quite a time ago and was also released on Netflix on August 4, 2021, having a total of eight episodes. The show revolves around the crew of the Gotham garage.

Harley Quinn season 3 is expected to premiere on July 28, 2022, on the online streaming platform HBO Max.

The Talk On Social Media About Harley Quinn Season 3

Fans are eagerly waiting for the third season of this dark adult comedy. These are certain tweets from fans regarding the upcoming season of Harley Quinn

“Harley Quinn Villain of the year #1 Gotham City Girls” and “Just finished my Season 2 Harley Quinn binge watch and ready for HarleyQuinn season3!!!”. Thus, fans to be excited for season 3.

Must Check: Tony Dow Net Worth: ‘Leave It To Beaver’ Star Dead At 77!!

Apart from this season 3 of Harley Quinn has received its official ‘Harlivy’ Twitter emoji celebrating the comeback of the romantic relationship between Harley Quinn and poison ivy.

What To Expect From Harley Quinn Season 3

Talking about season 3, Patrick Schumacker and Justin Halpern said that they would want to indulge more in the character of Poison Ivy. The viewers could expect the backstory of poison ivy’s character and a perspective of things from her point of view.

The focus will be paid to exploring the dynamic of the relationship of the new power couple Harley and Ivy and how things will be different for these two ladies being finally in a good relationship after years of being in toxic ones and this would seem to affect their new relationship with each other.

The Harley Quinn season 3 cast will remain the same to a certain extent but It was also stated that Fans should expect to see more beloved superheroes and villains of the DC Universe. Showrunners Schumacker and Halpern have also confirmed the appearances from Night wing, John Constatine, Mad Hatter, Clock King, and Amanda Waller.

The episode guide for season 3 of the Harley Quinn series is as listed below: