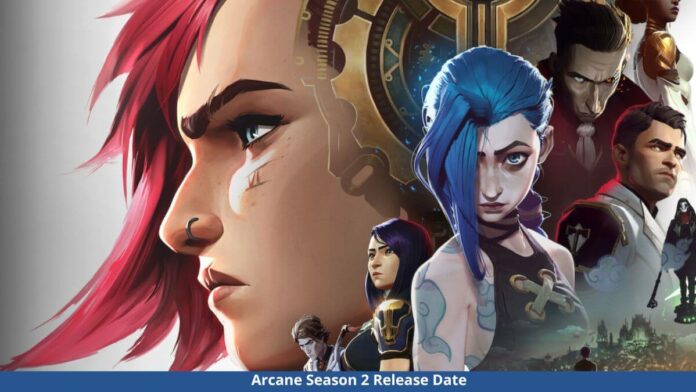 Christian Linke and Alex Yee are the creators of the action-adventure streaming television series Arcane, named Arcane: League of Legends on screen. Arcane season 2 has not yet received an official release date. But since the show’s comeback was announced after the season 1 finale, we know it’s coming. It is set in Riot’s League of Legends fictitious universe and largely centres on sisters Vi and Jinx. Arcane season 2 is in production to have a post-2022 release.

Fortiche produced it under the direction of Riot Games and distributed it through Netflix. The series was first launched in November 2021 and was first revealed at the League of Legends’ 10th-anniversary celebration in 2019. Riot Games and Netflix revealed that a second season was in development for a release after 2022 after the first season’s completion.

Critics praised the first season of Arcane for its animation, plot, worldbuilding, action scenes, characters, emotional impact, music, and voice acting. Some people have pointed out how popular the series is with both casual viewers who have never played League of Legends and with devoted players. Within a week of its debut, it also broke the previous record for Netflix’s highest-rated series, came in at number one on the Netflix Top 10 Chart in 52 countries, and came in at number two in the United States.

Arcane season 2 has not yet received an official release date. But since the show’s comeback was announced after the season 1 finale, we know it’s coming. It’s fortunate Arcane wasn’t impacted by Netflix’s recent wave of animated project cancellations. The teaser doesn’t reveal anything other than the fact that season 2 is being produced and that three characters from season 1 will return (more on this later). Nevertheless, we’re excited about Arcane’s second appearance.

But when will it be added to Netflix again? That’s difficult to say at the moment because we don’t know how far along season 2 is. However, Riot Games CEO Nicolo Laurent tweeted that the upcoming instalment in the series won’t be ready for the following year, so don’t plan on it arriving in 2022. So, anticipate the release of Arcane season 2 somewhere in 2023. Fortiche Productions just advertised a position for new FX3D artists for season 2, thus season 2 development is also still in its early phases.

Also, don’t anticipate things to move more quickly after Riot Games bought a non-controlling stake in Fortiche. Even if the change will enable the two businesses to collaborate more closely, “Arcane has been a major collaborator throughout the development of the programme,” they’ll still need to take their time to make sure every aspect of season 2’s production is as top-notch as it can be.

What is expected to Happen In Season 2 Of Arcane?

Right now, Arcane season 2 seems a long way off. The critically acclaimed Netflix series will eventually make a comeback to our screens after becoming a huge hit with the service’s subscribers. Sadly, it can take some time before it does. How so? Well, the second season of Arcane won’t be available until 2023. Even then, it’s likely that the second episode of the animated series won’t begin production until the following year, delaying its release until the end of 2023 or the beginning of 2024. There are then many dejected faces.

Even still, there is a tonne of Arcane season 2 news that will occupy fans until the show’s episodes are formally made available on Netflix. According to Variety, Riot Games and Fortiche’s League of Legends TV series have received nine additional honours for the 2022 awards season, with Arcane’s first season taking home nine of those awards. Given how great Arcane season 1 was, the show and the production companies behind it are more than deserving of those honours.

The core cast of the Arcane series is as follows:

The following season one voice cast member are expected to return for the second season:

Fans are speculating that there might be an intriguing new addition to the series in the meantime after seeing a teaser from Arcane’s crew. The most significant portion of the teaser is at the very end; Arcane fans are convinced they can hear the mechanical heartbeat of League of Legends champion Warwick, a part werewolf, a part machine who has no memory of his life before being experimented on by scientist Singed’s lab. The teaser contains no new scenes, just some dialogue. If Warwick were to be included in season two, there is no word yet on who would voice him, but stay tuned for news.

The Talks On Social Media About Arcane Season 2

Arcane season 2 please drop already and bring Jinx back. I want her back and will do everything. After the success of Arcane season 1, the fans are eagerly awaiting the show’s second season. Arcane feels like an incredibly intense fever dream right now, and I really need a second fix, so I hope we hear something about Season 2 soon.

Some Arcane fans have just finished watching season 1 and are eagerly anticipating season 2 as they tweet. When will season 2 of Arcane be released, they ask?

What Do We Expect In Arcane Season 2?

There were several plot lines left unexplored in the season one finale, which was undoubtedly explosive.

Since Silco has been killed, Zaun is without a leader, and it is unclear who could assume that position. Given that Vi is the adoptive daughter of Zaun’s late leader, Vander, and that Jinx, a potential candidate, is out of control, she might have to take the lead. At the end of the episode, Jinx created a major issue when she pointed a rocket launcher at the Council building while those inside were voting to enact a bill giving Zaun independence. Her enraged action might spark a conflict between Piltover and Zaun, and it’s unclear whether any people survived the explosion to establish that the vote for independence had actually been successful.

It’s also unlikely that Jinx and her sister Vi will be reunited any time soon. Vi initially desired to mend her relationship with Jinx, but it may be difficult to go past seeing your sibling fire a rocket at a crowded building.

For upcoming seasons, Reed Shannon has several plot objectives (via CBR). “Seeing Ekko and Mel interact would be fantastic. That’d be insane… The fact that race isn’t a topic of conversation between the characters in Arcane intrigued me because of the disparity in poverty and the differences between the top city and the Undercity.

Overall, anticipate a, um, wild second season. Kevin Alejandro, who plays Jayce in Arcane, asserts that viewers will be “on the edge of their seats” and says, “You’re going to be conflicted in such a way that I don’t know if it’s good or terrible. Like, your feelings will be ripped from you, and you’ll say, “Oh my goodness!” You will conclude [season 2] in that manner. It’s wonderful!

Netflix has not yet confirmed the number of episodes for the second season. Still, it’s possible that we may expect a similar release schedule to the first season, which saw a total of nine episodes published between November 6 and November 20 in three-episode batches.

It was planned to debut simultaneously on Netflix and China’s Tencent Video on November 6, 2021, with the nine-part series being broadcast in three-episode “acts” every week for three weeks.

Arcane Season 2 Trailer out yet?

It will be some time before any fresh footage from the second season becomes accessible because work on it has just begun. A trailer is anticipated for late 2022, hopefully, after the premiere date for season two has been determined. At least we have the season one trailer in the interim. Netflix released a brief trailer along with the news that Arcane will be back for a second season, but it is primarily a teaser and doesn’t contain any brand-new material.

A film titled The Woman King made its premiere at the Toronto International Film Festival which took place earlier this month on the 9th of September. The film is going to revolve around the all-female unit of warriors that...