Vinland Saga Season 2 Confirmed or not? Expected Release Date, Where To Watch, And More 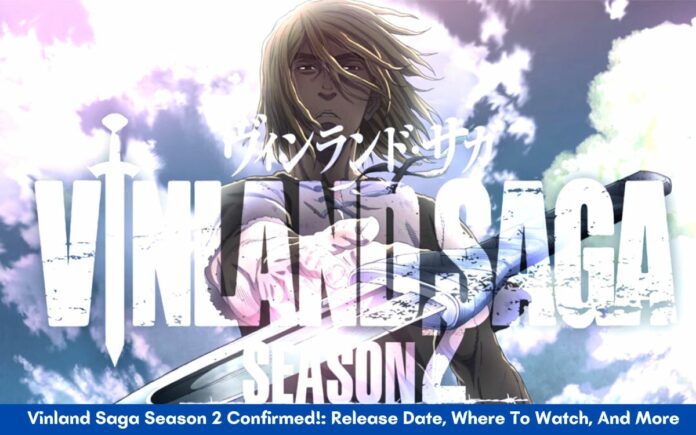 Vinland Saga is the anime adaptation of the historical Japanese manga series. The show introduces us to the Viking world. The series is written by Makoto Yukimura. The show revolves around Thorfinn who is the son of one of the Vikings’ greatest warriors. Thorfinn’s father is killed in battle by the mercenary leader Askeladd. This incident fills Thorfinn with bitterness and he wishes to seek revenge.

He joins Askeladd’s band, hoping to challenge him to a duel, and eventually ends up being stuck in the middle of a war in England. The war between England and the Danes worsens as the years pass by. Growing up, Thorfinn listened to the stories of old sailors that had traveled the ocean and reached Vinland, a legendary place.

Vinland was described as a warm place with fertile land where there was no fighting unlike the cold village in Iceland, where Thorfinn was born, and certainly not like his current life as a mercenary amidst war. War was his home now. It seems that the only paradise for the Vikings is the era of war and the death that rages with it.

Amidst all the chaos, Thorfinn must kill the man who murdered his father and take his revenge. Season 1 ends in a cliffhanger and Askeladd is killed leaving Thorfinn lost.

It is officially confirmed that Vinland Saga is renewed for season 2 and is currently under development. Season 2 was confirmed almost two years after the first season ended. Season 1 of Vinland Saga ended on December 29, 2019, after a total of 24 episodes.

The Vinland Saga manga currently has 25 published volumes out of which season 1 adapted the first 54 chapters, covering the second half of volume 8 of the manga. Hence, there is more than enough material and content for Vinland Saga Season 2. Shūhei Yabuta remains the director and Takahiko Abiru is returning as the character designer.

The Vinland Saga Season 2 is in development and is set to be released in January 2023, the winter anime season. The fandom of the show is not as large but the show is popular and the fans nonetheless are pretty devoted hence the producers were slow but have confirmed the new season.

The list of characters with their voice actors is mentioned below

The staff includes Youko Ueda as the producer and Shuuhei Yabuta as the director. Shouji Hata is the sound director. The script/screenplay was written by Kenta Ihara and Kashiko Kimura is the editor along with others.

Yuto Uemura has confirmed to reprise his role as Thorfinn in Season 2 as the main character of the show. It is confirmed that Kensho Ono will return as Canute and Akio Ootsuka will be returning as Thorkill. A lot of new cast and characters have also been revealed.

Einar is going to be voiced by Shunsuke Takeuchi. A new character will be played by Mayumi Sako named Arnheid. Fuminori Komatsu will play Snake. Olmar will be voiced by Yuu Hayashi and Taiten Kusunoki will voice Thorgil.

It has also been confirmed that WIT Studio will not be handling the Vinland Saga Season 2 project, instead, Studio MAPPA will be producing the anime TV sequel.

A lot of hype building up around Vinland Saga season 2 and there are tons of things fans want to and don’t want to see. Twitter has the show trending with “ #VINLAND_SAGA” and the show’s Twitter handle is “@V_SAGA_ANIME”. The fans have high expectations from season 2 of Vinland saga due to the obvious success and captivating story of season 1.

Askeladd was a fan favorite and after his death, the talk is stirred around what Canute has planned. Fans can’t wait to continue the story of Thorfinn which followed a cliffhanger ending in the last season. Fans have expressed how impactful of a story it was for them and have put their trust in the show for its renewal of season 2.

Fans also took Twitter to ask about the episode amount. Fans are excited and are hoping to see the farmland arc get animated. They are waiting to see what the future holds for Thorfinn as he lost the motive of his life and is stripped of his desire for revenge.

The fans ask the creator to maintain the greatness of the show as the second season is announced. Social media is filled with people thanking Yukimura “sensei” for the great announcement and also expressing that they are extremely hyped for Season 2.

The trailer tells us that Season 2 will be different from season 1. Season 2 seems to be setting up more focus on the characters rather than the action.

What To Expect In Vinland Saga Season 2?

The manga readers and fans hope that the anime does the arc justice. The fans are also expecting more deaths as the death of a character gives the story a bit more realism. In season 1 of the Vinland saga, there were several deaths that left the fans awestruck, and this was because most of the time, they weren’t expecting that certain character to die. Having more deaths in Season 2 would sufficiently raise the stakes. More fights in the new season are also expected as there have been many great fights in season 1.

The fans are hoping that there won’t be any prolonged episodes. Fans don’t want the show to be dragged with unnecessary details. Vinland Saga is a seasonal anime and the avid watchers expect the show to be crisp and entertaining with as less fillers as possible keeping true to the original manga it has been adapted from.

The fans are anxious to find out what actually happens to Thorfinn and how he plans to manage things despite having lost his only goal. Thorfinn seems lost towards the end of the first season and fans want to know how he is going to cope with everything. watchers are excited to know what the future holds for Canute.

An official trailer has been released and the show is set to premiere in January 2023 but no list of episodes for season 2 has been updated. The first season consisted of 24 episodes that only covered half of the 8th volume of the Vinland Saga manga. Hence, season 2 will have enough material for episodes for their devoted fans to binge on.

All these fights had a great impact on the show and affected the series in a very positive way. Hence, the fans are looking forward to more action to keep them on the edge.