Joey Defrancesco, the munificent Jazz Organist, saxophonist, and trumpeter of America died on...
HomeEntertainmentThe Rehearsal: All...

The Rehearsal: All You Need To Know!! 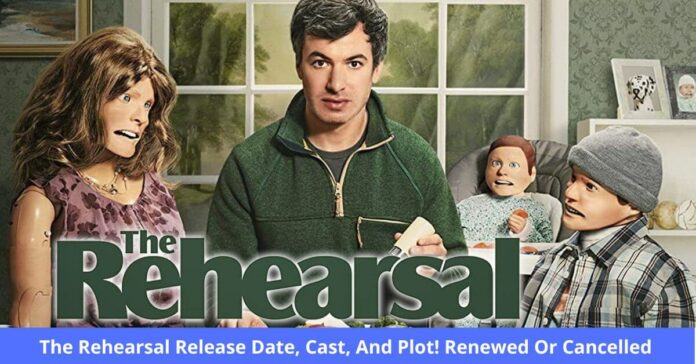 The Rehearsal is an American comedy web series based on social experiments for eliminating future mistakes by rehearsing them beforehand. ‘Why leave life to chance?’ is the tagline of the web series. Since the trailer of the show, the Rehearsal, is in the air, the fans of Nathan Fielder have gotten excited to watch his other epic and fascinating story. Nathan Fielder was critically acclaimed for his last series, Nathan for you. He received so much love and praise for his best-played role and storyline.

Now again, he has created such fascinating artwork, which has left people dumbfounded. The trailer of ‘The Rehearsal’ is out on HBO and HBO max since July 6, 2022. On July 15, 2022, the first episode of the series was aired. The wait was finally over, the series was aired a day long.

The Rehearsal is a comedy series and consists of 6 episodes. You can watch ‘The Rehearsal’ from July 15 Friday on HBO and HBO max.

As mentioned above, you can watch the premiered episodes of The Rehearsal that was aired on Friday, July 15, 2022. The series comprises 6 episodes, each full of enthusiasm, comedy, and suspense. The web series is a social experiment that revolves around the question, Why leave life to chance?

Nathan fielder wants to show how accurately we can differentiate between reality and stage if we rehearse the expected events before them occurring in nature. You can better perform if you rehearse in advance for the most anticipated life events.

This is how you are preparing yourself for the future. People who write the scripts or jot down the key points before dating someone or performing on the stage can better relate to the series, The Rehearsal. All along with watching the show, you will realize that Nathan Fielder has crafted the film only for you. Mentioning again, the show was aired on Friday 15 July.

Where Can You Watch

Nathan Fielder is a Canadian actor and director who has been critically acclaimed for his preceding movie central series, Nathan for you. It was also a comedy series that gained a reputation worldwide. In Nathan for you, he used his degree to help the small-town business grow with experimental tools, and with his social, experimenting, and scientific mind, he has created.

The Rehearsal is to play the future in advance to avoid mistakes. You can watch this legendary and fascinating series on HBO and HBO max.

After 5 years of the release of the movie central series Nathan for you, Nathan in July 2022 cast himself and various known actors in the comedy-drama series, The Rehearsal. Along with writing and directing the series, he is acting as well. Moreover, in the web series you will see;

The Rehearsal is an American comedy series that aired this Friday. It is the work of Nathan Fielder and Chase Yi who plays the role of Mike, Jay Dobyns, who is himself in the play, and Andrea M. Anderson. These people are the main cast in the making of The Rehearsal.

Whereas, Nathan Fielder has played many roles, In casting himself and screenwriting the series, and directing the show.

The trailer starts with Nathan Fielder saying, ”I’ve been told my personality can make people uncomfortable. But I’ve learned that if you plan for every variable, a happy outcome doesn’t have to be left to chance.”

In the trailer, Nathan meets different people and explains how their life can go better if they rehearse the most anticipated moments that have to come in the future. He explains how you can eliminate future uncertainties by practicing them today. And the trailer goes in a way that he explains how to raise your kids so they may not face the scenarios you have faced because you did not practice them in advance. By anticipating and practicing the future, you can reduce the stress and anxieties that have to come with them.

In the trailer, he has shown himself talking to various people and graphing how he has changed his life by practicing tomorrow, and today. The trailer is funny and takes the philosophical aspects along to keep the tagline ‘why to leave life to chance’ highlighted. Nathan is a Great American comedian who has worldwide acclaim for his comedy and style. And his comedic picture is again visible in his 2022 series The Rehearsal.

In the trailer, as we have discussed above, he has shown people experimentally how his life changed and how they can also acquire this change by practicing the future beforehand.

In contrast, he has given opportunities to people to practice and rehearse the tomorrow and the interview. He has allowed people and given them space to eliminate the future anticipated uncertainties by rehearsing their reactions for the time when they occur in life. This is how they will be able to reduce the amount of stress they may get because of the uncertain future.

He has taught people to leave life to chance but live the future today considering them real.

In the trailer, Nathan has talked to various people about life hacks and how to prepare for them. In simple words, he has experimentally shown people how to write scripts for upcoming future events and has shown the power of rehearsing tomorrow.

The Rehearsal is an epic, and fascinating series everyone will enjoy watching.