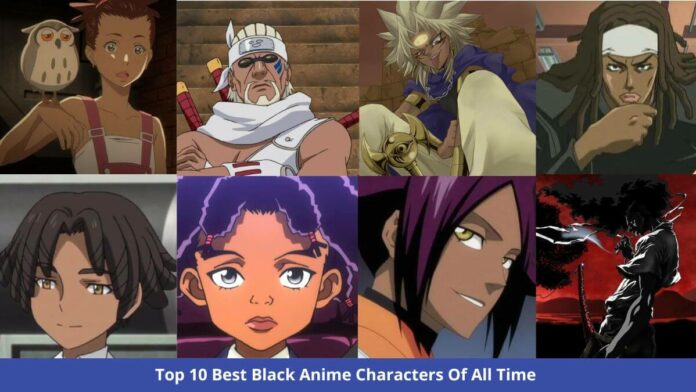 Keeping aside the stereotypic approach to black anime characters, there are still a number of notable best black characters in anime that have swooned the traditional take on them. The marginalized presence of these characters has recently crossed the imaginary lines drawn by the sketchers who labeled the symbols to depict only negative roles so far. There have been some amazing title roles carried forward by black characters, and indeed, they have also been victorious in marking their identity in the viewer’s expansive minds.

Who Is The Best Black Anime Character?

When carefully observed, it was possible to point out the most iconic and legendary Top 10 Best Black Anime Characters who have been so influential as such that their roles are even remembered after decades. Within the boundaries of having no life for the characters to perform the roles, the ideologies have been portrayed efficiently with the cameo roles. Take a look!

Michigan, one of the main leading black anime characters of the series, turns out to be a criminal with age. Her appearance is quite similar to that of the R&B star Aaliyah, and she is so far the best female anime characters protagonist of the anime series. Michigan’s childhood is a mystery, with only a glimpse of her being an orphan with a drained past revealed.

She runs away from the dungeon to save Hana, her ex-lover, Hiroshi Morenos’ daughter.

Michiko manages to escape with her, whom she considers her own daughter, out of her endless love for Hiroshi.

The black anime characters are clever and beautiful at the same time, which is the deadliest combo ever, and with no playful drama, Michiko attains her goals one after the other.

Chiaki Konoike’s boyfriend, Bob Makihara, is a character in the series Tenjou Tenge, in which the character is referred to as the foreigner as he arrived from South Africa. He, along with his elementary school pal, Souichiro Nagi, gets inside of Toudou only to become defeated by the kids of the school.

The established character of Bob gained much popularity at the time, though he remained at the back, with not much purpose to his character. His capoeira skills and incredible strength made the character, Bob, stand out from the other major ones.

Claudia Lasalle is the best black anime character that appeared in both Do You Remember Love and Flashback 2012 of the television series The Super Dimension Fortress Macross in the 80s. It is therefore no wonder that many fans are unaware of the iconic anime character, Claudia. Although Claudia is not the main lead of the series, she is responsible for the smooth running of the background happenings of the war with the aliens.

Killer B is famous among all black anime characters, and of course, who wouldn’t like the character? He is the Shinobi of Eight Tales, who befriended the beast. B, despite being asked to protect the village, chose to be a rapper instead.

Being the best ninja character, B exhibits things in a very unique and stylish way that suits the hero he is one of the best looking anime characters. Although he is a Jinjuriki, B was so confident, proud, and cocky about himself and his power. B comes only second to Naruto Uzumaki in terms of his overconfidence, most probably.

The founder of Rare Hunters, Marik Ishtar, was the main rival of the Battle City arc. Odion’s defeat marked the entry of Yami Marik, the split-personality of Marik Ishtar, who then reigned as the major antagonist of the animation series. Yami had taken control of their body and mind of Marik, which later Marik took back from his mutation.

Dark-skinned Marik usually wore purple attire with three bands on the neck and a pair of golden earrings. Being a kid, Marik was very curious to know about the outer world and used to sneak out when he had no permission to do so. However, he turned out to be the rage villain who was deadlier than Pegasus.

Just like the name suggests, Carole is one of the main black anime characters in Carole & Tuesday, who was born on earth but lived on Mars. Carole is a quick-witted, genuine person who, with the qualities of her straightforwardness, could not remain constant with any of the part-time jobs she has taken so far.

The young orphan girl, who was all alone from a very young age, knows how to deal with delegated situations without depending on anyone. She is all into music and finds her music partner, Tuesday, who, from her first song, realized that the girl was feeling all alone. However, the girl was unpolished and strong by birth.

With famous parents, Nils manages to surpass them in earning three doctorates in philosophy and portrays the character of a cheat code, who is only 13 when the show begins. With the help of his Astray Gundam, created out of his intelligence, he shows the limits of both Sei and Reiji, and upon the defeat of Nils, they ushered him into the joy of Gunpla. Before that, he was never into gunpla battles, for Nils was only interested in science.

With only the slightest appearance in the animated series, Hunter X Hunter, the protagonist is Gon Freecss, who is trying to be an accomplished hunter like his hunter father. Gon was efficient enough to execute the hunter’s license. However, Canary is no less savage than Gon. Despite being a servant to the Zoldycks, the family of the assassins, she degrades Gon with so much confidence and self-esteem.

Last but not least, Canary is kind and sweet to Killua, the heir of the Zoldyck family, and the character has gained much appreciation and respect over the years.

The famous Yoruichi is One Of The best anime characters female, the girl who was the first woman to lead the dynasty. Being one of the members of the Noble families of Soul, crossing the challenges, she managed to become the captain in the Gotei 13. No matter whether the character is old as the hills or not, dealing with that limitation, Yoruichi is one of the best black anime characters today. The Flash Goddess can never be replaced by any other anime character, even if they improve with time. No henchman can ever be equal to the girl here.

The second-best swordsman of the best black anime characters of all time, denoted by the headband he wore, is the character formulated from the master brain of Takashi Okazaki, played by the actor, Sam Jackson, who stays still with no more possible alteration to the character. It was such a worthy gift from the manga artist that he presented a strong culture of hip-hop as well through the character he created. The anime is all about slick fight scenes that allege Afro Samurai is constantly fighting to maintain the position that will enable him to wear the particular band, usually seen on his forehead.

Who All Are The Top 30 Cute Anime Boys Of All Time?