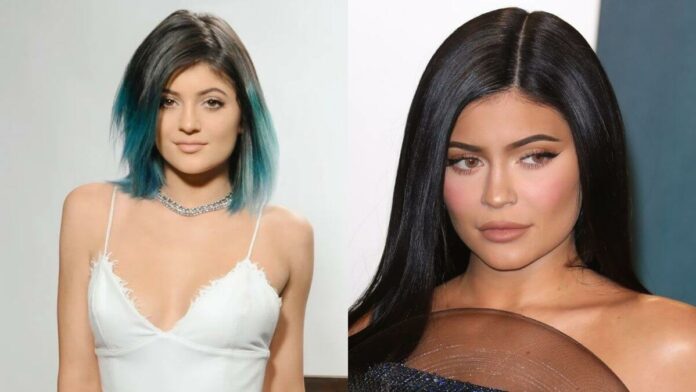 Kylie Jenner, one of the most influential teens according to the source in 2014 and 2015, embarked on her gorgeous self, following the path of her model mogul sister, Kim Kardashian. We have been seeing her since her childhood and it is hard to say if she has undergone any surgeries or not. However, in this post, we have gathered as much information as possible on her transformations over the years.

The wonder left behind by the founder of Kylie Cosmetics is enormous. Her captivating features attracted 310 million followers on her official Instagram handle, and the tycoon positioned herself as the second most followed Instagram personality, after Cristiano Ronaldo, with a difference of 154 million followers.

The 24-year-old young businesswoman, being practically influential to the coming generation, is growing expansively with no sign of quitting any of her major fields.  Yet, the mother of two has been faced with many fingers raised upon her which ask whether the secret potion behind her glorious success is completely relying on the number of plastic surgeries she underwent or not.

The diva has been speculated to have changed herself from tip to toe, by completely getting a makeover done, which according to her critics is one of the major reasons for her unbeatable victory.

In the American reality family show, Keeping up with the Kardashians, the girl, who was only 10, invited the attention way beyond imaginable and shared her most private stories with the audience.

The viewers have been keeping up with Kylie Jenner ever since she was 10, and are clearly familiar with her visible changes, despite her claiming that she has only undergone lip filler so far.

Ever since “Kylie Jenner plastic surgery” was the most searched on the internet, which clearly shows the results of her before and after pictures, focusing particularly on each of her facial and other body features.

The superstar on one of the episodes of Life Of Kylie shared the traumatic experience that led her to a lip injection that would in no time give her fuller and plump lips.

She said that her boyfriend at the time judged her when she was only 15, saying that a girl like her, who has the thinnest of lips, can never be a good kisser, which ultimately dropped her confidence.

Kylie Jenner was confronted with the truth revealing her lip secret as she used to overline her thin lips just to make an illusion of bigger lips and ended up realizing that overlining alone would not solve her problem and got herself a lip filler.

Though the baron did not approve, certain surgeons revealed, looking at the changes in her facial physiognomy, that she must have definitely put a slight touch on her nose and chin, for they have been noticeably smaller than before.

To keep the face in shape, she is said to have a cheek filler, which aids her cheeks to pull themselves upward by projecting it upward, coupled with a V-lined chin.

Not only the media personality have artificially changed her face, but she has apparently gained an hourglass figure, which is probably the result of a few other contrived magic touches here and there.

These rumors were replied to by the Kardashian herself by pointing out the 15-pound weight gain she had over time and effortlessly denying the tittle-tattle around her transformation.

However, experts have come up with a conclusion that Kylie must have already done a Brazilian Butt Lift paired with breast implants, which is more believable than her farfetched lies.