The much-awaited volume 2 of Stranger Things Season 4 is releasing today on...
HomeEntertainmentThor: Love And... 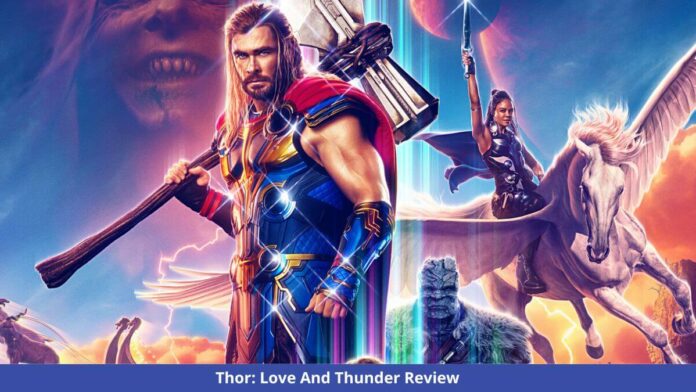 Far from the Marvel conceptions, the $250 million budgeted movie seemingly has failed to impress the audience. They surely have swooned and drooled over the extra appealing structure of Chris Hemsworth, however, the movie is an utter mess.

Doing the movie does not seem to be a good decision for Taika Waititi, for the New Zealand actor has not succeeded in impressing the audience this time. The filmmaker fitted himself into a very unfashionable character, Korg. The movie is reported to lack any audience engagement and thrilling factors as the roles are enacted by the same characters. The fourth installment does not seem to have reached up to the expectation of Thor fans

The Avenger crosses paths with his ex, Dr. Jane Foster who has turned herself into the Mighty Thor, who is so much against all the monsters. That is when the Gorr arrives to diminish all the Gods and changes the whole plot. Teaming up of the exes was a game-changing moment in the whole film, where they also returned to some of their old friends, Korg and King Valkyrie.

The trailers gave a glimpse of the couple cherishing their spark again, however, the chilly breakup reconciliation had no specific spark to deal with. The couple only seemed to have shared quite flirty lines with each other, which disappointed the fans who were anticipating some good connection between them. The emotional breakup that forced the fans to shed a few drops of tears on their names looked wasted after the release of the movie since they themselves do not seem to have the strongest desire for one another.

Will Jane And Thor Get Back Together In Thor Love And Thunder?

Most probably, the story has been written in such a way that Jane and Thor are not meant to collide with each other, but they have got similar goals to achieve. Just like any other Waititi movie, the lead has not disappointed in the image of a charming hero and that is the one and only point that is in favor of the movie.

However, fans could see Chris Hemsworth with a totally different idea, where he is taking his character on a long journey in which inner peace is the destination that he is looking for. This is quite a diverse thought from the former characters of Thor. very intelligently his retirement is interrupted by Gorr, whose only intention is to destroy the Gods. For this ultimate reason, Thor is left with no other choice than to seek help from his ex-girlfriend and his friends. After a number of fights and disputes, they seem to manage the deteriorating situation by utilizing their unique power to the maximum enabling the friends and ex-couple to obliterate the Gods from Gorr, the God Butcher, before he establishes and succeeds in his mission.

With the eyes that rage over divinity, Gorr has his own reasons to go against the Gods. he felt like all of his prayers are going in vain, as none of the Gods were answering to it, and realized that the planet on which he and his family was living was nothing like any other planet that was from time to time monitored by the Gods. in the prologue of the movie, Gorr was seen cradling his daughter who was fighting with her death. That was the moment he took an oath to beat the Gods and like any other villain, the motive was however emotional.

The movie was stuffed with a whole lot of fight sequences and the makers have managed to fit in certain good moments of Jane and Thor, in between the chaos of introducing the new MCU. Waititi did not forget to add the magic touch to the visuals as the whole imagery was a pictorial treat to the eyeballs at the premiere. Keeping the script aside, the actors did a good job when individually considered and Chris Hemsworth could forever amaze the fans with the same character of Thor, for even 10 times again in future that he will be forever cherished to play the role any time. The other characters have also done their best. Although the film from the beginning itself was a mess,  the climax fighting scene when added to it, doubled the rating of the movie.

Is Thor: Love And Thunder Worth Watching?

The question is raised to the writers of the script that they literally failed to impress the audience whom they have once already engraved with the preceding installation of the Thor with the appropriate amount of intelligence, humor, fight sequence, and romance.

However, the screen is often shared by Thor, Jane, and Gorr, by marginalizing the friends, Korg and Valkyrie. Many fans have shared their opinion on how the movie tried to include many comic scenes, which ruined the whole impression of the movie.

Though viewers have primarily supported the MCU introduced by Thor, the Loki, however, they have not followed the same path as they are not so well appreciating the new MCU. Gorr does not seem to have gained as much attention from the viewers, as how the old MCUs did.

Thor: Love And Thunder have portrayed gods in a very unfamiliar villainous way, which is counted as one of the flaws made by the team.

Natalie Portman is appearing as Jane and the character Ghorr is portrayed by Christian Bale, who did a hell of a performance. The movie has a number of experienced and non-experienced actors and crew members, who were only focusing on themselves but not all of the movies it seems. The Marvel Studios’ Thor was splendid with the casting that include Tessa Thompson, Russel Crowe, Melissa McCarthy, Chris Pratt, Karen Gillan, Jamie Alexander, Matt Damon, Luke Hemsworth, Cate Blanchett, Sam Neil, Pom Klemnetieff, Vin Diesel, Anatomy Hopkins, Jeff Goldblum, Simon Russel, Ben Falcon, Dave Bautista, Sean Gunn, Akosia Sabet, Mark Ruffalo, Lena Headey, Peter Dinklage, apart from Chris Hemsworth, Natalie Portman, Christain Bale, and Taika Waititi.

The Walt Disney Pictures movie has somewhere lost its essence this time as it could not evoke the audience as expected. It is observed that the audience kept unrealistic anticipation of the latest movie by Taika Waitiiti from what they saw in his last, “Thor: Ragnarok”. Thor: Love And Thunder was the fourth installation of the God of Thunder, which is right now judged to have not reached that far, but fell to the ground with its first show itself.

From the audience reports, the majority of them are not willing to come for the second show or would ever be interested in watching it once again, as the movie has disappointed them such that they are losing their interest in the Thor franchise this time.