Joey Defrancesco, the munificent Jazz Organist, saxophonist, and trumpeter of America died on...
HomecelebrityThe 20 Most... 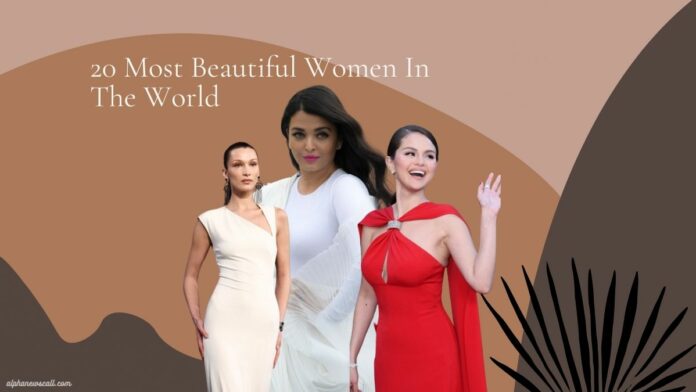 Beauty is a wide term encompassing several factors, including looks, appearances, nature, and inner beauty. When a person is pure from the inside, they are truly beautiful.

Here, based on some of these traits, we have accumulated the names of the 20 Most Beautiful Women in this world.

Who Are The 20 Most Beautiful Women In The World?

We bet you cannot just ignore the glamor, beauty, and appealing looks of these 20 extraordinary ladies. Take a glance today.

The 24-year-old Bella Hadid is 5 feet 9 inches tall and a famous model from Washington. The Golden Ratio of Beauty considered this epitome of beauty, the most beautiful woman in the world.

The Indian gorgeous lady, Deepika Padukone, is now an internationally renowned personality for her incredible movies in both Bollywood and Hollywood. The Padmavaat star is also the founder of a center dealing with healing mental disorders.

The 1975-born outstanding actress belongs to Los Angeles, America. The stunning filmmaker and actor is the receiver of several accolades, including an Oscar. Moreover, the 5’7″ tall lady is also famous for her humanitarian activities.

Like the name, this marvelous actress is also lively by her nature. The 1987-born American beauty is the winner of the Teen Choice Award and People’s Choice Award.

Being one of the exceptional beauties of Hollywood, Taylor Swift has a melodious voice too. Moreover, the mesmerizing lady was the first Woman of the Decade as per the Billboards.

The Indian beauty queen Aishwarya Rai Bachchan started her journey into the film industry after winning the title of Miss World in 1994. The girl with green eyes is known in many movies in different Indian languages.

Presently, the name of Priyanka Chopra is among the highest-paid actresses in the world. The beauty from India is now married to the famous singer Nick Jonas and happily giving remarkable performances in Hollywood, besides Indian films.

Emma Watson became the favorite of the global audience with her appearance in all the Harry Potter movies. The cute little girl is set to attract men with her incredible sexy looks and charm.

Christiana is an American actress and the Screen Actors Guild award winner. Moreover, coming from Tennessee, this lady is also a famous model and producer.

The Transformers actress set a new level of acting after her extraordinary performances in all the series’ movies. Born in 1986, this stunning and talented personality got the Teen Choice Awards thrice.

In the world music industry, Shakira is a very popular name indeed. The Grammy award winner also worked in some TV shows and films. Her Waka-Waka song for the FIFA World Cup in South Africa instantly made everyone dance to the song.

The actress from America received several awards for giving wonderful performances in some top-rated movies like Hustlers, Enough, etc. J.Lo sang multiple songs also and was even a preferable artist for the marvelous dancing.

The incredibly gorgeous beauty queen is from Jerusalem, Israel. Her remarkable movies include Star Wars, Black Swan, etc. Black Swan even won an Oscar making the youngster a center of attraction for many.

The California artist is a businesswoman also, apart from being a producer and great actress. So, several awards like Golden Globe, Primetime Emmy, etc., went into her basket.

The Wonder Woman star won the crown of Miss Israel and did more than 30 movies. Moreover, the model and singer is also famous martial artist. That is an excellent combination of beauty and courage.

Beyonce Knowles took birth in Houston in 1981 and happens to be one of the most successful singers and musicians of all time. Likewise, Queen B, as her fans call her, got multiple nominations for the Grammys.

Emma Stone started her career as a child actress and gradually won the hearts of global viewers with her charm, skills, and appealing looks.

Born in New York’s Staten Island, Christina Aguilera performed in some classic movies such as The Voice and many others. She even won multiple awards and also made a name in the music industry.

This extraordinarily beautiful model comes from Israel. Furthermore, the 20-year-old managed to be the new name among the 100 most beautiful faces around the world.

The singer and actress Scarlett Johansson starred in several American movies, including Black Widow. She even bagged the BAFTA award and is doing great currently.