It seems as though Zawe Ashton and Tom Hiddleston are taking on a...
HomeGamingHollywood's Most Famous... 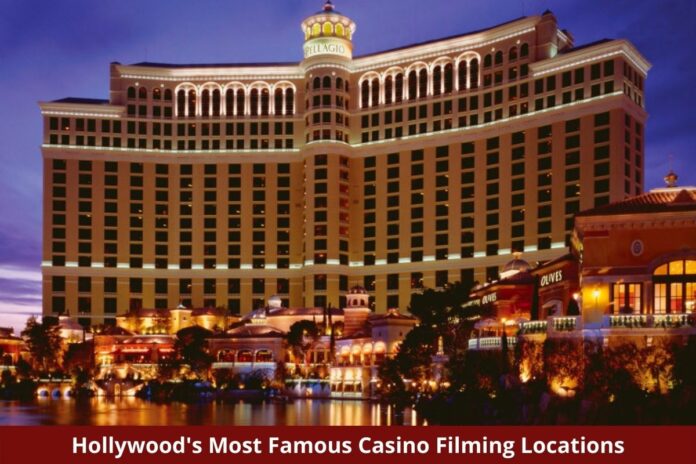 When it comes to movies, few locations offer as much glitz and glam as a casino. Casinos provide the perfect backdrop for various movie genres, from the well-known “Heist” theme to the wildly exciting “Spy” movies. Few filming locations convey the excitement, as well as the all-action casino. These locations let us share in the fun and excitement and, more often than not, the high life of the main character, living an over-the-top lifestyle around the roll of the dice, martinis, and shady casino bosses. Here are some of the most famous casino locations used in Hollywood:

The casino famous for its extravagant dancing fountain is featured in Ocean’s Eleven, probably one of the most famous heist movies out there. The star-studded cast included George Clooney, Brad Pitt, and Matt Damon, who pull off an impossible heist against the crooked casino owner who wronged them.

The Bellagio was constructed around an Italian theme, opened in 1998 with 3005 rooms and cost $1.6 billion. This casino features many poker rooms, a private VIP area, restaurants, nightclubs, and retail areas. Don’t forget the slots, many of which you would find online when you login at Rainbow Spins casino. The Bellagio is truly one of the greatest casinos ever built, and a must-see when visiting Las Vegas.

The wolfpack from The Hangover visited Caesars Palace for their friend’s bachelor party. However, that is just one movie in a long list of films that were shot at this iconic location. To date, over fifty movies have been filmed using Caesars Palace as a backdrop. Movies such as Iron Man, Godzilla, Rain Man and Rocky 3 all feature this beautiful location.

The construction of Caesars Palace started as far back as 1962 and it opened in 1966. This hotel has eighteen fountains that consume 240 million gallons a year and a 20 feet high statue of Caesar greeting guests in the driveway. Amenities for this casino include restaurants, bars, a mall and a sports arena in conjunction with the many games and slots.

It was built in 1962 and operated under this name until 1997. It underwent a rebranding and in 2007 rebranded again as Planet Hollywood Casino. Amenities for this popular casino include the action-packed casino, a mezzanine, swimming pool and the Zappos theatre. We should note that while many movies are filmed here, there are strict laws in place for filming at any casino venue, and permits are required. There are plenty of places outside the casino floor where you can take photos or video images.

The Mirage Hotel and Casino

This hotel with 3049 rooms was among some of the largest casinos in the world when it opened in 1989. This opulent casino site has featured in movies such as The Wolf of Wall Street, Indecent Proposal, and Sgt. Bilko. Other than movies, The Mirage also features some games such as Grand Theft Auto, Need for Speed and Hitman.

When it comes to attractions, The Mirage took the rulebook and threw it out the window. This casino features an artificial volcano attraction at the front of the resort that erupts each night. Besides the volcano, guests can enjoy animal habitats with dolphins and tigers as the main attraction.

The Park MGM, formerly known as the Monte Carlo Resort and Casino, was converted between 2016 and 2018. This casino feature 2,992 rooms, of which 259 are luxury suites and a boutique hotel NoMad Las Vegas occupies the upper floors. Popular movies shot in this casino include Get Carter, with Sylvester Stallone and Mickey Rourke, What Happens in Vegas, starring Cameron Diaz and Ashton Kutcher and Dodgeball: A True Underdog Story with Ben Stiller in the leading role.

Other than movies, the X-files filmed an episode at this location. Amenities for the Park MGM include the Dolby Live theatre, which has residencies such as Cher, Ricky Martin as well as Lady Gaga. Currently, the Park MGM resort is the only casino on the Las Vegas strip that offers smoke-free gambling.

When visiting Las Vegas, these casinos are a must-visit, especially if you are a movie buff. You can walk to where your favourite movie was filmed in some of the grandest casinos in the world. These locations will forever be part of Hollywood history and are sure to feature in many movies still to come.