Tyler Perry Recalls Will Smith After Oscars Slap And Says: ‘He Couldn’t Believe He Did It 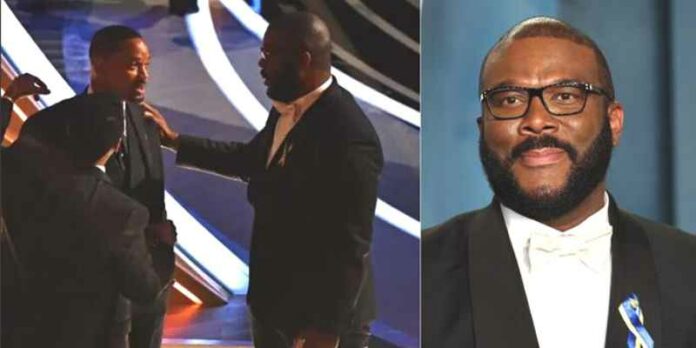 The Slap incident at the Oscars by one of the greatest artists of all time actually shook the world. After a long silence, finally, Tyler Perry opened his mouth on this topic. He said that Will Smith is really feeling very bad after the event. Moreover, the famous actor could not believe his own eyes when he saw the news the next day.

Smith was like how could he do such insane behavior publicly? It was indeed a very shameful act on the part of a remarkable artist like Will Smith to Slap somebody on the stage of the Oscars.

On being asked, Perry made this point clear in front of the global audience. If you are also interested in learning what he said to the media, please check out the amazing article only here.

The Infamous Slap Is Still In The Headlines: Tyler Perry Says He Never Comfort Will Smit After Infamous Oscar Slap

After so many days after The Slap incident at the Oscars, the news is still a hot topic. However, on this subject, the famous actor Tyler Perry made some shocking remarks. In the latest interview, Perry explained their present condition of Will and how he must be feeling right now after suffering from a ban from the Oscars.

Chris cracked some joke addressing Will’s wife and this made the Oscar winner furious at once. He did not even think about the reputation and prestige of the stage and slapped the host very hard. It was a shocking disrespectful incident that no one favored. Moreover, immediately, Perry rushed to the victim to check whether he was okay or not.

The joke was a very simple one and related to the latest haircut of Jada Smith. But the ultimate situation did not end up so simply. It created chaos worldwide which forced the Oscar authorities to ban Smith for the time being.

The name Tyler Perry got involved in the matter as some cameras caught him having some conversation with Smith after the incident. Everyone was curious all these days about what they were talking about.

It has been three months and Tyler found it the right time to clarify the doubts of the global audience. He wrote on social media recently that he was in no mood to pacify a person like Will at the Oscars. However, the situation grew very intense and somebody needed to manage the complicated scenario.

To stop the further argument, he and Denzel Washington were taking a small initiative. But it seems now that the viewers received a totally wrong message from what the media captured.

Tyler confirmed that it was very hard for him to see Will involved with such a controversy. Moreover, their condition of Chris was also not normal. Hence, he couldn’t even understand how to tackle both of these close friends.

But, as a matter of fact, this time Smith was absolutely wrong. He never had the right to slap someone publicly, whatever the reason. There were no excuses to support such an act of Will. Moreover, Perry could not understand what made him do such a drastic act.

As per Perry’s opinion, after the incident, he has seen Smith break down completely. Life became devastated with so many negative comments coming from all sides. Every person present in the room was shocked after Will slapped Chris. However, it was very commendable on the part of Chris to handle the whole scenario intelligently.

Presently, Smith is in a terrific situation and he now cannot believe that what he did was true. It is every actor’s dream to hold the Oscar award in his hand. So, getting such a remarkable honor was something Smith waited for so long. It was his night and one silly behavior spoiled everything. Even after receiving the award, Will got a ban for a decade to participate in the Academy Awards ceremony.

A Fall from Grace star has observed the pain in the eyes of his dear friend Will. It is clear now how he is paying for his mistakes and repenting a lot. Adding further, the actor stated that Smith could not make out now what made him do such a heinous act on the stage.

Perry also shared his reactions to the plot in Will’s recent book. It has an incident where the little boy cried incessantly for being unable to save his mom. It shows the inner turmoil of Smith after getting banned from Oscar. Digesting such trauma is definitely not very easy for a person like him. To date, he spends his days thinking about the real reason for acting vigorously on a public platform.

Although the highly talented actor is going to launch his new movie, the past incident is not leaving him. Tyler seems to be very concerned and tense about the well-being of his friend. He knows almost everything about this man and hence shared with the public how the situation may turn worse if nothing is done to pacify him at the moment.