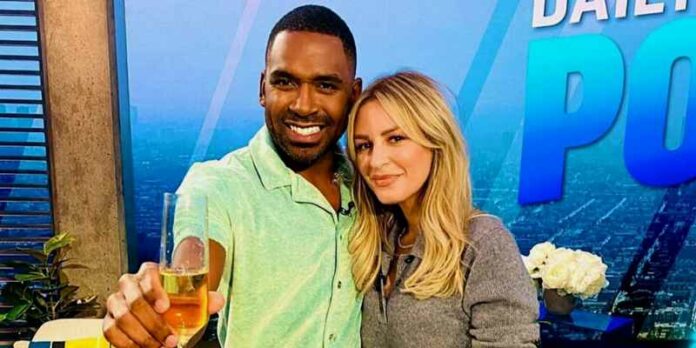 E! News Daily Pop had a special announcement from Morgan Stewart on 13th June. After the long maternity leave, Stewart is all set to make a comeback in style. However, she wants to bid farewell to the journey of Daily Pop. Currently, her focus will be on the Nightly Pop of E!

The famous E! personalities came in contact with Stewart after a long time. However, they received sweet yet saddening news from the favorite star of many. Do you have any idea what she said? We are going to reveal it now in this article. Please continue reading it with full attention and do not miss out on anything.

Morgan Steward met Loni Love and Justin Sylvester from the E! News channel post-maternity period. However, this time, along with the laughter, she had some bitter news too. In the last interview on the Daily Pop, she revealed that the episode was the last for Stewart. She was planning to leave the Dail Pop of E!.

Furthermore, she also clarified that such a decision was not very easy to make for her. The show is definitely very close to Stewart and the connection with it is so old. But in life, everyone has to make decisions depending on the suitability of the circumstances.

Stewart finally returned to the show after long maternity leave. But now the new mother is too excited to spend the beautiful mornings with her cute bundles of joys. Recently, on 17th February, Morgan gave birth to her second child.

It is a baby boy and Jordan, the husband of Stewart, is also quite excited about this new extension of the family. It has been only 15 months since the little Row Renggli McGraw has come into their life. Now, this pretty girl will also have a brother to play with.

Of course, as a responsible mother, Morgan does not want to miss the cute activities of her children. Hence, she has taken the decision to enjoy some break time by bidding adieu to E!’s Daily Pop.

Messages For The Fans

Morgan Stewart has been a fabulous host for quite a long time. Her charm and attractive looks stole the attention of hundreds of viewers of the E! Channel. Hence, the fans of the show will definitely miss Morgan Stewart in the morning. Daily Pop used to come in the morning making the beginning of the day brighter for the viewers. However, the channel will surely arrange for a new host on his occasion as Morgan leaves it permanently.

While shooting for the last episode, Stewart showed her gratitude and overwhelmingness to the lovely audience that she possessed for so long. Moreover, she also declared that leaving Daily Pop did not mean that people would not be able to catch her on the channel. She will undoubtedly continue to do Nightly Pop.

So, this piece of news will certainly make the fans forget some tensions and sadness. It has been more than a year since the audience was missing the actress. But they were really excited after hearing the amazing news that Stewart is now the mother of a baby boy also.

It is essential for a mother to give quality time to her kids too. As a result, leaving one show is certainly a good decision on the part of the renowned celebrity. Many people expressed their sadness on social media and told how they would be missing Morgan. However, at the same time, they also showed their concern about the host and her family and wrote that this decision would definitely be favorable for her kids.

Appreciation For The Viewers

Stewart and her husband received millions of messages and congratulations on social media and through gifts and cards from so many fans all over the globe. She has gone emotional also after observing so much love from people. It was indeed a joyful and remarkable moment for the talented superstar.

As a token of appreciation, Morgan declared how many touches she and her family was after receiving the beautiful messages from the audience. Of course, she would be missing the show immensely after being its inseparable part for an elongated period, But life goes on and brings lots of changes also.

It has been 5 years since Morgan hosted the incredible Daily Pop show in the morning slot of E!. But now it is time to change the routine and give some more time to her children.

Before ending the last show, she also mentioned that Stewart has nurtured Daily Pop like her own baby. So, the success and failure of the show mattered a lot to her. Even after she would no longer be a part of it, Morgan will be in continuous touch about the performances of the show. Now, you can catch the incredible star at the night only, as she will be entertaining you in the Nightly Pop.