Joey Defrancesco, the munificent Jazz Organist, saxophonist, and trumpeter of America died on...
HomeEntertainmentMegan Fox And... 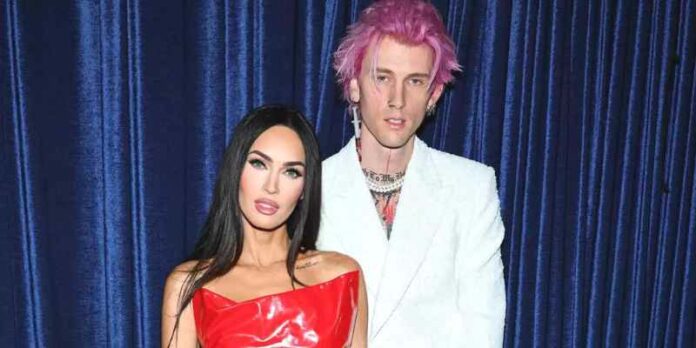 The Power Couple- Machine Gun Kelly and Megan Fox again became the center of attraction with their innovative styles. At the Tribeca Film Festival, they showed their magic on the Red Carpet. The occasion is the Taurus premiere. The color of Kelly’s hair is neon pink and its vibrance left a compelling effect on the spectators.

The couple wore fabulous color-coordinating outfits and looked ravishing throughout the premiere. Thursday brought a superb evening with the Red Carpet full of top-notch guests of Hollywood. Keep your eyes fixed on this content till the end and know better about the dress code of the couple.

When it is a Red Carpet of any show, the stars become highly conscious about their extraordinary outfit and gorgeous looks. It was true for Kelly and Megan Fox also this Thursday. The Passion Play actress did not disappoint her fans as she appeared on the Taurus Red Carpet in a marvelous gown.

The Pumps of Jimmy Choo Farley became a metallic bonanza for the red latex outfit. The Sportmax designer gown made the actress look exceptionally stunning.

To compliment her, Machine Gun Kelly, the outstanding musician of the movie Taurus, did not keep any card unturned while planning his outfit. The double-breasted suit had incredible embroideries and reflected the magic of Dolce & Gabbana. The new pink dye on his hair looked more gorgeous as he wore the lovely white suit.

Tease From The Musician

Before appearing publicly, Machine Gun Kelly already teased his followers on his Instagram Page. In a joking tone, he asked the fans to be a part of his wonderful tour to catch a glimpse of his extraordinary hair. The revelation of the actual looks however took place sometime later. Kelly stated that he decided to go blonde. These words made the audience predict a lot about his upcoming looks. Finally, when they came across the Neon Pink color, their eyeballs were transfixed.

MGK always has had a passion to try something new with his hair. So, it is pretty natural that hairstyle is one of the primaries focused to change the looks of this artist. However, most of the styles made him the talk of the town instantly. For many, the new hairstyles seem to be favorable, while some others may not approve the same. The Neon Dye also brought mixed reactions from the singer’s incredible fanbase.

More About The Stylish Appearances

Along with the “Pink” hair, MGK also posted a picture with Pink Nails and wrote that he is complete “PINK” now. It was indeed a compelling post for all the fans in various corners. Especially, the looks inspired the youth a lot and many of them have indeed copied the style also sharing the same with the star.

The pink shades became the favorite of the couple for quite a few days. In fact, the media captured them in terrific sexy pink wear last month. The occasion was the premier show of Good Mourning. Their funky style is indeed influencing lots of youngsters and the clothes are becoming a hot example for the American outfit industry.

Tale Of The Twinning Tattoos

Have you seen the lovely tattoos of Fox and Kelly? They will just blow your mind just like the impressive outfit. They love to wear color-coordinating clothes to catch the attention of many. However, if you are not impressed by the twinning of their clothes, please take a look at their tattoos. These are twinning also with a special couple feel.

In one of the candid interviews, Megan stated their relationship is the biggest influencer of a distinct look. Most of the time, the two try to do something unique with their appearances, be it dress or hairstyle.

The two also got matching tattoos on their ring fingers as a sign of perfect love and bonding. The rapper dedicated a special post for his lady love on the occasion of her birthday by giving a picture of these tattoos. The pictures were of voodoo dolls with mouths and eyes completely stitched up. Although it looked weird to many, several people appreciated its uniqueness also.

In one of the interviews, both of them agreed that they love to twin their looks while attending any function. Even the famous actress also indicated that they do not really go out unless their outfit is matching. This fact is highly fascinating and proves that the star couple is always choosy about their dress codes. Fox also remarked that her boyfriend takes considerable time to get dressed.

Hence, she always makes sure that he is taking all the preparations to match his appearance of Fox in every way. The couple is thus indeed different and is loved by millions across the globe for their amazing attire.