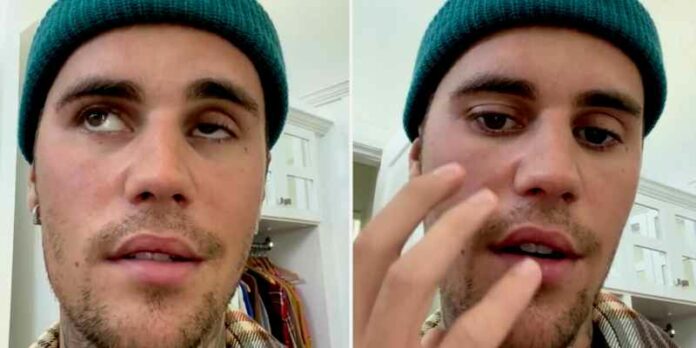 The recent Instagram post of the famous singer Justin Bieber made the fans upset. He uploaded a heart-wrenching video revealing how much he is suffering now due to facial paralysis. Bieber’s words disheartened the viewers as they learned that their favorite singing sensation is going through a tough time.

The post read that Justin is diagnosed with a very rare disease that occurs due to the shingles outbreak. It is called Ramsay Hunt Syndrome affecting the facial nerves. Thus, he is currently suffering from a paralysis of the face up to his ears.

Even the challenging condition is prominent on the face of the singer when Bieber shot the video. It is indeed very pathetic and people are wishing a speedy recovery for the marvelous artist. Please check out the relevant details in this content and know the exact disease that Justin Bieber is suffering from.

The sad video which Bieber posted showed clearly that the singer was unable to move one side of his face. Clarifying the name of the disease, he added that it is caused by a peculiar virus named varicella-zoster. It belongs to the same family in which the virus for chickenpox belongs. However, the ultimate result of the disease is very painful. Furthermore, it was really problematic to smile also with one of the faces totally paralyzed.

Just not the smile, with such facial condition, one eye also did not move. Moreover, it affected the movement of the nostril also.

After this heartbreaking video, a story showing the frustration of the singer made hundreds of fans cry. Justin Bieber sought the blessings from everyone watching his video and remarked that he was feeling lots of difficulties having food. Of course, such a condition for one of the best singers in the world at present is not at all desirable. Everyone is praying for the singer from various parts of the globe. Hope that he will be alright soon and can get back to normal life.

What Does Bieber Say About The Disease?

The singer did not yet reveal the exact time from which he has been suffering from the rare facial disease. However, the cancellation of all his recent shows this year proved that something was definitely wrong with the singer. The 2022 Justice World Tour suddenly came to a halt for a mysterious disease of Bieber. But before he declared anything on social media, no one understood why Justin was not participating in the World Tour.

However, the sensational artist is hopeful that with everyone’s blessings, he will surely recover. Generally, a few weeks are enough for any virus to mitigate. Moreover, on the instructions of the physician, Justin has been practicing different facial exercises. Many improvements are also being observed in his health due to the regular exercise sessions.

A recent survey is telling that out of 1,00,000 individuals in America, around 5 have this rare disease. The percentage of the acute cases is seven on an average. Anyone can learn about the disease in detail from the concerned sites on the internet. Nerve pain can become very disturbing for many patients. As a result, for them, it can take a considerable time to recover fully. Hence, nothing can be said with certainty about when the singer will come back to the real form. After all, if the face cannot work properly, he will not be able to mesmerize the audience with his incredible voice.

A person for whom music is everything cannot bear the paralysis of his face. However, it seems that the singer has not lost his strength and confidence. Of course, the disease is not a common one and will require some more time than usual to get recovered. But that does not mean that the singer will not become normal ever. Only correct postures, exercises, and complete rest can help Bieber in the process of recovery.

Reactions Of The Netizens

The netizens seem to be very worried after coming across the video of Justin Bieber. It is very hard for them to believe that such a fantastic singer is now forced to stay indoors without any shows. It is truly heartbreaking that they will not get to hear the lovely voice anytime soon. However, time is the biggest healer for everything. So, just like the singer himself, they should also wait for the right moment to arrive.

The fans are continuously showering the “Get Well Soon” messages. Some are also sending flowers to the singer’s home also. So, it is clear how much people love Justin. It is of course an overwhelming moment for the artist, amidst all the pains. He is also thankful to everyone for showing such affection and love for him without any condition. We all expect Bieber to be back on the stage soon after overcoming this tough phase of life.

Tribute has been paid to actor Marcello Magni, whose death at 63 was announced on Sunday by Simon McBurney and Complicité, the theater company they co-founded nearly 40 years ago. McBurney said that he was "totally heartbroken" and called Magni...