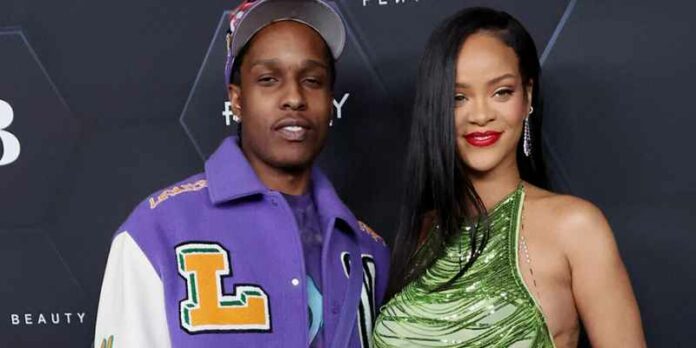 After the birth of their son, A$AP Rocky finally confronted the public. It is truly a great moment for all the curious fans who were eagerly waiting for this moment. Furthermore, they were also concerned about the health of the pop star Rihanna and her newborn. The famous star also posted different photos on social media and declared that their son is absolutely fine. These images won the hearts quickly and caught the attention of hundreds of followers.

The 33-year-old pop artist has embraced fatherhood recently. Hence, there is no doubt how much excited he would be after this new turn of events in his life. The media found him in a joyful mood on 8th June, Tuesday. The first public meeting as a father took place in a recording studio in Brentwood. The bundle of joy came to the life of the rapper and his pop-star partner Rihanna on the 13th of May. Hence, people went crazy after getting the famous personality came in front of the audience after so many days.

Along with the baggy jeans, the star came in a shearling jacket. The white and blue hues of the outfit were making him look quite stylish. However, this is not the end of the outfit. He also wore beautiful diamond studs and boots of camel color to complement the lovely outfit.

Furthermore, the beaded necklace and Diana tee-shirt were the added attraction that mesmerized the spectators. The vintage look of the Diana Ross image on the front of the t-shirt left people in awe as the rapper walked past the crowd. Therefore, his happiness was reflected in his gestures and appearance.

The Outstanding Rocky On A New Journey

After giving so many hits to the world, Rocky is now on a new path. Moreover, resources confirmed that he was always supportive during the pregnancy of his beloved Rihanna. If the partner shows concern and affection, every girl will feel special during this amazing and most important stage of life.

Furthermore, the responsible daddy never gave a second thought when the infant needed a change of diapers. Even now he wakes up to soothe the baby and cradle him. As a caring partner, he does not want to put any pressure on the new mom.

Moreover, there is no hesitation in his voice in admitting that Rihanna needs maximum rest at this crucial stage. So, he will not mind doing some babysitting. After all, it is the responsibility of both parents to take care of the child.

Initially, the fans of Rihanna could not believe their eyes when the Diamond singer announced her pregnancy. Moreover, the relationship with Rocky was always under the wraps and both of them did not find it easy to share their private life with the public. However, the news came as a grand surprise for all the followers of both the stars. The loving couple looked very much involved and serious with their relationship. Furthermore, they wanted to take it to the next level.

Bringing a new life to the Earth is something that Rihanna is always fascinated about. Hence, this moment was indeed special for the pop star. She confirmed that this child is going to be a gift of love for the special person in her life, A$AP Rocky. The rapper was also seen respecting the lady on every occasion.

Arrival Of The Little One

The new member of the family is a baby boy and is already on the headlines within a few days of his birth. However, his celebrity parents decided to avoid the public for the initial days. After almost a month, Rocky found it appropriate to come out in the public and share his happiness with all his well-wishers.

Previously, the concept of having a child was not so clear for the DMB rapper. However, time teaches people lots of things and even brings huge transformation. This is evident from the current gestures of this new dad. The idea of having the most fly baby is now an impossible past that he does not want to think of anymore. Presently, the caring father is truly excited and satisfied that his baby is absolutely healthy and doing very well.

Besides, the mother of the newborn is also free from any health crisis. The moment he held their son in his hands for the first time, Rocky was filled with emotions. It was an unbelievable moment for them that will remain imprinted in his mind forever. Every second he is thanking the Almighty for giving him such a lovely gift. He also considers himself to be a lucky man for getting Rihanna in his life. We expect that both the rockstars will put the stage on fire very soon.