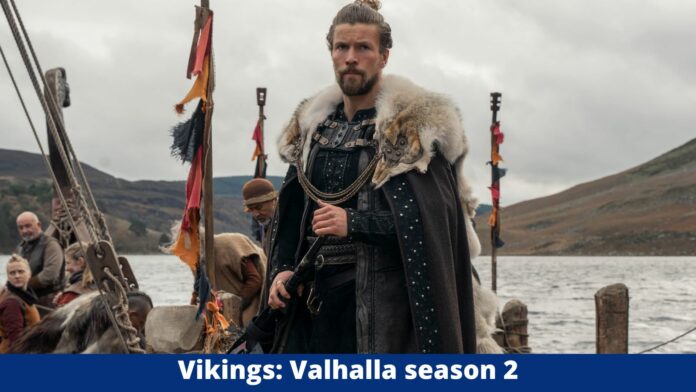 Jeb Stuart is the mind behind the historical drama streaming television series Vikings: Valhalla, which was produced by Netflix. It is a continuation of the series Vikings that airs on History and was filmed in County Wicklow, Ireland. The series narrates the beginning of the end of the Viking Age, which was marked by the Battle of Stamford Bridge in 1066. It is set one hundred years after the events of Vikings and takes place one hundred years later. The first episode of the series debuted on February 25th, 2022. The television show was officially picked up for a second and third season in March 2022, after it was stated in November 2019 that a total of 24 episodes would be produced.

Vikings: Valhalla season 2 is not coming to Netflix in June 2022!

The unfortunate news is that, as of May 2022, there has been no fresh information indicating when precisely that may be. Vikings: Valhalla season 2 is not coming to Netflix in June 2022. There is no official news regarding the possible release date.

Since filming on the second season was completed in November 2021, the premiere of the second season on Netflix is most likely going to take place in the early part of 2023, namely between the months of January and March 2023.

Is Ragnar in the new Valhalla?

Ragnar Lothbrok has been dead for several generations, but the exploits he had and the values he upheld continue to have an impact on Viking society in the Netflix series Vikings: Valhalla. Even though a significant amount of time has elapsed after Ragnar Lothbrok’s passing, his name is still spoken by a number of characters in the new series Vikings: Valhalla that is available on Netflix.

In addition, it is quite possible that Jóhannes Haukur Jóhannesson will reprise his role as Olaf, as will Soren Pilmark in the role of King Forkbeard, and Bradley Freegard in the role of King Canute. Even though Jarl Haakon passes away in the first season, the actress who plays her, Caroline Henderson, has dropped hints that we could see more of her character in the second season.

Henderson was quoted as saying to Metro, “We don’t actually know that [she won’t be returning].” It’s possible that we’ll see her again in the form of a ghost or whatever.

It’s also feasible that some of the characters from Vikings may be joined by their offspring in later seasons of the show. During an Ask Me Anything session on Reddit, showrunner Stuart responded positively to the subject of whether or not Ivar’s descendants may play a part in the show by saying, “A really fascinating question.” When I was coming up with the story for the second season, I performed a lot of math to try to figure out where we would be with Ivar’s descendants. Since upcoming seasons of our show will take place while our Vikings are out in the wider world, everything is conceivable.

What is going to go place in the Vikings Valhalla season 2 plot?

Given that we are discussing the history of the Vikings, it is only natural that there will be a great deal to explain in season two.

At the conclusion of the series, the kingdom of Kattegat was seen to be in ruins and ablaze, with Freyd’s and Harald staring down upon the country as it was reduced to ash.

The actor who plays Harald, Leo Suter, gave some hints to Digital Spy about what the future holds for his character with Freyd and their possible romantic involvement in the future.

In his words: “These are two persons who are… they have a lot in common and they complement one other very well in their collaborations. But at the same time, there are significant pressures and significant passions that are driving them apart, and as is the case with any kind of love tale, there is… it is so simple in some regards, but also so intricate in other ways.”

On the other hand, Leif was observed to be prepared to seek vengeance on those responsible for what took place, particularly after the unexpected loss of his close warrior friend Liv.

In an interview with Newsweek, Jeb Stuart dropped a clue that the Vikings will be venturing further afield and seeing cultures to which they had not been exposed previously.

They were quite successful in business. They traveled all the way across the Middle East, stopping in Constantinople, Egypt, and then Egypt again,” he explained. The DNA of Vikings has been unearthed in practically every corner of that region of Europe. They traveled to the Iberian Peninsula in addition to England and Ireland, as could be expected.

Therefore, it should not come as a surprise to you that my Vikings are planning to embark on their ships and do some exploratory sailing.

Although we are aware that production has begun on a second season, there is currently no trailer available to whet our appetites. It is typical for Netflix to release a trailer about a month or so before the premiere of the series; thus, we will need to be patient for the time being. Until then let’s watch the trailer of season 1,

The review aggregator website Rotten Tomatoes stated that the film had an approval rating of 89 percent from the critics, with an average rating of 7.0 out of 10 based on 27 reviews. The ratings received from the audience were assessed to be 53% based on 741 reviews.

According to the website’s critical consensus, “Reveling in the glory of plain adventure narrative, Valhalla is a bloody fine dramatization of Leif Eriksson’s conquests,” the film Valhalla is a bloody good dramatization of Leif Eriksson’s conquests. It received “generally positive reviews,” as shown by the weighted average score of 70 out of 100 that it received from Metacritic, based on reviews from 13 different reviewers.