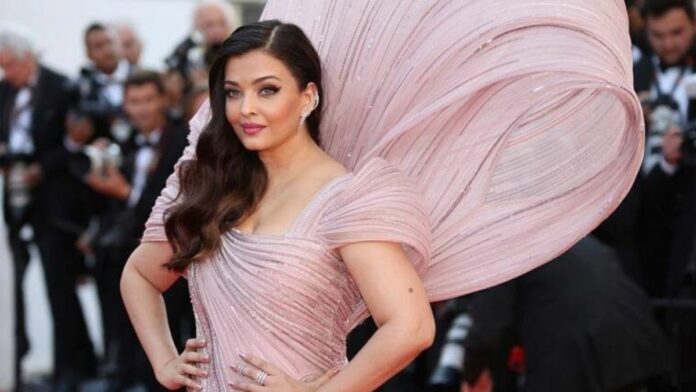 The Cannes Film Festival of 2005 saw Indian diva Aishwarya Rai Bachchan in a stunning look on the red carpet. However, this is not the first time the former Miss World has come on this red carpet. Her debutante year at Cannes was 2002.

In 2005, Aishwarya Rai Bachchan made history as the first Indian actress to open the Cannes Film Festival

The graceful appearance of the gorgeous lady brightened up the whole scenario.

In 2002, Aishwarya participated in this grand ceremony, and her co-star Shah Rukh Khan and director Sanjay Leela Bhansali for the outstanding performance of their movie Devdas.

It has been 18 years, and Aishraya is the same piece of diamond adorning the prestigious event.

Achievement Of Aishwarya At Cannes 2005

Aishwarya Rai Bachchan fascinated everyone with her exquisite appearance at the Cannes Film Festival 2005. Furthermore, she was the first-ever actress from India who become a Jury member of this festival in 2003.

After that, 2005 became a remarkable year for the artist when she was the first-ever Bollywood star to open Cannes. The overall moment was phenomenal, and Aishwarya is praised even today for this achievement.

The awe-striking appearance of Mrs. Bachchan continued to woo the spectators in 2022 Cannes also. The gorgeous pink dress with a huge curve over her head captured the attention of many.

Although the netizens show mixed reactions to her looks, most people appreciate the beauty of this Indian celebrity.

A throwback video from 2005 recently became viral on the internet. It declared the opening ceremony of the Cannes Film Festival 2005 from the hands of the former Miss World Aishwarya Rai Bachchan.

You can see the actress walking down the red carpet in a flattering black dress. It was the 58th year of Cannes, and the event was undoubtedly star-studded.

The festival continued for 12 days starting from 11th May to 22nd May. A white maxi dress was her first outfit in the show. The lady with blue eyes captivated hundreds of people with her incredible looks.

Giorgio Armani was the designer of this pretty dress. Later on, she also made a bombastic appearance in a black gown of Gucci.

The competition became quite intense with the presence of 20 movies. Thirteen countries were the proud participants of Cannes 2005.

By conducting the grand opening of Cannes, Aishwarya looked like a showstopper.

The breathtaking appearance surpassed all the Hollywood celebrities also. Being the first Indian woman ever to open a foreign film festival, she became the center of talkies for the media worldwide. Undoubtedly, such an event was a matter of great prestige for the whole of India.

After so many years, the young mom’s charms are still the same as we can see her in 2022 Cannes. The Valentino suit of the actress ensured that Ash looked arresting in the shimmering pink attire.

Presently, she is the brand ambassador of Loreal Paris and hence became a part of their 75th Anniversary Dinner ceremony. After completing around two decades, it will not be wrong to call the lovely maiden the Global Ambassador.

The extraordinary gown of the actress succeeded in grabbing the viewers’ attention when coming across the photos of Cannes 2022. Gaurav Gupta was the designer for her next look in a pink gown inspired by Venus.

This time, Rai Bachchan, opened up about her long journey of 20 years with The Cannes. The celebrity opined that joining such a film festival is often a matter of prestigious and excitement for her.

Furthermore, there is nothing to say separately about the experience. It is always a sign of positive progression and a deep bond between the world and Indian cinema.

Thanking God, the actress said that she does not have anything to complain about as God has always been generous to her. Moreover, she has also been blessed to attend such significant events infusing positivity at every moment.

Thus, the 20 years of journey impacted Aishwarya and is continuing to do so till this date.

Forthcoming Projects Of The Actress

Hollywood has appreciated the talent of the stunning actress in various ways for decades now. However, people of India are still dying to get her in more movies in the coming days. After becoming the mother of a cute daughter, Aishwarya reduced the number of films considerably.

But this time, she is all set to make a comeback with a Mani Ratnam film. The South movie will soon be released in September 2022.

Although the tentative date is 30, no finalization has been made yet. Resources revealed that the famous artist will be sharing the screen with Jayam Ravi, Vikram, Sobhita Dhulipala, Karthi, and many others.