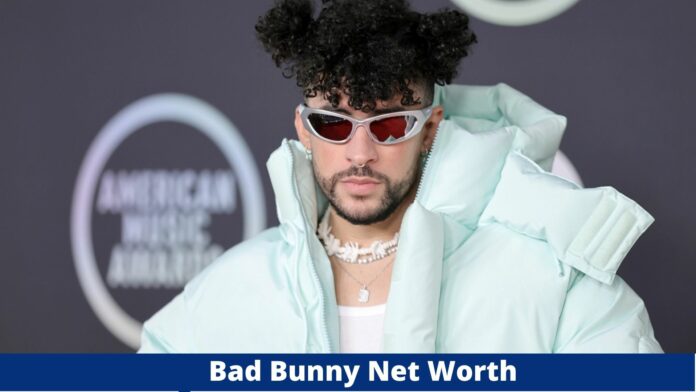 How much is Bad Bunny Worth?

Bad Bunny is a rapper, singer, and songwriter from Puerto Rico with a net worth of $18 million. In a very short period of time, Bunny rose to prominence with meteoric speed. Bad Bunny was the most streamed musician in the world in 2020, with a total of 8 billion streams of his tracks. His music is generally categorized as “Latin rap” or reggaeton, but he has also experimented with rock, bachata, and soul. Bad Bunny is renowned for his unusual sense of style and slurred vocal delivery.

Bad Bunny earned a record deal and released the breakthrough single “Soy Peor” after earning success on SoundCloud while residing in Puerto Rico. Then, he increased his fame by working with Drake and Cardi B on songs such as “I Like It” and “Mia.” These chart-topping singles launched Bad Bunny into the limelight, paving the way for the release of his first album, “X 100pre,” in 2018. Afterward, he partnered with J Balvin to make the album “Oasis,” which featured a series of other chart-topping singles.

By the year 2020, Bad Bunny was one of the world’s most popular musicians. He was on the cover of “Rolling Stone” magazine and also played in the Super Bowl halftime performance. Bad Bunny capitalised on his popularity by releasing his second studio album, “YHLQMDLG,” in 2020. At the end of the year, he released a compilation CD as well as “El Ultimo Tour Del Mundo,” his third studio album. This later record was the first Spanish-language album to ever top the US Billboard 200 chart. His number-one hit “Dakiti” contributed to the popularity of “El Ultimo Tour Del Mundo.”

Bad Bunny was born in the Almirante Sur neighbourhood of Vega Baja, Puerto Rico, on March 10, 1994.

His mother, Lysaurie Ocasio, is a retired schoolteacher, while his father, Tito Martnez, was a truck driver.

His mother frequently listened to salsa, merengue, and ballads such as “Abrázame muy fuerte” by Juan Gabriel while Bad Bunny assisted her with household duties. His family includes his two younger brothers, Bernie and Bysael, as well as his close pals. He stated that he was reared in a loving family.  As “The rapper has characterised himself as a youngster as “a lanky wallflower with a booming voice,” adding, “I wasn’t the kid that got engaged in the streets. I enjoyed being with my family at home.”

Bad Bunny claims that he has always aspired to be a singer.

Until the age of 13, he attended church regularly with his devoutly Catholic mother as a youngster and sung in the church choir. After quitting the choir, he became interested in the radio musicians he heard, especially Daddy Yankee and Héctor Lavoe. His first solo performance was at a middle school talent event, where he sang “Mala Gente” by Juanes. The origin of his stage name was a moment when he was compelled to wear a rabbit costume to school and was photographed with an angry face.  Despite being timid in high school, he frequently composed freestyle raps to entertain his peers, earning him a reputation for originality and comedy at his school. Both skateboarding and professional wrestling, which he enjoyed as a teenager, inspired his dress style.

Bad Bunny noted, about his separation from the Puerto Rican music business, “I am from Vega Baja, a tiny town that is not a large city like San Juan, where the majority of the genre’s performers have originated. This is the most astonishing and remarkable aspect of the situation: I came from nothing. When I was in school, I would sing on a balcony while people listened from a distance.” When he was young, his mother wanted him to become an engineer, his father wanted him to become a baseball player, and a teacher predicted that he would become a fireman. Instead, he studied audiovisual communication at Arecibo University in Puerto Rico.

How much money does Bad Bunny make per show?

According to your statistics, Bad Rabbit makes at least one million dollars every presentation, which translates to around twenty million and three hundred and eighty-four thousand pesos per date.

In 2016, Bad Bunny worked as a grocery store bagger while attending college and creating music on SoundCloud. Eventually, DJ Lucian heard his song “Diles” and signed him to the Hear this Music record label. Bad Bunny then cooperated with a production crew called the Mambo Kingz, who were quickly taken aback by Bunny’s distinctive sound and attire.

Throughout the subsequent time, Bad Bunny released many top-ten hits on the Latin Charts. Bad Bunny became one of the top musicians in the Latin American trap genre as a result of his astronomical streaming statistics and hundreds of millions of YouTube views. Songs such as “Soy Peor,” “Krippy Kush,” and “Ahora Me Llama” helped him achieve mainstream success as a musician.

In 2017, he obtained further contracts and began making television appearances. Bad Bunny has also worked extensively with Latin musicians like as J Balvin, Prince Royce, and Ozuna. With “I Like It” in 2018, he began his foray into English-language music. Cardi B appears on the single, and Bunny raps in English, Spanglish, and Spanish. “I Like It” became his first number-one song and led to a second collaboration with Drake, “Mia.”

Bad Bunny was prepared to release his debut studio album in 2018. This occurred shortly after he parted ways with Hear This Music and joined Rimas Entertainment, as his former record company did not contribute to the recording process and stopped Bunny from releasing an album. The album “X 100pre” garnered positive reviews from reviewers, and he subsequently embarked on a long tour.

The next year, Bad Bunny released “Oasis,” a duet with J Balvin. He played at Coachella that year. After performing in the Super Bowl halftime show in 2020, Bunny released the song “YHLQMDLG,” an abbreviation for “I do what I want.” Critics admired his variety, and he released a third album later that same year, which caught many people off guard. Bad Bunny created songs with themes of seclusion, quarantine, and dread during the Covid-19 crisis.

Bad Bunny has indicated that he prefers a tranquil lifestyle, claiming that he departs the region quickly following a show to avoid crowds. When he was overwhelmed by his quick climb to prominence, he temporarily withdrew from social media. In 2018, seven billion people saw his YouTube videos. Bad Bunny participated on the “Away” team in the 2019 NBA All-Star Celebrity Game at the Bojangles’ Coliseum in Charlotte, North Carolina.

In 2017, while dining with his family at a restaurant, the rapper met the jewellery designer Gabriela Berlingeri, and the two began dating shortly thereafter.

The connection between Bad Bunny and Berlingeri remained a secret until 2020. He gave the following justification for his choice to admit their connection publicly: “I enjoy her company. When I was in need of emotional support, [others] are unaware of how much she has helped me.” When she photographed the rapper for the magazine’s May 2020 cover, Berlingeri became the first Latina to shoot the cover of Rolling Stone.

Born on March 10, 1994 in San Huan, Puerto Rico, both of Ocasio’s parents reared him. Currently, he resides in the municipality of Vega Baja, which is situated on the north-central coast of Puerto Rico. He has frequently boasted about his own country and has no plans to leave it in the near future.

Bad Bunny has a total of four costly automobiles. He is the proud owner of a BMW M4, Mercedes G-Wagon, Rolls-Royce Dawn, and a Bugatti Chiron. These opulent automobiles are his most prized possession, and he is frequently seen driving one of them around town.

Bad Bunny will be the first Latino to lead a Marvel film in the 2024 release of Marvel’s next film, in which he will play the major character. Bad Bunny’s projected net worth in 2022 is around $18 million.