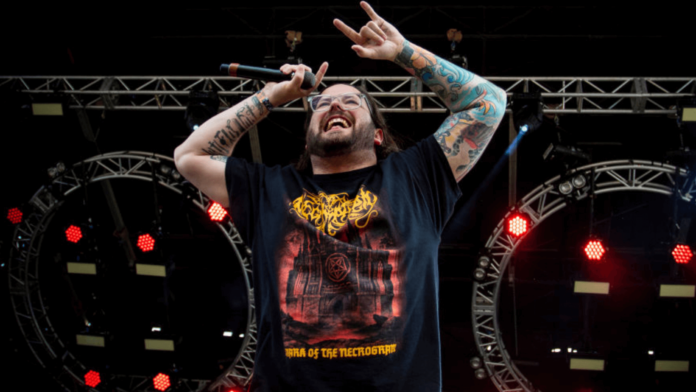 The members of The Black Dahlia Murder have shared a devastating news on their last Instagram post. The band’s co-founder and main vocalist, Trevor Strnad has passed away at the age of 41. The news was shared on the official social media pages of the band on Wednesday. The band has posted a black picture and has captioned it, “It is with deep sadness that we announce the passing of Trevor Scott Strnad.

Trevor Strnad, The Lead Vocalist Of The Black Dahlia Murder Dies At The Age Of 41

Beloved son, brother, and Shephard of good times, he was loved by all that met him”. The caption continued by saying, “A walking encyclopedia of all things music. He was a hugger, a writer, and truly one of the world’s greatest entertainers. His lyrics provided the world with stories and spells and horror and whimsy.

It was his life to be your show”. Members of the band haven’t disclosed the cause of the death but they have added the contact number of the National Suicide Prevention Lifeline in the caption, so it can be assumed that the cause of death was suicide. The news of Strnad’s death has shocked millions of music lovers and many have conveyed their condolences by commenting on the band’s social media posts.

Many bands and musicians including Darkest Hour and Misery Index have commented their condolences below the post of The Black Dahlia Murder. Darkest Hour has said, “Just don’t know what to say-we love you guys so much”.

The band gained popularity after releasing their second album Miasma which was also featured on the Billboard 200 list. The band released their last album Verminous in 2020. The band was supposed to do a tour in 2022 but things have turned upside down for the band with the sudden death of Trevor Strnad.

As Strnad was the lead vocalist and the founding member of the band, things have indeed become tangled for the band. The band has released 9 albums in the past 19 years and a few of their most famous albums are Ritual, Nocturnal, Everblack, and Abysmal.

Trevor Scott Strnad was born on 3rd May 1981 in Waterford, Michigan. Strnad has been interested in metal music from a very early age and his passion for music led to the formation of the band. Strnad has not been just a singer but he is also a writer who has published many articles on metal music. Trevor Strnad also wrote some songs for the band.