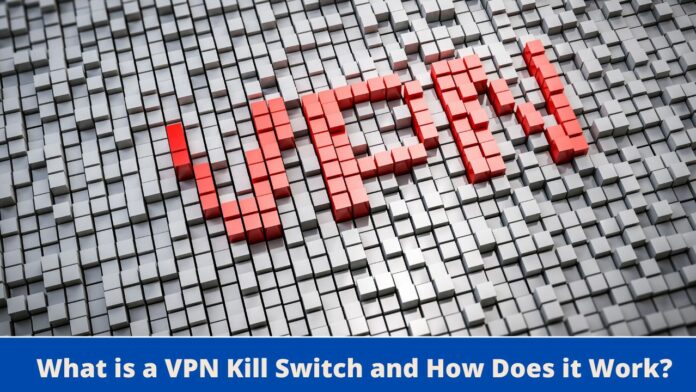 If you want privacy and security while streaming online, you must use a Virtual Private Network. A VPN encrypts the data that is exchanged between you and the server and keeps your identity private. But what to do if your VPN connection suddenly drops?

If your VPN connection is lost suddenly, your identity is exposed to others. Obviously, you wouldn’t want this as you don’t want to end up in trouble. Moreover, your data and personal information will be more prone to cyber criminals who commit various crimes such as identity theft. This is problematic as VPNs are designed to provide protection to your device and data. In this situation, the VPN kill Switch feature proves to be very handy. Here in this post we’ll learn more about what a VPN kill switch is, and how it works. Let’s dive into the details!

What is a VPN Kill Switch?

A VPN kill switch disconnects your device automatically if the VPN connection drops. Thus, your device is protected and your IP address and personal information isn’t exposed to the ISP or the government. It is a useful VPN feature, offered by almost every premium VPN service, that keeps your device disconnected from the internet until the VPN connection is restored. With a VPN kill switch, there is no chance that your IP address is accidentally revealed.

This feature is designed for emergency cases. It works like a safety feature that switches off the machine or disconnects it from power when there is an emergency. If you’re thinking that the Kill Switch is a physical thing, you’re wrong. It is just a feature that comes built-in with some apps, such as the VPN apps. The VPN Kill Switch is also known by other names such as a Network lock or Network Kill Switch. This feature is very popular especially with the online security software.

How does a VPN Kill Switch Work?

How to Enable the Kill Switch Feature?

Not all the VPN apps are equipped with a kill switch feature. So, if you’re looking for an additional layer of protection for your devices, you must consider a VPN that has this feature. For those VPNs that are equipped with the Kill Switch Feature, it isn’t hard to locate it. The good thing is that many VPNs have already enabled this feature so you don’t even need to find it to switch it on. The process of enabling a VPN Kill Switch is easy with most of the VPNs. For example, for ExpressVPN the VPN Kill Switch is referred to as the ‘Network Lock’. You can find it in the preferences section:

For the ExpressVPN, the network lock is not enabled by default. You just have to go to the Preferences and then check the box indicated in this picture.

This is the same for the NordVPN kill switch, which you have to enable by going to settings and enabling “Always on VPN”. You can click here to find out more about how this feature works.

The VPN Kill Switches are of two types:

The main difference between these two types of kill switches is the reaction time. An Active Kill Switch Protocol actively interrogates the network to determine any disturbances to the VPN. If it identifies any issue, it gives a message to your device and keeps it protected from being connected to an unsafe network.

Why do VPN Connections Drop?

VPN connections can fail due to several reasons, even if you’re using the best one. The best VPNs are designed to maintain reliable and stable connections and they don’t face disruptions in the connection often. However, still every VPN can go through this and it takes just a few seconds of your exposed identity to cause security threats. Following are the main reasons why the VPN connections fail and a VPN Kill Switch kicks in:

A VPN Kill Switch gives a peace of mind that your device is well-protected even if the VPN service fails to connect. It ensures that the device disconnects automatically and the transmission of data is stopped. Your online privacy is very important and a VPN Kill Switch provides an additional layer of protection to the VPN service.

How To Ensure Your Salesforce Data Protection