Joey Defrancesco, the munificent Jazz Organist, saxophonist, and trumpeter of America died on...
HomecelebrityWho Is Nakobe...

Who Is Nakobe Dean? Linebacker Nakobe Dean’s Critics Have A Field Day With Kirby Smart! 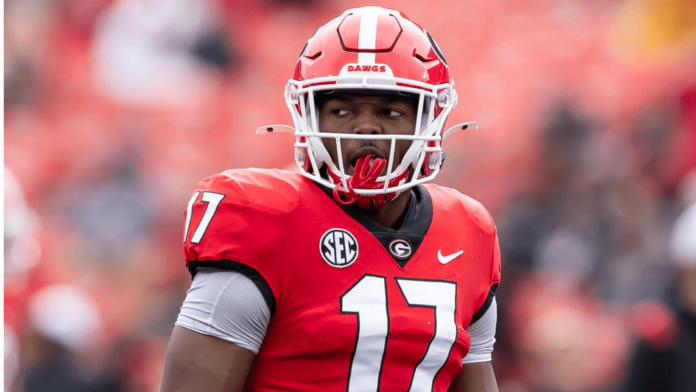 Nakobe Rashed Dean is an American football linebacker. The 21-year-old Mississippi native plays for the team, Georgia bulldogs. He is 6 feet in height and weighs 225 pounds. He is considered to be one of the top linebackers and he has been declared for the NFL draft 2022. The bulldog team represents the University of Georgia in American football and is considered to be one of the best teams in the NFL.

Who Is Nakobe Dean? Did He Deserve To Go First?

Nakobe Dean has been criticized for his size and his ability to perform in the NFL draft. But the head coach of the Georgia bulldogs team, Kirby smart doesn’t take it to be a good idea as he ensures that he is very well aware of the kind of potential Nakobe Dean has.

Recently, the linebacker Nakobe Dean and the head coach Kirby smart has given an interview to ESPN’s first take on Thursday morning, smart was asked by co-host Molly Qerim what would be his response to the critics saying that dean is a bit undersized.

“I would say look at the NFL linebacker right now and all the free-release games that teams do to throw the ball out of the backfield (to the Christian) McCaffrey, the Dalvin cooks, and all these guys. Who’s got to cover that guy? He does,” smart said, pointing towards the dean.

” You better have a guy that can run, change the direction, and cover. He faced offenses like that. He went against James Cook every day in practice. That’s the kind of back you have to face every day in the NFL”

The bulldog’s team coach Kirby smart definitely thinks that he is perfect for his role in the team and there’s no point in criticizing.

The linebacker was often compared with a Utah linebacker, Devin Lloyd who the experts considered to be better than the dean. When asked about this opinion by the dean.

His reply was, “I believe I am the best linebacker in this year’s draft, hands down. Besides everything I do on the field, I feel like my mentality is second to none. My mentality, the way I think about things, my mindset, and my leadership ability, I feel I can lead like no other.”

Dean has also said in another interview how the coach had helped him in the process to become successful in the NFL and added that he has learned a lot from him being a freshman.

Kirby smart, when asked about the comparison of Dean with the other linebacker, the coach has praised him by pointing out the number of votes he got for the captaincy position. Smart says that there are pretty good players and leaders that one must know if they watched the combine and Dean was the only player to get almost every single vote in a total of 130 votes for captain in the history of the University of Georgia.

Smart added by saying “he does it every day. He walks into the meeting room, and he is a professional right now. He takes notes, and I never had a college kid take notes every single day. He had his notes out, writing things on every single day, and it showed on the field.”

Dean finished 72 tackles for the Georgia bulldogs team and led them to victory in the national championship. He was ranked first in defense. He was made the finalist for the wuerffel trophy and also the captain of the AFCA Allstate good works team for his community service efforts.