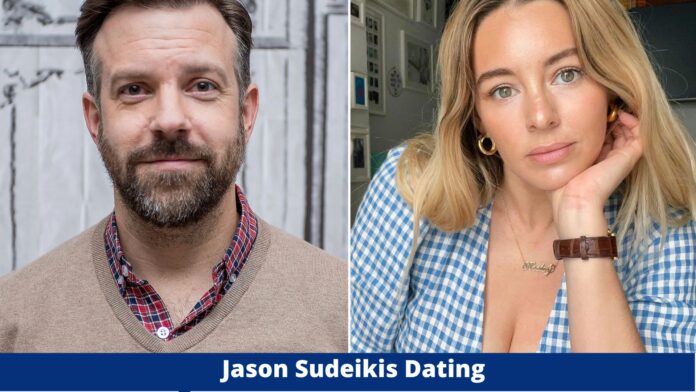 Jason Sudeikis has rediscovered love! He revealed his relationship with Keeley Hazell after his breakup with Olivia Wilde. The newlyweds seemed to be at ease on their weekend walk around New York City, where they made their first public appearance as a pair. A source reported on 28th June 2021 that the two are truly dating.

He was seen hugging his new girlfriend on their 27th June stroll around the city. According to the source,

“They’ve been dating for a short period of time. They’re just having a good time. This is not a significant situation at the moment.”

They were first connected in February and were suspected of being romantically involved. However, it was revealed that they had known each other for years and had become best friends after their encounter at Horrible Bosses 2. Since then, their friendship has developed into a committed partnership.

Jason called off his engagement to Olivia Wilde in November 2020 after nine years of dating. He made a hasty exit from his life. Olivia has also moved on from her relationship with Harry Styles. Fans are giddy with anticipation to learn more about Jason and Keeley’s new relationship.

Sudeikis  is divorcéed. After many years of dating Kay Cannon, they married in 2004 but were unable to maintain their marital life and separated in 2010.

He previously dated January Jones from 2010 to 2011. He is now engaged to Olivia Wilde and the two are planning to marry shortly.

The history of Jason Sudeikis and Olivia Wilde’s relationship

2011: Jason Sudeikis and Olivia Wile first met on 21st May 2011 at Saturday Night Live’s season 36 wrap party. At the time, they were both single. They began dating in November 2011.

2012: Jason and Olivia were engaged in December 2012 around the holidays, when Jason proposed to Olivia after a year of dating.

2013: Following their engagement, they shared a screen on August 23, 2013, when they were both casts in Drinking Buddies. On 27th October 2013, two months later, it was reported that she was pregnant with her first child. On red carpet appearances, she flaunted her baby bulge.

2016: When Jason appeared on Andy Cohen’s program, he indicated that there will be no marriage in the near future. In April, Wilde shared through Instagram that she is expecting another child. Daisy Sudeikis was born on October 11, 2016.

Additional information on their relationship

2018: Jason and Olivia admitted to participating in dare evenings. They make time for one another and go out many times a week. Similarly, on 24th March 2018, they attended the Los Angeles March For Our Lives rally.

2019: Olivia chose to pursue a career as a filmmaker. With the 2019 picture Booksmart, she makes her directorial debut. Jason was also included in the film.

2020: Jason and Olivia announced the end of their seven-year engagement on 13th November 2020.

According to a source, “the break occurred at the start of the year. It has been friendly, and they have developed an excellent co-parenting routine. Children are the family’s first interest and the core of the relationship.”

Jason Sudeikis is reportedly reunited with Keeley Hazell, as the two were recently caught kissing in Cabo on their romantic holiday.

Sudeikis and Hazell are reconnecting after his separation from Olivia Wilde, Page Six reports, and the Ted Lasso actor “feels secure” around Hazell following their split.

Hazell has apparently shown a readiness to take her relationship with Sudeikis to the next level as well, according to Page Six.

After allegedly confirming their romance in June 2021, People Magazine received images of the pair walking around New York City.

Keeley has a recurring part in the sitcom Ted Lasso, which stars Jason Sudeikis. Both previously cooperated on Horrible Bosses 2.

Alternatively, you may be interested in: Who Is Judy Austin Muoghalu, Yul Edochie’s New Wife? Instagram Is Filled with Images of Children