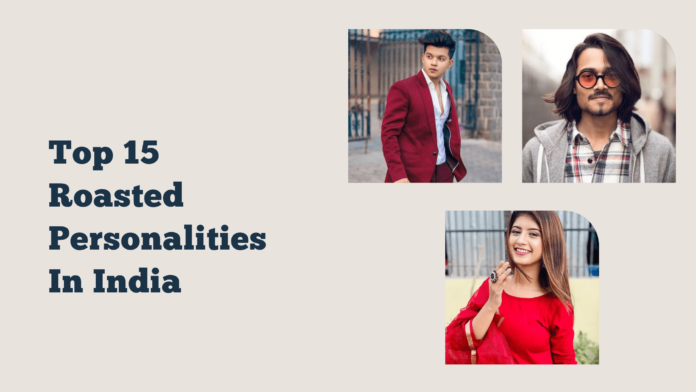 In a roast, a guest of honor is treated to jokes at their expense that mean to amuse the larger crowd at an event, and it is a way to honor a particular person uniquely. Taking the jokes in good fun and not taking them as severe criticism or insult is indicated here.

Here Are The 15 Most Roasted People In India

Here are the 15 most roasted personalities in India. Have a look at them. How do these people make waves around the world?

Amir Siddiqui is a well-known TikToker and online personality. Lucknow, Uttar Pradesh, is the city where he was born on January 4, 1995. Amir Siddique is one of the most roasted guys in India because of his TikTok video and their nonsense dialogue.

Among the most prominent and beautiful digital celebrities in the country, Avneet Kaur has been the target of CarryMinati’s wrath. He’s talked a lot about her, from her videos to how she’s changed over the years. Avneet Kaur is roasted chiefly due to their Instagram reels.

An Uttar Pradesh native, Dhinchak Pooja, currently lives in New Delhi. Her actual name is Pooja Jain, but she goes by the alias “Dinchak Pooja” because she sees herself as someone who combines all three qualities: talent, good looks, and a can-do spirit. Dhinchak Pooja was roasted by triggered insane Because there is no sense in Dhinchak Pooja’s song, and she is burned due to her nonsense song.

Actor, fashion blogger, tik tok star, and model Riyaz Aly is from India.TikTok videos with lip-syncs have been viral since he started posting them on his TikTok account. His TikTok bill has almost 26 million followers. Riyaz Aly was roasted due to his girl’s roles on TikTok videos.

He is an Indian actor and model, Arishfa Khan. With over 25 million TikTok fans, the Indian TikToker is among the most well-known TikTokers in the country. “Balveer” is one of her television shows, and Arishfa Khan is roasted chiefly due to their music video.

Mumbai-based dancer and choreographer Awez Darbar is a social media influencer. He was born on March 16, 1993, making him a Pisces by birth sign. Through TikTok, he became famous. Awez darbar every Time roasted due to his Instagram reels.

In August of this year, a video of Ranu singing Shor’s Ek Pyaar Ka Nagma Hai from 1972 at the Ranaghat Train Station in West Bengal went viral, and she became an overnight sensation. A young engineer named Atindra Chakraborty spotted Ranu Mandal at the station and uploaded her footage on Facebook. Ranu Mandal roasted because of the song.

TikTok model and star Beauty Khan are well-known in India, and TikTok videos with lip-syncs have been viral since he started posting them on his TikTok account. His TikTok bill has almost 20 million followers. Beauty khan was mostly roasted because of Her video on TikTok and Instagram reels.

Model, actor, and social media influencer Faisal Shaikh is a well-known TikTok celebrity, model, and actor.r Faisal Shaikh was mostly roasted because he made a video in ladies’ nighty. And triggered him insane and also burned him.

In addition to her YouTube channel, Payal Zone is also a roaster on YouTube. For her excellent Roasting Video on YouTube, she is the epitome of “Beauty Without Brain.” Her videos were widely roasted on YouTube due to their lack of logic.

An Indian poet, politician, and well-known Marathi television personality, Abhijeet Bichukale initially rose to prominence as a Bigg Boss Marathi participant in Season 2. Satara district’s Bichukale village is where he was born on November 28, 1976. Salman Khan mostly roasted Abhijeetn in Bigg boss due to his abusive words

As a Tamil Nadu state cricket team member, Vijay Shankar is an Indian cricketer. He Bats right-handed and bowls medium pace with his right arm, making him a versatile all-arounder. He was included in India’s World Cup team in April 2019. Vijay Shankar was the most roasted cricketer in India because Vijay Shankar completed his half-century in 51 balls. It was the slowest fifty by any batsman in the current season.

Indian cricketer Kedar Jadhav is an Indian Cricket team player and represents the team at the international level and plays for Maharashtra. Last season, Kedar Jadhav was widely mocked for his low batting average and lack of effort in the batting lineup.