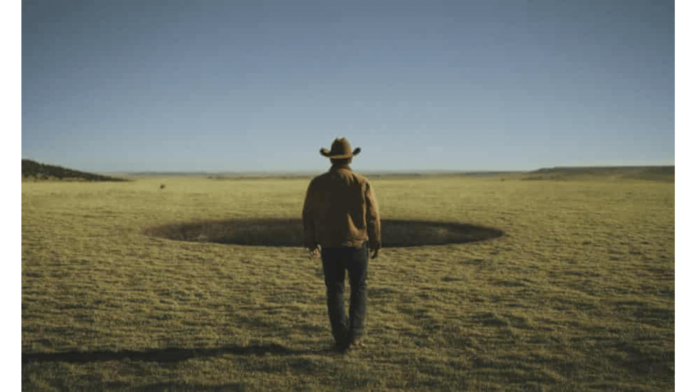 The Sci-Fi series gets a new addition with the release of the Western show Outer Range. It will have a stimulating effect on every viewer as they cannot sleep without completing the series at one stretch. This is the magic of the incredible plots of this suspense drama. The fantastic show streams on Amazon Prime and is a must-watch for all the lovers of mystery stories.

What is Outer Range About?

It is all about the search for two cows of Royal Abbott. Suddenly he discovers a hole that seems to be a medium to travel times. Moreover, the most exciting fact is that all these things were happening in his own pasture. However, after this shocking incident, the viewers will see another thrilling plot. It is regarding the sudden disappearance of Abbott’s daughter-in-law. At the same time, a stranger comes to the place for camping.

Now, it is to be seen what the real motive of this stranger is. Furthermore, the whereabouts of the lost daughter-in-law should also come into the limelight. What will Royal Abbott do now?

To know the ending of this marvelous story, you have to watch it till the end. Here we will discuss the location of Outer Range sets and the total number of show episodes.

Only two episodes of Outer Range are out on the internet to date. However, you will see six more episodes in the coming days. As per the declaration of the makers, there will be a total of eight episodes this season. Hence, undoubtedly after watching the first episode, the viewer will feel so much inclined to watch some more of the thrilling plot.

Josh Brolin fits the character of the protagonist Abbott so well that the scenes become realistic. But, apart from him, you will get to see the marvelous performances of many other top-notch artists in this show, such as Will Patton, Lili Taylor, Lewis Pullman, and others.

There is a piece of good news for the early-waiting fans for this month. In April 2022, two more exciting episodes will soon end your long wait. Furthermore, in the coming two weeks, you can enjoy 2 episodes per week. That will complete the series of eight episodes, including the present ones.

Here are the titles of all the episodes:

While the first episode introduces you to Royal Abbott and the actual mystery, the next one will show you the actions of the Abbott family. However, something is fishy about Royal and the whole family’s activities. What are they hiding? Only the subsequent episodes can give the answers to these questions.

Incredible Background of The Shooting

Most people love to watch western shows due to the lush green background and scenic beauty apparent from most outdoor scenes. However, the supernatural show “Outer Range” has some perfect shots for which the team did not have to travel much.

The backdrop of the story is a small village called Wyoming, and the plot revolves around the life of the rancher Royal Abbott. The behavior of a stranger, Autumn, seems very spooky to the Abbott family. Moreover, all of them are tense about the sudden disappearance of the daughter-in-law of the family. Gradually, several supernatural events will start unfolding, making the plot more intriguing.

As per the pre-pandemic decision, the team chose Canada as their movie’s location. But due to the COVID-19 scenario, they had to postpone the shooting. So finally, instead of March, the shoot began in January 2021. Therefore, they chose New Mexico’s Albuquerque as the new location for filming Outer Range. The audience will indeed find the scenes to be very attractive due to the diverse landscapes and mind-blowing beauty of Nature. Therefore, Amazon Studios made a brilliant decision to shoot such a marvelous film amidst the lush green fields with excellent panoramic views of the surroundings.

More Details About The Location

The Outer Range shooting took place mainly near the city. However, the members had to travel to many other places to complete the shooting in different locations. Besides New Mexico, the team went to Santa Fe and Las Vegas. The experience of every member of the movie set was fabulous and most exciting. The major studio where the shooting happened is I-25 Studios. The positive feedback from the audience for the first two episodes streaming currently puts some hope that they will appreciate the further episodes also.