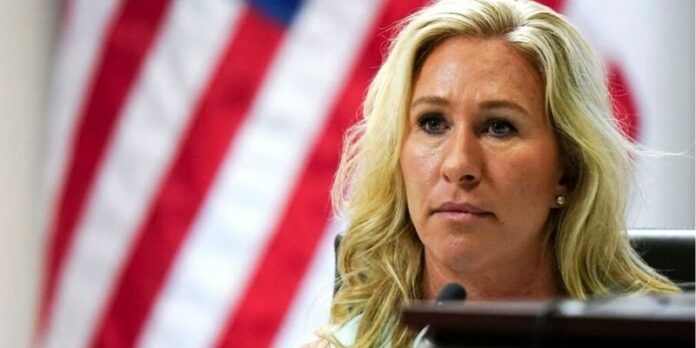 Marjorie Taylor Greene, a Republican representative from Georgia, insisted in court on Friday that she has no recollection of telling former President Donald Trump to declare martial law in order to stay in power during his administration.

An administrative hearing in Atlanta was being held to determine if the far-right lawmaker and close ally of Trump can be barred from participating in Congress for encouraging an insurrection against the United States. The statement was made during the hearing.
Mr. Andrew Celli, an attorney for Free Speech for the People, the group that is opposing Greene’s candidacy, confronted the candidate directly and asked if she wanted President Donald Trump to remain in power through the imposition of martial law. Martial law is defined as a temporary suspension of regular laws as well as the imposition of military rule.
“I don’t recall,” Greene said when asked about it.
When asked whether or not that constituted a denial, the congresswoman remained steadfast on her position.
“I can’t recall anything,” she admitted.

Following a brief intermission, Greene was asked a second time whether she had campaigned for the introduction of martial law, and she responded that she couldn’t recall the answer.
Several additional queries from Greene’s cross-examiners were answered in the same way on Friday, with the defendant stating she could not recollect specific utterances, including her previous support for House Speaker Nancy Pelosi’s execution.
Greene’s refusal to answer questions about whether she supported the proposal is remarkable because there is no publicly available evidence that she did. Because she is speaking under oath, it is possible that she will be found to have committed perjury if she explicitly denies anything that turns out to be true in the end.
Former National Security Advisor Michael Flynn previously stated that President Donald Trump should declare martial law in a Newsmax interview in late December of 2020, a position that he also promoted to Trump directly at the time.

No one who has taken an oath and served as a member of Congress “shall be considered to have engaged in insurrection or rebellion,” according to Section 3 of Article 14 of the United States Constitution.
In the past, Greene attempted to prevent the hearing from taking place; but, a federal court in Georgia determined on Monday that the challenge could proceed. As a result of the events of January 6, she is the first member of Congress to testify under oath regarding them.