Joey Defrancesco, the munificent Jazz Organist, saxophonist, and trumpeter of America died on...
HomeEntertainment15 Most Powerful... 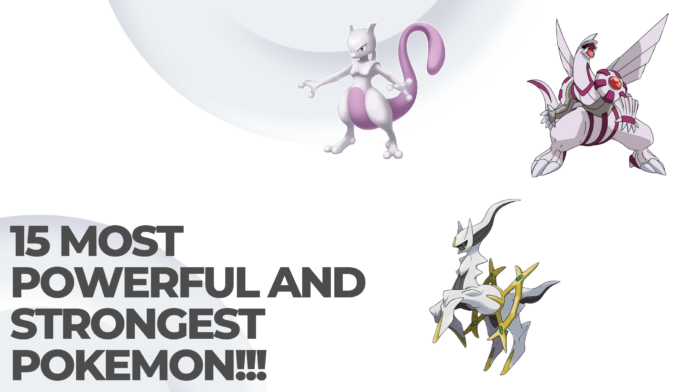 The lovers of the Pokemon cartoon will find all the topics involving the anime characters very interesting. Around 900 species are available in the Pokemon community.

15 Most Powerful And Strongest Pokemon!!!

Therefore, coming across them is a very exciting moment indeed. However, it becomes tough to determine which one of these characters is more powerful than the others and the weaker ones.

The most-talked about Pokemon species is Pikachu. The cute fluffy, animated character won the hearts instantly with its excellent powers. Here are more than 15 most powerful Pokemon among so many choices, including your favorite Pikachu.

Undoubtedly, when it comes to mentioning the names of the strongest Pokemon characters of all time, Pikachu will top the list. This is because the yellow-looking cute creature has a superpower to defeat enemies with one stroke of electricity. Moreover, the extra soft cheeks of Pikachu make it look very adorable, but it can win over the enemies with a shot of the tail also.

After Pikachu, another terrific Pokemon is Arceus. As per the belief, this creature created the Pokemon Universe with all its high-class powers. Being the most powerful Pokemon, the base statistics are the highest in the case of this character.

This cute unique lizard form comes with lots of powers casting dangerous effects on the enemies. It has the capacity to fly up to 4600 feet and fight continuously by generating a powerful blaze. These fire attacks are devastating enough to eliminate the enemy completely. Moreover, solar power is a hidden trait of this flying Pokemon.

This flying dragon belongs to the Hoenn region and is believed to be the oldest Pokemon of all time. The legendary figure is only 25 inches in height but possesses tremendous power to attack the enemies.

This is another legendary Pokemon with incredible psychic capabilities. Being one of the strongest characters, within 2 seconds, it can sprint someone over 100 meters. Teleporting abilities are also special features of this shrinking yet intelligent character.

This member of Trinity Trio belongs to the Ghost type. It also comes under the Dragon species and looks the most frightening among the Pokemon characters. People often regard this Pokemon as the deity of natural disasters and other misfortunes, bringing death.

Generation VI introduced this incredibly powerful Pokemon belonging to Ground or Dragon types. The attacking speed of this weird-looking character is 95. Other features include 81 SP attacks, 95 SP DEF, and the power to raise 100 attacks.

Generation I is the first where this Pokemon emerged as the first one. By welding the spoons with special twists, it can defeat the enemies with the significant stroke called Kinesis.

This dragon Pokemon can generate poison with the clash of Shield and Sword. The special stroke is Eternamux Eternatus, which can finish the enemy with a single shot. However, this Pokemon did not emerge from any other form of Pokemon species.

The legendary dragon-type Pokemon made its appearance first in the Generation V series. It belongs to the Ice type and is a part of the Tao Trio, with Zekrom and Reshiram. Kyurem has an innovative capability to opt among the magical and physical attackers as per the need of the circumstances. The strongest moves are Draco Meteor and Dragon Breath.

Generation II marks the introduction of Ho-Oh to the world. Special attacks and powerful assaulting are the unique capabilities of this flying type dragon pokemon. Pokemon Heart Gold is the newly adapted version, whereas Ho-Oh is the Version Mascot.

The ground-type Pokemon came in front of the audience in Generation III. It is responsible for extending the continents and land areas and is thus popular by the name Continent Pokemon.

This legendary character of Pokemon belongs to the category of Water-Dragon. It works as an advisory to Dialga and pokemon Pearl’s Version Mascot. It received commands to ensure that the Universe becomes more meaningful for its natives with appropriate forms and other elements. It emerged in the story of Generation IV.

This Steel Dragon belongs to the group Creation Trio. Furthermore, it is a rival Pokemon for Giratina and Palkia and Pokemon Diamond’s Edition Mascot. Therefore, its role becomes more prominent in winning the overall battle.

With the capability to form the disastrous clouds to bring storms, this water-type dragon is fantastic, making the first appearance in Generation III. Manipulation of waters is its specialty, and thus Kyogre can engulf the land and increase the sea body.

Who is Maria Victoria Henao? Where Is Pablo Escobar’s Wife Now? Things To Know About