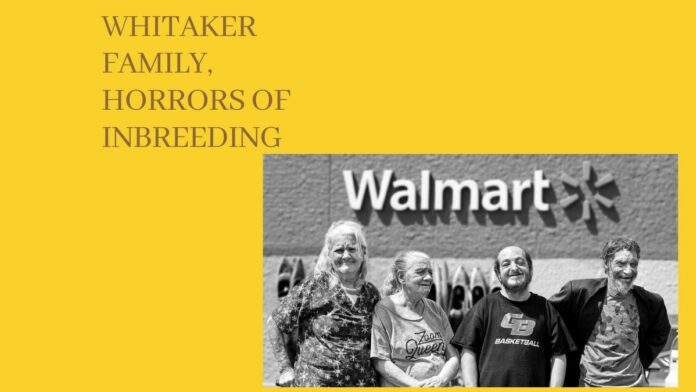 The adverse effects of inbreeding are prominent if you go by any medical journal. Of course, this process is common in animals and plants, but most human societies do not acknowledge such acts.

It is worse than what you may have seen in Game of Thrones. Truth is uglier and unexpected if you go through the reality of inbreeding and incest.

What Is The Story Behind The Whitaker family?

This article will describe the negative effects of an inbred family from West Virginia. Reports say that people used to feel scared at they looked at these brothers and sisters. It is about the horrific reality of the Whitaker Family on whose life a documentary came to light in 2020.

Mark Laita was the person responsible who did not bother about the neighbors’ warnings and proceeded to bring this family to the limelight. After close observation of the video captured in 2020, he came out with some astonishing facts about inbreeding.

He had to pay around four visits and finally let them speak their heart out to him. As a result, the audience learned about the horrors of such a mistake among humans.

Inbreeding refers to having physical relationships with the members of the same family. Most of the time, this happens between the first cousins.

Inbreeding can also occur in the sexual relationships between blood-related brothers and sisters or with either parent. The children out of such relationships are the sufferers of such inbreeding.

Mark mentioned details about each of the members of the Whitaker family in his journal.

Mark’s observations told us a lot of things. First, the mental conditions of three of the members of this family were not stable. For example, Ray used to grunt all the time without any reason.

Moreover, Timmy and Lorraine also did not act like sane persons. The financial condition of the family was very poor indeed. It was unexpected that someone could survive like that.

Medical studies tell that such a deformed state of body and mind results from being inbred children. Apart from the cognitive disabilities, several mental disorders and heart issues become prominent.

These things were thus common for Freddie, who died out of a heart problem, and his other siblings. Out of all the members, Timmy was the only cousin. However, there was no way to conclude that the parents of Whitaker had a blood relationship. The final video got more dislikes than likes.

The neighbors of the Whitaker family kept the situation a secret from the rest of the world. Hence, Laita had to give them lots of extra things like money, clothes, tasty food, etc., to let them talk freely without any fear.

Thus, the public may confirm that such inbreeding is a common phenomenon in that particular area of West Virginia. So now, it is better to analyze the defects that inbred children can have due to such abnormal reproduction processes.

Meaning And Results Of Inbreeding

When two persons of the same ancestry involve sexuality resulting in shuffling of the DNA, it is called inbreeding. Moreover, such a process of mating is not biologically permissible. Scientists proved that the offspring from this mating often becomes the victim of several genetic disorders.

The Whitaker family is of British origin without any proof about their past lives or parents. Furthermore, they do not feel comfortable socializing with anyone.

Hence, after taking the interview, Mark urged everyone to maintain a safe distance from this family. All the family members are under the strict supervision of armed guards to ensure that no third party comes near them or enters the premises.

Reason For Inbreeding in West Virginia

It has been said that the practices of inbreeding in certain parts of West Virginia were the causes of extreme poverty. The old pictures give the idea of the shabbiness and unfortunate conditions of the children.

Today, the anti-incest law prevails in most parts of West Virginia. But that does not prevent inbreeding to this date. In various parts, the people legally marry their first cousins and continue the practice of inbreeding.

Like the Whitakers, similar cases are there for The British Royal Family or the Cold Clan. However, it is evident from both the cases how harmful inbreeding can be for humankind.

It is an act against biological laws and hence leads to genetic disorders. The British Royal Family tried to protect their prestige by keeping the actual facts about the family members a secret. A similar history was there when Colt Clan forced his daughter to have kids with him, and the ultimate outcome was horrible.

There are still several questions about the Whitaker family that went unanswered. Moreover, Mark was unable to identify their past and true age. High possibility that they could have a strong connection with some powerful personalities. But then why are they living the life of a popper? That will be a mystery forever.