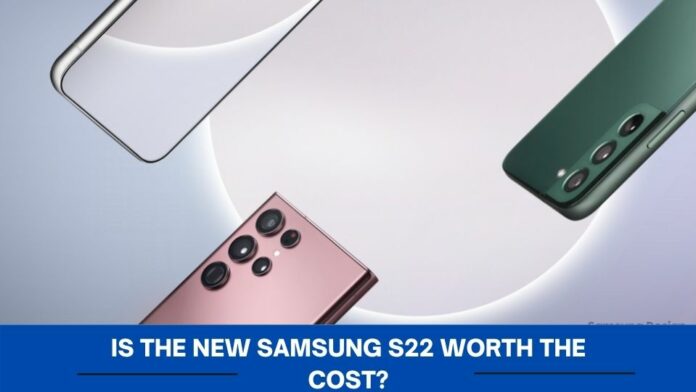 Everyone wants the best of the best when it comes to smartphones, which is why the Samsung Galaxy S22 Ultra is so coveted. However, the Ultra is priced at a hefty $1,199.99 starting point, which is prohibitive for many buyers. Furthermore, not everyone wants such a big phone, and for some people the cheaper alternative is a better fit.

That is where the Samsung Galaxy S22 comes in. It is the smaller sibling of the Ultra, with a much more reasonable price (starting at $799.99). Despite its lower price and smaller size, it comes with many of the same features. But is it worth its price? And if not, should you simply splash out for an Ultra?

You can get your new S22 on a payment plan, but don’t forget to factor insurance into your monthly budget. The good news is that you can get cell phone insurance at a cheap price by adding it to your renters or homeowners insurance policy. Insurance is crucial, as it is all too easy for your phone to get lost or stolen, but rather get it from your insurer than from your mobile provider.

If you have the budget to spend on the S22, here is what you can expect.

As with any Samsung smartphone, the S22 has a sleek design, even if it is smaller than other models. With a 6.1 inch screen, it is similar in size to the iPhone 13 and they kind of look alike. The differences are in the camera layout and the notch (or lack thereof) on the front.

The S22 does have a front camera cut into the top of the screen but it is subtle and pretty easy to forget about. The back has 3 cameras arrayed vertically. Aside from those features, it looks like your standard smartphone in 2022.

Color options include Phantom Black, Phantom White, Pink Gold, and Forest Green, all of which are attractive.

If you are worried about functionality with the S22, there is no need for concern. It does not perform to the same level as the Ultra, with its lower processing power, but is an upgrade on its predecessors. However, that upgrade is not particularly significant. Unless you are upgrading from a much older phone, you probably won’t notice the difference without running tests.

The S22 does offer facial recognition capabilities, but has not eschewed its built-in fingerprint sensor, which it claims is the more secure option.

Software-wise, the Samsung Galaxy S22 runs on Samsung’s One UI 4.1, laid over Android 12. This provides the best of both worlds, with Samsung’s excellent setup working in tandem with Android.

The S22 has 5G capabilities, so if you are on a plan that supports 5G and in an area with coverage, you will get supreme mobile data speeds. Of course, this also means that your data could get chowed very quickly if you are not careful to ensure settings prevent big downloads on mobile data.

The cameras on the S22 provide an excellent product. Of course, the Ultra has significantly better cameras, but the difference is not as monumental as you might think. Unless you are taking photos to use in a professional setting, you won’t go wrong with the S22.

Portrait photography mode has made it to the S22 and does a brilliant job at making human subjects look professional. It is a great feature that users of iPhones have appreciated for the past few years.

The question is whether, at $799.99, the Samsung S22 is worth it. Well, that depends on what you want from your smartphone. If you want the standard excellence provided by companies like Samsung and Apple, this is how much you can expect to spend. If you’re comparing models with similar specs, the price is fairly standard.

However, if you want the best of the best, there is a significant price jump to the $1,199.99 Ultra. Most people cannot simply spend an extra four hundred dollars, and settling for the S22 is not going to hurt too much. While unremarkable among its cohort, the S22 is an excellent phone that provides all the functionality the average person will need.