In news that came as a shock to all Euphoria fans, Barbie Ferreira,...
HomeEntertainment‘Making The Cut’... 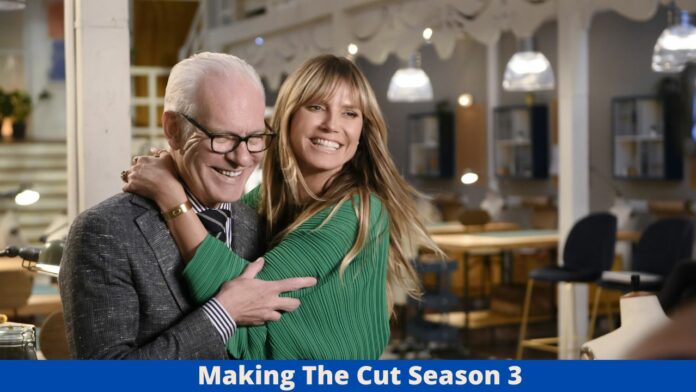 Tim Gunn and Heidi Klum, fashion industry pioneers, produced and directed the acclaimed design competition series “Project Runway” for sixteen seasons. In light of the show’s widespread popularity, the pair decided to branch out and pursue a new venture in 2018.

The show’s first season premiered in 2020 and follows 12 designers as they compete for a $1 million prize to invest in their businesses and increase media exposure. Gunn gained a great deal more artistic control with this new beginning. The show will follow the same format as the previous two seasons.

They were having far too much fun with their new job to leave for the second season. With Season 2 of “Making the Cut” coming to an end, fans are curious as to whether a third season will be produced. Here is everything you need to know about season 3,

When Is Amazon’s Making The Cut Series Set To Premiere?

Although no information has been released on the release date of the fashion reality series’ filming, we do know that it will return sometime in the Summer of 2022.

Season one premiered in March 2020, and season two in July 2021. Amazon typically releases two episodes per week. Each episode lasts about an hour.

The first two seasons are currently accessible on Amazon Prime.

What’s New in Season 3 of Making the Cut?

Season 3 of the show will feature ten emerging fashion designers competing for a $1 million investment in their company, a collaboration with Amazon Fashion, and the opportunity to create an exclusive line of fashion for the Making the Cut store on Amazon Fashion. Making the Cut, like many other reality television shows, is recorded in Beverly Hills, California, including runway sites on Rodeo Drive, Vasquez Rocks, and a downtown Los Angeles tower rooftop, according to TV Insider.

There is not much else known about Season 3, other than it is scheduled to premiere in the summer of 2022. Apart from Richie and Scott, other details about the Making the Cut season 3 judges and competitors are expected to be revealed as the show approaches its premiere.

Season 3 Host and Judges of Making the Cut

Heidi Klum and Tim Gunn, the show’s co-creators and fashion aristocracy, host the fashion-focused show. The pair rose to prominence as a result of their appearances on the reality show ‘Project Runway.’

Klum is a German-born model, media personality, and businesswoman. Among her numerous accomplishments over her extensive and successful modeling career is being the first German model to be chosen as a Victoria’s Secret Angel.

Gunn is an author, television personality, and actor. From 2000 to 2007, he was a member of the faculty at Parsons School of Design, where he served as chair of fashion design.

The second season’s judges panel included Jeremy Scott and Winnie Harlow. Thus, if a third season is produced, we may witness the addition of new judges to the panel.

While the first season had twelve designers, the second season featured ten. As a result, if the series is revived, we may anticipate the third round with ten to twelve designers.

Andrea Pitter won season 2, while Gary Graham came in second. The next third season will have a new generation of designers competing for $1 million in rewards and other incentives.

The Cast of Making the Cut’s Third Season

Heidi Klum and Tim Gunn are expected to return as the series’ co-hosts. This is uncertain with regard to the judges. The show might have remained judged by model Winnie Harlow and fashion designer Jeremy Scott, but the first season had to change judges.

Regulations governing pandemic filming will almost definitely dictate the specific decision. The primary judges’ attendance contributed to preserving a bubble during the filming of the second season.

Season three will follow a similar format to the previous two. A group of designers will fight for a $1 million investment in their brand and the opportunity to sell on Amazon Fashion. It’s all about demonstrating their superiority as a designer by surmounting all barriers.

Is There a ‘Making The Cut’ Season 3 Trailer?

There is currently no trailer for the season. We would not expect to see a trailer until around a month before the film’s scheduled to premiere. Let’s watch the trailer for the previous season below,