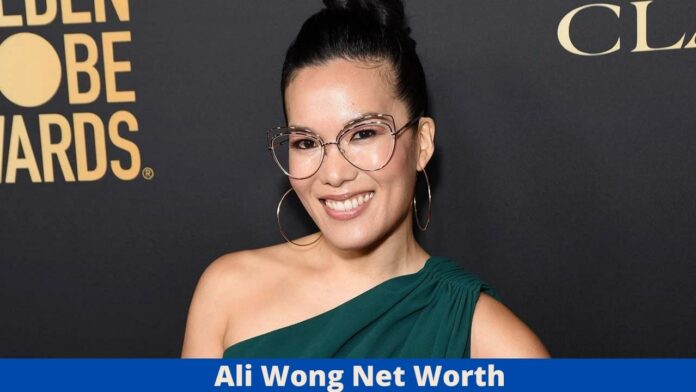 Wong previously starred in Inside Amy Schumer, Black Box, and Are You There, Chelsea? She was a writer for the comedy Fresh Off the Boat’s first three seasons. In the cartoon series Tuca & Bertie, she voices the title character Roberta “Bertie” Songthrush, and Ali on the animated comedy Big Mouth. She was named to Time’s list of the 100 Most Influential People in the World in 2020.

Ali Wong’s net worth was estimated to be $3 million. She gained money through her work as an American comic, actress, and writer.

Alexandra Dawn Wong was born on April 19, 1982, in San Francisco’s Pacific Heights neighborhood. She is the youngest of four children. Her Vietnamese mother, Tam “Tammy” Wong, immigrated to the United States in 1960 to work as a social worker. Her Chinese-American father, Adolphus Wong (1937–2011), was a 30-year Kaiser Permanente anesthesiologist.

Wong graduated from San Francisco University High School in 2000, where she served as class president of the student body. She enrolled at UCLA, where she studied Asian-American studies and discovered her passion for performing as a member of the university’s LCC Theatre Company, the largest and oldest Asian-American collegiate theatre company in the US. She worked at The Lair of the Golden Bear, a UC Berkeley alumni summer family camp, and spent time in Hanoi during her junior year. In 2005, she earned a BA in Asian-American studies summa cum laude. Following graduation from college, she studied in Vietnam as part of a Fulbright program.

Wong attempted stand-up comedy for the first time at the age of 23 after graduating from college. She quickly relocated to New York City to pursue a career in comedy, where she began performing up to nine times a night. She was named one of Variety’s “10 Comics to Watch” in 2011.

She appeared on The Tonight Show, John Oliver’s New York Stand-Up Show, and Dave Attell’s Comedy Underground Show shortly thereafter. Additionally, she was cast as a series regular on NBC’s comedy series Are You There, Chelsea? and made an appearance on Chelsea Lately. In 2013, she appeared in VH1’s Best Week Ever and MTV’s Hey Girl. Additionally, she starred alongside Benicio Del Toro and Salma Hayek in Oliver Stone’s Savages and Kate in Dealin’ with Idiots.

Since then, she has appeared as a guest star on multiple episodes of Amy Schumer’s Inside Amy Schumer. Since 2014, Wong has contributed to Fresh Off the Boat as a writer. Wong was proposed for the writing role by Randall Park, who is also a member of the main cast.

On Mother’s Day 2016, Netflix aired a stand-up special titled Baby Cobra; the program was taped in September 2015 at the Neptune Theater in Seattle, when Wong was seven months pregnant with her first child.

According to New York Magazine, “the special’s Netflix debut is the type of moment that unifies the unlikeliest admirers.” On September 11, 2016, Wong spoke at and walked the runway for the Opening Ceremony’s show during New York Fashion Week. Wong joined the cast of the ABC sitcom American Housewife in October 2016. Wong’s second Netflix special, Hard Knock Wife, premiered on May 13, 2018. It was filmed in Toronto’s Winter Garden Theatre in late September 2017 while she was seven months pregnant with her second child. In an episode of OK K.O.! Let’s Be Heroes in 2018, she voiced Citrus Twisty, a soda genie.

Wong co-starred in the 2019 Netflix film Always Be My Maybe alongside Randall Park. The film was directed by Nahnatchka Khan and co-written by Wong, Park, and Michael Golamco. In the Netflix animated series Tuca & Bertie, Wong voiced the titular character Bertie. Wong released a book titled Dear Girls: Intimate Tales, Untold Secrets, and Advice for Living Your Best Life on October 15, 2019. She refers to it as a life manual for her two daughters to read as adults.

Wong met Justin Hakuta, vice president of product at GoodRx and son of inventor Ken Hakuta, in 2010 at the wedding of mutual friends. They tied the knot in 2014. They have two children, Mari and Nikki, and Wong has been candid about miscarrying twins prior to conceiving her first child. She remarked that making light of her miscarriage assisted her in coping.

Wong and Hakuta announced their divorce in April 2022.

Ali Wong is divorced. She married Justin Hakuta, vice president of products at GoodRx and the son of inventor Ken Hakuta, in 2010 at a wedding of mutual friends.